Workers at the Heinz factory in Wigan stopped work on Wednesday, leading to the production of an estimated 2 million fewer cans of beans and other foods. They are striking against a below-inflation pay offer, which has been combined with attacks on sick pay and changes to the bonus scheme. 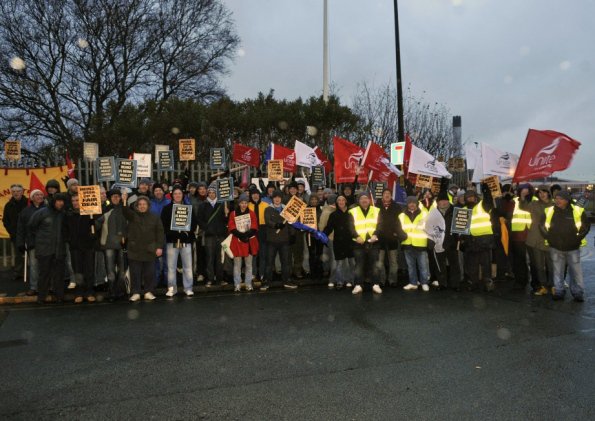 91.4% of the Unite union members at the Kitt Green factory had voted for strike action, despite Unite negotiators having previously recommended they accept a worsening of their living conditions. In the run-up to strike day, Unite officials talked tough, and declared that: "The company is treating its loyal and long serving workforce disgracefully[...]It’s our members that helped the company make its vast profits, yet it is still refusing to table an improved offer that reflects their hard work. Unless Heinz forks out a fairer deal, then strike action will go ahead.”

Indeed Heinz's profits are vast, and growing as they expand into emerging markets. Of course, all this means increases in production of far beyond 3.3%. Despite all this, Heinz bosses are using the local press to claim that the offer is one of the best in the sector, and are implicitly threatening closure by labelling Kitt Green their "highest cost" factory in Europe.

Unite leaders would like to avoid a total shutdown of the Wigan plant, because it would result in the loss of a thousand sets of membership dues. However, considering Unite leaders recommended that workers accept the original offer in September, it should be obvious that they will be negotiating to sell-out their membership behind the scenes. Though a second strike has been called for next Tuesday, all the 'militant' phraseology in the world cannot disguise the true role of union bureaucrats in 2010.

If you are a member of the media, or anyone else looking for further information on Heinz, please contact