Workers at the Heinz factory in Kitt Green, Wigan have voted to accept a revised pay and conditions offer, bringing to an end a dispute that had lasted months, and prevented the production of millions of cans. 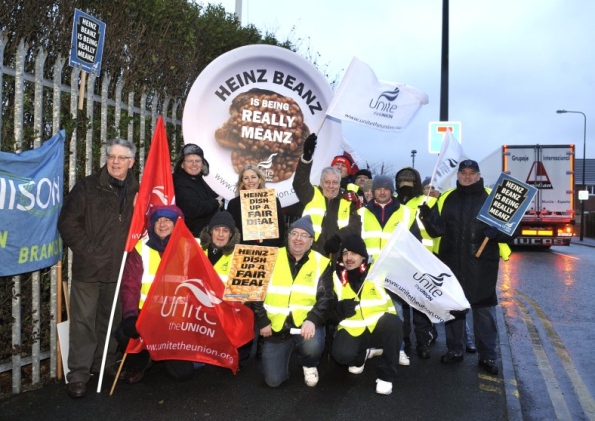 According to the Unite union, the offer was accepted by three quarters of voters, with a quarter hoping to hold out for a better deal. As it is, the 3.9% pay increase in both 2010 and 2011 is significantly better than the 3.3% rise that Unite bureaucrats recommended in September last year. The 0.6% gain is testimony to the power of solidarity, determination, and rank-and-file organisation.

However, there are significant limitations. 3.9% is far below the Retail Price Index inflation measure, which stands at 4.8%, and is expected to rise even higher over the next two years. Moreover, since the first ballots, VAT has increased by 2.5%. To put it simply, Wigan Heinz workers have now accepted a pay deal which condemns them to significantly reduced living standards.

The political responsibility for this lies with the Unite bureaucracy, which feigns concern for its own members' lives, but is most concerned about the union's bottom line, from which it funds its own, far more comfortable lifestyle. At a picket line speech in December, Unite general secretary Len McCluskey said he wanted a situation where workers could "get back to work, and make this company even more profitable." After leaving the platform, he joked "Now let's take over the factory!"

While Heinz already makes profits running into the hundreds of millions worldwide, McCluskey's aim is indeed to make their UK operations more profitable, to head-off the company's threat of moving away from the UK, and entailing the loss of membership for Unite. From this perspective, a 3.3% rise would have been better for the union leaders, and that's why they recommended that their membership accept it. The Unite negotiators then scrapped the 5th January strike, as a condition for Heinz's slightly improved 3.5% "final" offer being put to members. To the credit of rank and file workers, this was also rejected.

The discussion on the 'Heinz Strike Info' Facebook group shows the complexity of the situation at Kitt Green. While many are happy that the company have been forced up to 3.9%, others are unhappy that they will be worse off over the next two years, with one poster even suggesting that the 75% who backed the offer are "thicker than a whale omelette". Unite's Kitt Green stewards Ian Wright and Mick Quinn have threatened a couple of left dissenters with expulsion from the group - a profoundly anti-democratic move.

In the near future, Heinz will be back for more exploitation at Kitt Green, and workers must take their struggle out of the bureaucrats' hands if they are to achieve a more complete victory. The global economic crisis is reaching the point where taking over the factory will no longer be a laughing matter, but the only way forward. And why should workers beg for crumbs from the master's table, when it they who make his food?