Once again a much needed green growing space in a city cenre is trashed to make way for more concrete steel and glass... 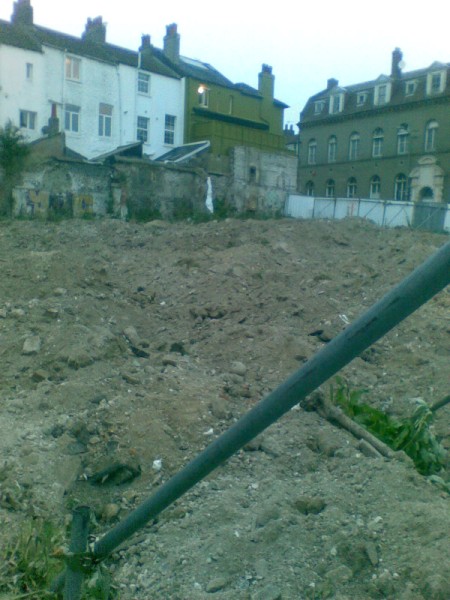 From growing space to dereliction - What a fucking depressing site. 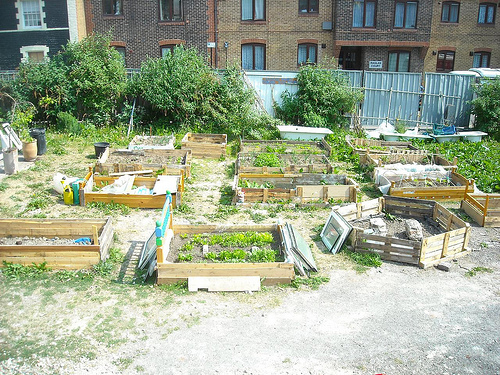 High Court bailiffs and sub-contractors acting on behalf of Littlehampton-based developers, Hargreaves, have completely trashed The Mound garden in Brighton.

They took the unoccupied site at 5am and have levelled the actual mound and destroyed 15 vegetable beds, four nursery planters, a pond containing newts (believed to be common and great crested which are protected and were clearly marked as such with a notice nailed onto signage next to the water) a wormery, local food composting area, water butts, a mini-reservoir and kids area including hopscotch which had become popular with local school kids.

In a sinister move Hargreaves seemed to have known that the main group of gardeners were going to be elsewhere (private investigators were employed to spy on Lewes Rd Community Garden during their tenure from May 09 to Sep 2010) and by 8am when the first arrived the game was up. He managed to get in the way but was arrested on an obstruct police rap and released later that night. Three thug security remain on site.

This happens after a weekend which saw growing community involvement with new veggie bed construction, a seed-bomb workshop for kids and a picnic. As with a usual weekend hundreds of visitors came and went. Since opening in January, the space has been trouble-free and one for growing and encouraging nature (pied wagtails, blackbirds, great tits had started to inhabit the now uprooted budlias) .as well as local grassroots action to take back derelict and unused land from developers who plainly don't give a fuck.

And what about Hargreaves (a schnidey outfit specialising in out of town crap)? Because it's theirs they can do with it what they want - keep it derelict for the next two, three or even 15 years to come - just as it has been up until Januray 2011. Corporate social responsibility in action.

Their two latest attempts to develop here in 2007 and 2009 as a seven and then six story office block failed and although they still have planning permission for offices, their more lucrative residential plans have been thrown out for 'over-development'. So in the meantime they're holding out for a car park.