Mr King Eze Onuigbo’s removal Nigeria for Tuesday 1st November 2011 was cancelled but he is still in detention at Colnbrook. Many thanks to you all who supported in this hour of need. 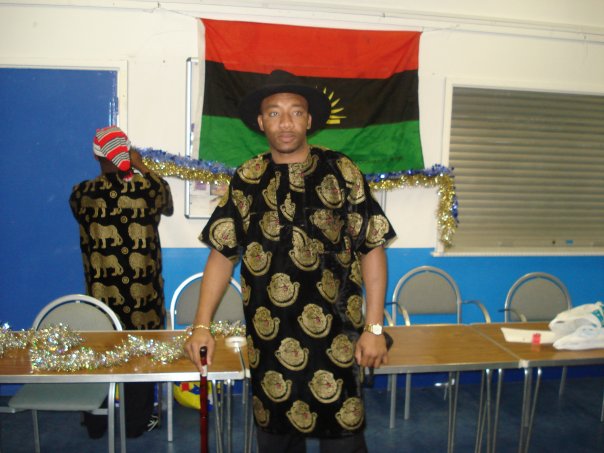 He was overwhelmed by this unprecedented support and solidarity extended him. He said, “Please, extend my heart-felt gratitude and appreciation to all these men and women of goodwill who supported me from all over the UK. My deportation is cancelled for now but I am still in detention. I still need your support get out of detention and to live in peace in the UK”.
Mr Onuigbo got married after his arrival his in the UK in 2008.The UKBA is now disputing the authenticity of his marriage and has subsequently withdrawn his residence permit. But the greater danger is that if he is removed to Nigeria, he would be harmed, if not killed in Nigeria because of political views and activism for Biafra actualisation.
Mr King Eze Onuigbo is a brave Biafran leader with immense contributions to the cause of Biafra Actualisation project. He has lead campaigns against the Nigerian government together with other Biafrans in the UK against the Nigerian government continued killing of the Biafrans in the South Eastern Nigeria especially members of the Movement for the Actualisation of the Sovereign State of Biafra since 2001 till date.
HISTORY HIS BIAFRA ACTIVISM
He arrived in the UK in 2001.His years of activism as a Biafran against the Nigerian government have clearly put him in danger that if returned to Nigeria, he would either tortured and imprisoned if not killed.
Mr Onuigbo was the founder of Biafran Peace Movement, a member of Biafra Liberation League, former MASSOB International, Biafra Liberation in Exile (BILIE) and the Good shepherd Movement (GSM) for which he is currently the president. All these organisations are all agitating for the actualisation of sovereign State of Biafra and to which the Nigerian government has been killing, incarcerating and torturing its members within the Nigerian State.
On 20th November 2006, Mr Onuigbo participated actively in disrupting the image-laundering project of the Nigerian government called ‘Nigeria Heart of Africa’, which took place at the Queen Elizabeth II Conference Hall. Till date, the Nigerian government is still looking for the protesters. Mr King Onuigbo’s participation in that disruption can be viewed via this link:

http://www.youtube.com/watch?feature=fvwp&NR=1&v=f5mNjp-ddvk
And the demonstration at the Nigerian High Commission at Northumberland Street can be seen here:

http://www.youtube.com/watch?v=9R0WxiLKgYE
The Home Office Operational Guidance note 2009 states that, "In the southeast over 600 people were arrested and detained during 2005 on suspicion of being members of MASSOB"
"Demonstrations in September 2005, following Biafra Day on 26 August 2005, claimed a reported 6 lives although other local reports indicated as many as 200 may have been killed by police. Ralph Uwazurike, the leader of the group, was arrested in October 2005 along with 6 of his deputies on treason charges."
"According to MASSOB figures, more than 100 MASSOB supporters were in detention as of March 2006".
“... those that take part in illegal demonstrations or other illegal activities [eg raising the
“Biafra” flag or being in possession of “Biafra” currency] may face arrest and
prosecution for any offences that have been committed"
The danger to his life has not yet been removed. Please, help stop his continued detention.


What you can do to help / Please take urgent action now

1) Email/Fax Theresa May, Home Secretary. Ask her to exercise her discretionary powers to stop the continued detention of King Eze Onuigbo and allow him protection in the UK as he as he would harmed if removed to Nigeria or killed. Please remember to quote King Eze Onuigbo’s Home Office Reference number: O1142828 in any correspondence.


2) Email/Fax Nick Clegg, Deputy Prime Minister: Ask him to intervene with the Home Secretary Theresa May to stop the continued detention of King Eze Onuigbo and grant him leave to Remain in the UK as he would be harmed, tortured, imprisoned if not killed in Nigeria if removed. If you do please remember to include King Eze Onuigbo’s Home Office Reference: O1142828 in all your correspondence.

Write his MP who is Joan Ruddock:
Please email

joan.ruddock.mp@parliament.uk or use the form below