The movement of the etcetera

“As a social forum, a thousand things happen at the same time and this is how thing flow. The square is beginning to fill up. Having a thousand things and a thousand different ways is a path towards no turning back!” Rodrigo Bertame at Occupy Rio. 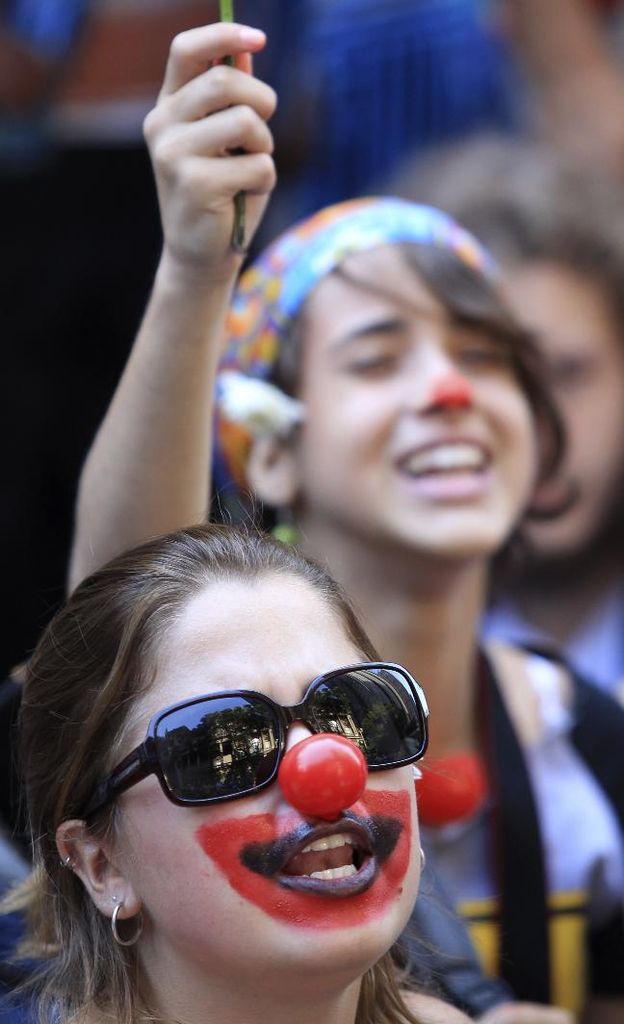 The encampment in Rio has now completed its first week. For those who are living in the camp, their days and nights there have been so much more. The occupation has not only radically transformed space, like time, it has become denser and richer, saturated in creative and unexpected moments. If Cinelândia square already had its daily routines chronicles, now they have multiplied a thousand times and more. Everyday is a whole world and a thousand things happen at the same time.

The history of the encampment is the history of its meetings, of its convergences and of its divergences. The initial risks taken and drive for an immediate identity and consensus no longer make sense. Much more than just a self-organised collective, the encampment has constructed itself as a passage way and thoroughfare. The occupations is not merely self-organisation as a form of self-sufficiency but rather as a form of autonomy. There is no inside and there is no outside, therefore, the occupation has taken on the form of a certain ritual for those who still have not participated, identifying themselves with the “elders”. You just have to go and just have to do, which in itself, automatically, is already participating. The assemblies reduce and de-bureaucratise the encampment. No longer viewed as the culmination and axis of the process. Although important it is momentary. No structure can truly represent the creative elements, the mutation, the resistance, the reinvention of daily life. Traversed from all sides, the occupied square will amalgamate itself with the fluxes of the city and its concrete demands.

Everyday, Occupy Rio qualifies itself, intensifies itself and gives value to itself. Already, there are more than 150 tents. There are generators, a refectory, small theoretical workshops, stages and an open microphone. There are semi-permanent working groups (GT´s in the original Portuguese), providing food, social activities, security, theory, queers, art and culture, anthropophagy etc, anti-work, affinity groups, self-organising collectives, and even a GT of love. Although predominately constituted by youth between 20-30 years of age, all ages are present and represented. It is an undefined dynamic process without leaders or a single dominant group. If there are punks then they are not limited to easy anarchy, if there are self-organisers then they do not want to isolate themselves, if there are Marxists then they don’t bring their Marxisms with them, and if there are hackers amongst us then they have learnt to dance etc. They all build upon common spontaneous relationships, which happen at the time, without an excessive concern for an immediate consensus. It is a movement of the etcetera. It is an immense, heterogenic and nondescript etcetera. Because of this, the assembly doesn’t have to become obsessed with fear and risks, malicious or opportunistic, as if there were a set mission to “protect” the people and preserve the purity of the movement. They don’t need this, because they are not dumb. They are like cats that were already born poor and free. Has anyone ever seen a clowder of cats?

This etcetera is simply not represented by institutional politics or by the mainstream press or within business culture. Their desire to exist has not been enunciated or articulated, they could not be seen, nor were they there to be seen. This etcetera is a dynamic process which has composed itself as a class. Not just as a choir which sings with one voice but as a choir which sings with many voices, instead of the towed editorial lines of political parties and major newspapers which present themselves as polyphony. Which is not just anything. Just see how the apparatchiks from PSTU and the anti-corruption agenda of Veja magazine were spontaneously rejected.

There are extended links with other movements opposed to home evictions, the martial enforcement of ‘public order’ (o choque de ordem in Portuguese), the development of the Belo Monte dam, the selective and racist criminal justice system, the criminalisation of social movements in general; the recognition of informal work, a free culture, a more open and qualified education system, for a real democracy which goes beyond mere representation by the state and the market. If Occupy Rio is towards the left then it is certainly not towards the left which governs this country, found within the party apparatus or the confines of academia. The word “Capitalism” is overheard often during the debates, considered and criticised. Reading groups have been organised discussing such themes as the Multitude, proposed by Antonio Negri and Michael Hardt. Everything is very conscious and very politicised. Sometimes people come to summer camp and suddenly find themselves doing politics and sometimes people doing politics will find themselves enjoying summer camp. And etcetera!

In fact, everything here has a political dimension. There is no simple separation between practical questions and political questions. When considering security, you should avoid creating another police force and think instead of the relationship between homeless people, street sellers, municipal police, and the morning pickpockets onto a winner in the square and maybe trying to find convergences and form closer ties. Even the provision of food is not simply an internal problem, in as much that the food is not planted by them, but instead comes from the city and is dependent upon other relationships.

Occupy Rio doesn’t have a finish date. It is a permanent and continually mutating protest. The advantage of collaborative networks is that that protests can be held either in a square or in a march and can be returned to virtually and so on and so forth. The real and the virtual are not opposed. If tomorrow there are some type of acts of cowardice and violence by the powers that be, then the movement will continue and the movement will grow. After all, people are all the same, or rather, they are not all the same.

Bruno Cava; Translated from the original Portuguese by Kevin Lynch