About 30 anti cuts demonstrators from various activist or community groups in Liverpool gathered outside the town hall to protest against the public spending cuts being implemented by the council on behalf of the ConDem government. 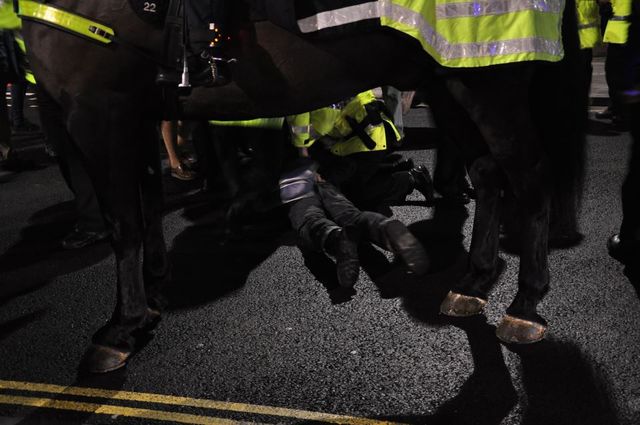 There is a protester under that pile, photographer: Michael Kirkham

As soon as we arrived the police informed us of a 'specially designated protest area where you can make as much noise as you want,' that was nice of them allowing us to excercise our right to peaceful protest in a designated area, needless to see we stayed out of the pen and in the street (which was closed and is our legal right). there were an unusual number of police and even two police horses, what were the police expecting? how was tonight different from the countless other anti cuts protests?

Chants of 'when they say cut back we say fight back' and 'no ifs no buts no public sector cuts,' were shouted through the windows to the council chamber, a police officer attempted to single out a young man and use force to take him away from the group, as this gathered attention from the crowd the police gave up and decided to speak to him at the scene.

'This has escalated and is no longer a peaceful protest, please move back to by the entrance,' so our behaviour would be entirely peaceful again if we moved 10 yards down the road? We maintained our peaceful protest on the grounds that the police officer was making a request not an order and had no legislation to enforce his demand.

As he walked away the officer was seen frantically on his radio, and soon after a group of officers walked off around the corner, people became suspicious of a kettle, and then a large group of matrix police led by the two horses came around the corner, the horses were controlled right through the crowd (I say controlled because I dont believe the horses were acting maliciously, the police officers on their backs however had very malicious intentions),

'Theres no excuse for animal abuse' now replaced the anti cuts chants as the protesters escaped the kettle and headed onto Dale Street, protesters then blocked the road and where again walked at by the officers on horseback, as the police tactics turned less aggressive the group returned to chanting anti cuts slogans, the police then suddenly stormed the group, tackling and assaulting several protesters, the protesters had remained peaceful and had not provoked the attack. at least 4 have been arrested under 'section 5 public order.'

The protesters then began with anti police chants such as 'we won't take police brutality,' or 'no justice, no peace, fuck the police' as members of the public gathered they took the side of protesters and filmed the lengthy, violent arrests, the police on the horses continued to walk into people, seemingly just to prove they could.

After a stand-off protesters decided to seperate now would be dangerous so they walked people from Occupy Liverpool back to the building, they were followed by police who attempted to harrass and bully anyone who fell behing the main group, as the group surrounded and filmed one bullying incident the police got back in the van.

The group marched into Liverpool ONE as the bollards would stop the matrix van following them, but police followed on foot displaying tasers. the protesters then dropped the Occupy group at the new building and headed off as a group.

There is no news yet about those arrested, and I can't wait to read the Liverpool Echo's negative spin tomorrow.

I hope the police who attacked the protesters today are proud of themselves, and I hope they remember their actions when they lose their jobs, another incident to show those more liberally minded about how the police really act, whose best interests do they serve?

Picture: There is a protester under that pile, and police horses being used to block cameras (photographer: Michael Kirkham)

Tonight, members of SolFed and AFed joined members of Occupy Liverpool and assorted anti-cuts protestors, in a protest against council cuts outside Liverpool town hall.

At its peak, there were around fifty people, and it followed a similar pattern to other protests at the town hall, mainly general chanting and heckling etc.

What was apparent at this protest was that, as the protestor numbers started to dwindle throughout the evening, the numbers of police officers started to increase. Around two hours into the protest, many extra police vans and Matrix units arrived, as did several officers on horseback, to chants of, “get those animals off those horses”.

The protest, whilst still relatively calm and good humoured, moved around to the front of the building, and blocked the main road. At previous protests, the police were happy to just ignore road blockages, but today they were not. They sent the mounted officers in to disperse people, which they did aggressively.

As things started getting a bit rowdy, several officers jumped on a young lad ‘for swearing’. They twisted him up and took him to the floor. An officer knelt on him, and warned him about swearing. He was then allowed to get up and leave. However within minutes he was again dragged to the floor and was subsequently arrested.

During the melee that ensued, a line of officer charged at us, resulting in several other protestors being dragged to the floor. I witnessed three people arrested, but others claim that it may be six or seven. Some were carried like logs or dragged across the floor, before being thrown in vans.

During the struggles to try and free people from the clutches of the police, one young comrade from SolFed got punched in the face by a police officer.

For the next half hour there was a stand-off. We remained stood in the middle of the road, and the police stood directly in front of us. To try and avoid further arrests, we moved away from the town hall and walked towards the town centre. Several police vans followed us.

At this point, we numbered around twenty. We tried to stay close together, however, as the group got divided, the police jumped out from their vans and grabbed hold of another comrade riding her bike, with her baby in a seat. Her crime? Riding on the pavement. She was able to avoid arrest as everyone else came running back and blocked the police from taking her.

We moved into the Liverpool One shopping centre, as the vans could not follow us in. The filth left their vans, and around thirty of them followed us into the centre.

We then made our way to the ‘occupy site’. At that point, an inspector was heard to say to a colleague, ‘we can leave them to it now’. They then kept a small presence at the occupy site, whilst other protestors dispersed.

It appears that the people arrested were ‘known faces’ from occupy Liverpool. Their behaviour was no different to anyone else’s, so it would appear the police had already decided who they were going to arrest.

Some comrades moved on to protest outside the local police station.

Click on the links below to see clips of tonight's events