With evictions up and down the country we can see a clear pattern of ethnic cleansing in action, excluded from society and looked upon as second rate citizens,the caravan act of 1968 to provide camp sites is no longer in force councils do not have to comply, so folk buy there own land ,but planning applications are often refused. 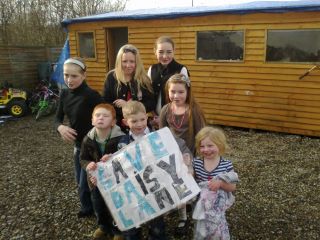 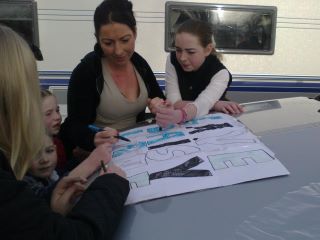 Folk of Daisy lane Rossett ,wrexham have been fighting eviction since 2007, reason the council are giving it is on a flood plane, yet nearly 5 years on and no flood,despite this the council are still refusing planning,it is a very small yard with only 5 pitches.
5 children are going to the local school and one infant going to nursery.
on the 25 january in Mold court a date was set for the 22 febuary for files yet again to be summited, then a date of 28 march for the final hearing, Eviction date.
the government has spend over £20 million in one eviction alone 2010-2011, this money could of been well spend in other areas.
Its a pure breach ,under the human rights convention, all nations signed, in europa as well as this country we are seeing roma gypsys kicked out of the country they so love, there is a pattern to which all governments are following, when they came for the jews you did not stand up they came for the gypsys and still you did not stand up, wait until its your turn,there will be nobody to stand up for you, at every level this must be stopped, all,ready the seed as been sown ,and we are allowing this to happen.
our communitys are being destroyed by governments and there plans.

Keep Britain Tory! Vote Liberal!
Good Luck ALL at Daisy Lane!
Love & Strength be with you !!

What we need is more social housing. You can't just house yourself! You need to be properly socially housed by the welfare state. We can't have people just doing things for themselves without government help. Think about health and safety. living in a caravan may not be safe! Think about the children, they will grow up having a different life experience to other children. Put them in some social flats and make them live like everyone else.

What we need is relaxation of planning laws for privet sector building corporations so that they can build affordable and executive housing on green belt land. And government support for privet banks so they can create affordable mortgages. The free market can provide for these unfortunate people but only if it gets unlimited support from the state.

So who gives you the right to tell and say how folk should live?
you sound to me to be a troll and local to rossett.
For one social housing is not the answer, has it not occured to you ,some of these places have a very high socially excluded people living in them and above all else our communitys are falling apart at the seams.
It is one who decides how the family lives not governments,be it a caravan ,flat or house.
Has it not occured that some folk just can not live in a house.
You should go and talk to some folk why they live there lives the way they do.
on another point social housing, housing associations rents are well above the fair rents set out by the welsh assembley, and i no by first hand account that some propertys are in sucg disrepair and damp it is behind belief, you go and live in social housing first.

Its obvious you are not aware of roma gypsys abroad, and the cleansing is in action in this country, as well,i remember the days no blacks ,no irish no travellers on pub and clubs up and down the country,98% of planning applications by travellers or gypsys are refused.
The land is not on green belt land, when councils want to sell this sort of land to developers they do so at a flick of a pen and what we see is executive housing being built, out of the reach of local people.
I really dont no what the problem is.

this is some what going of the subject, re executive housing, a report was done by planners liverpool, cheshire north east wales, the one we shall look at is dated 2006-2021, built housing in wales, cheaper housing for those working outside wales,same housing would cost more outside, this plan was going to go ahead until agroup was formed to stop it,
ie built in wales green belt not cheshire or liverpool so when i refer to being local, i mean folk who have lived in wales all there lives while excutives move in to the area, a typical ex house is in the region of £300,000, they can even join the so called jet set horseee types of cheshire,
PLEASE READ THE REPORT, and yes most housing in wrexham as been build on green belt land.

@ artfulldodger - Yep, agree with all that you said, but please try and leave the NAZI label out of it. It doesn't help your well reasoned argument, infact it's a turn off. This is not NAZI germany and using the term plays into the hands of those persecuting and commiting a genocide on the Palestinians. Cheers