Fascists score a win on the streets of Liverpool

On Saturday, , a mob of between 150-250 fascists ran free on the streets of Liverpool. As well as hounding a tiny demonstration against police brutality out of Derby Square, they were able to turn an Irish Republican march way from the City Centre. Yesterday was a definite win for the far-right and underlines the need for a serious re-evaluation of anti-fascist organisation.

I've said on numerous occasions before that we're seeing the return of the traditional fascist tactic of controlling the streets. The British National Party is in electoral decline, whilst the English Defence League's limited strategy of having people shout in a police kettle has disenchanted followers in much the same way as the left's penchant for A to B marches. However the splinter groups, in particular the Infidels, offer those up for it a more genuine chance to run amok whilst being free to be as violent and racist as they like due to the lack of electoral ambition as a moderating force. 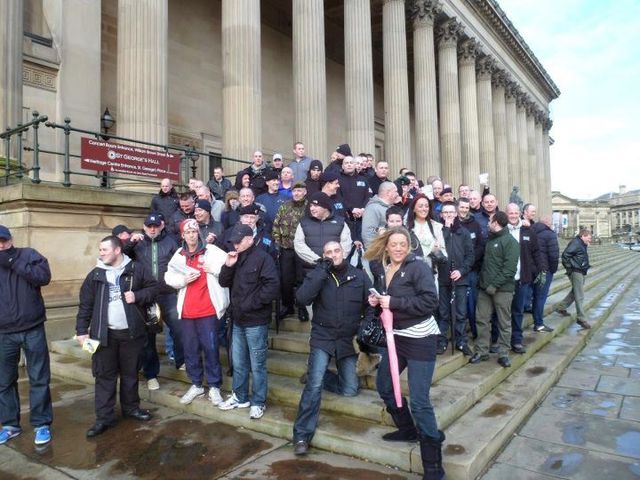 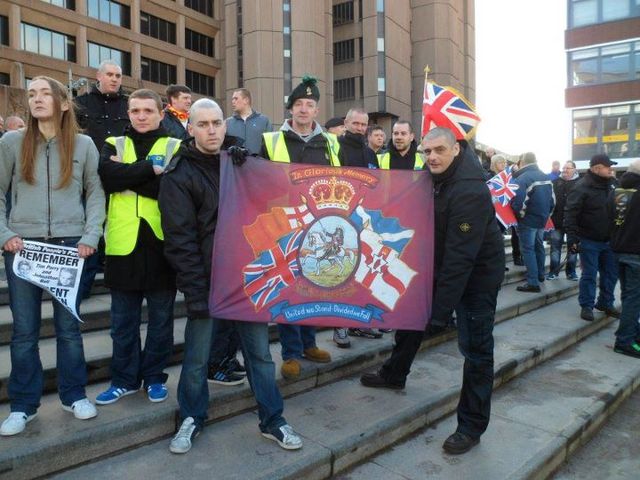 The response to this, however, has been at best inadequate. In theory, the fact that we're facing the biggest crisis in a generation and that we're seeing an upsurge in workplace and community struggles should have the left in the ascendancy. Instead, it remains stagnant to the point of stubbornness, with the left sects doing their best to co-opt grassroots movements where the bureaucracy cannot extinguish it altogether. In the midst of which, the threat of fascism is almost forgotten.

Unite Against Fascism, the best known incarnation of anti-fascism, is not up to the task. It never has been, in truth, but over a decade of the fascists being confined to electoralism and moderation after retreating from Anti-Fascist Action had given them some cover. Now, with a renewed willingness from the fascists to take on the left and use physical force, it has become apparent just how hollow a strategy of waving placards inside police kettles, marching away from confrontation, and propping up mainstream politics as a foil for the far right really is.

This is underlined by the fact that UAF has never mobilised against the EDL splinter groups. When they opposed the EDL in Leicester, it was down to independent anti-fascists to mobilise against the Infidels in Rochdale, as it didn't even warrant a mention by UAF. On Saturday, with the Infidels and Combined Ex Forces mobilising to "smash the IRA," the lack of BNP and EDL meant that as far as mainstream anti-fascism is concerned the day might as well have not happened at all. Hope Not Hate, even more wet and mainstream as well as being tied to the security services, give threats to Occupy Liverpool a mention but find Tommy Robinson's Irish heritage more interesting than physical violence against Liverpool's Irish community.

So what of militant anti-fascism, then? It's still here, in the sense that there are still those around who believe in a class response to fascism and direct, physical opposition to their presence on the streets. But the plain fact is that the movement that once existed currently doesn't.

Antifa fell off the radar several years back. The Alliance for Workers' Liberty's Stop Racism and Fascism Network failed to really get off the ground. Manchester Anti Fascist Alliance folded not too long ago. Other groups, such as Liverpool Antifascists and Brighton Anti-Fascists still exist, but certainly in Liverpool the ability we had to punch above our weight due to very active comrades has recently been strained by the pull of other causes in the fight against cuts, privatisation and the wider class struggle.

I say this not with any air of fatalism, but simply because the only way to build up and overcome your weaknesses is to start from an honest appraisal of the situation. The anti-fascist movement is in a dire state at the moment, and there's a lot of work that needs doing. In terms of which, discussions are happening internally, and soon hopefully across the workers' movement as well. We're not about to jack it all in and admit defeat, any more than we would march away from the confrontation and declare a victory where there was none, UAF-style.

One definite mistake made yesterday was that there was no public anti-fascist call out, locally or nationally. Liverpool Antifascists did mobilise, but that we did so amongst ourselves but were severely limited in numbers due to no demo being announced. This meant that any response we were going to offer to fascists who had mobilised nationally was going to be inadequate.

The Infidels, Combined Ex Forces and Casuals United assembled at St George's Hall from 11am, with the intention of going on to Derby Square for a static demonstration. Their reason for being out - the Irish Republican Flute Band march in honour of an Irish republican fighter called Sean Phelan - was kicking off from Kirkdale at 12.30 and marching into the City Centre. Already, the fascists' choice of muster point at Derby Square has hampered their plans and the march now had no idea of its end point.

The wild card in this was a demonstration against police brutality, also set to take place at Derby Square from 12pm. This had been called in response to police attacks on an anti-cuts demo outside the town hall, and was set to largely be composed of young and inexperienced protesters, mainly with a background in the Occupy movement.

In the event, that demonstration's presence in Derby Square largely confined us there as well, since the anti-fascist mobilisation effectively tripled their numbers and nobody would have felt comfortable leaving about ten kids to fend for themselves against a mob of baying fascists.

That was exactly what we faced, from the offset. The crowds pouring past jeered and hissed at the demo, instantly deciding that it was "pro-IRA" and therefore a worthy target. A couple of local boneheads decided to jump in and act like hardmen against the younger ones in the crowd, whilst the broader gathering of fascists only grew in confidence at the sight of this small opposition.

The police, for their part, apparently decided that the fascists were the perfect weapon to use on those demonstrating against them. Two fascists were ushered over to "have a chat" with the other demo, the fascists were allowed to half-surround the anti-police protesters, and the use of cameras by the far right coincided perfectly with a Section 60 AA order for all protesters to remove masks and face coverings. When this was, naturally, objected to, several officers barged into the crowd and started ripping face coverings off whilst threatening arrest.

This, understandably, panicked those who had come to demonstrate against police brutality. Fearing a repeat of the town hall incident, they moved away from the square and down the street. As the rest of us took heed of what was happening and made a hasty attempt to keep people together, they turned it into an unofficial march. Chants of "we won't take police brutality" rang out and a banner was unfurled at the front.

All of this whilst fascists continued to flow past towards their demo, sneering and snarling as they did. The situation had now become unsalvageable, and it was all we could do to intervene when boneheads tried to lunge at demonstrators. Several were able to throw punches, with the police response being to simply move them along, if not ignore them entirely. At the same time, the chants and flag waving continued as if this was all just part of the plan.

Ultimately, we herded the march to News From Nowhere, and disassembled it in the social centre. It was infuriating to concede the streets to the fascists, and a decision that will only see them grow in confidence for future actions, but we were essentially left with no choice in the name of safety. As it was, several passers by were still assaulted by fascists in town, and during the incident that caused police to block the road and turn the Republican march back, several people were assaulted there as well. All in all, an ugly end to an ugly day.

The events yesterday were in turns grim and frustrating, as well as frightening for those new to this kind of activity. But they should also serve as a wake-up call to anybody who claims to oppose fascism. This is not an activity for armchair activists, nor something you can outsource to "specialists." A violent ideology is growing on the streets, and we can only stop it by mobilising as a class to physically oppose them.

To those who would look to someone else to do this, I ask two simple questions: if not now, when? If not us, who? Fighting fascism is a job for us all, and it's about time we got to it.