On the Frontline with the Mayr-Melnhof Night-Pickets

And the Night was not Unruly ......
Night Pickets at the Mayr-Melnhof Packaging plant in Bootle, Merseside. 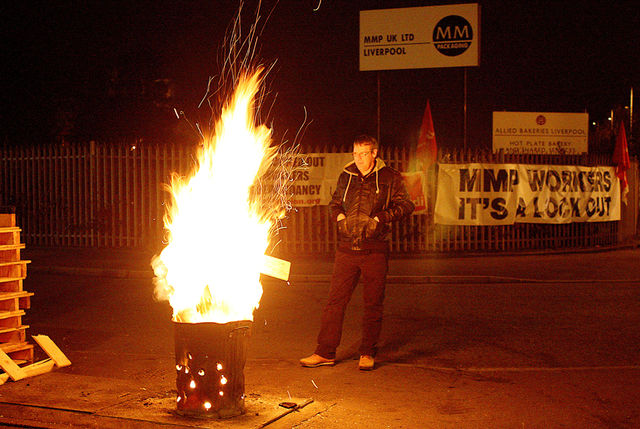 Locked Out at Mayr-Melnhof !

Locked out workers at Mayr-Melnhof Packaging (MMP) in Bootle have successfully stepped up their action after a "disgusting" offer from management. The workers, members of the Unite union, have been locked out for more than four weeks since the company announced 49 compulsory redundancies.
A newly introduced 24 hour rolling picket of the factory gates in Bootle have won support from colleagues and workers across the region and abroad.
The redundancy package recently offered was thousands of pounds worse than that offered in previous rounds--and included an unfair new selection method.

“Softly, comrades, “they” are sleeping,
And we watch them while the slow days steal away,
One by one, to resist we're going,
For our eyes not heavy growing;-
There is silence o'er the gate-house erst so grey;
For the management ranks are sleeping;
We are but the pickets, keeping
Watch and ward til break of day….”


Messages of support can be sent to:

Article and all Images © Stillshooter 2012

(Finally, Stillshooter would like to thank Graham Manley (Unite) Phil Potter (FOC, Unite) and All the Pickets on the Main-Gate at Mayr-Melnof Packaging, Bootle, Merseyside for all their kindness, support and friendship shown to him during this one particular Night-Picket without whose time and help the photographs and article would never have been possible)