Over the coming months claimants/activists in Liverpool will be combating Workfare. 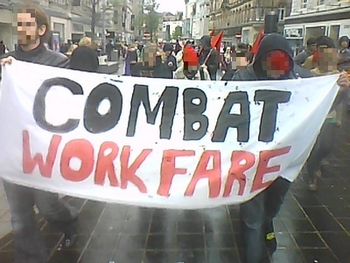 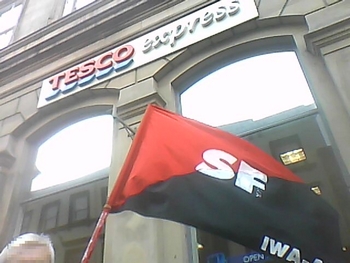 As part of a rolling series of actions combating Workfare in Liverpool, claimants/activists picketed slave labour stalwarts Holland & Barrett on Saturday 9th of June. Customers were successfully turned away from shopping in the Liverpool 'health' store after being informed of the companies Workfare policy and leaflets handed out to passers-by interested in what was going on. Unsurprisingly, a few H & B customers, propped up by the Gov's PR machine, took it upon themselves to regurgitate the bile that Iain Duncan Smith and Chris Grayling spew out on a daily basis. One customer in response to finding out H & B use workfare said, "well, it's better than sitting on your arse" - the implication being that all benefits claimants sit on their arses doing nout. Well, thanks for that sweeping statement straight from the bowels of the DWP shit-tank!

After Holland & Barrett, the 40-strong combat workfare claimants/activists targeted chintz manufacturers Argos, invading the shop floor with sirens & music. By this time, Merseyside Police --so outraged by the use of forced unpaid work-- joined the flying picket in 'solidarity'. One of our activists, maybe 4 or 5 years old, took great offence at the plod following Combat Workfare around the city centre and made her feelings known with megaphone chants of "Fuck the Police!”

Every attempt was made to engage the customers and staff at Argos about the company's flagrant use of Workfare and for the most part we were able to turn away customers from the store and inform staff that they are affected by Workfare as well.

The Work Programme claims to help people back into work by attaching the claimant to a private Work Provider for 2 years. The Work Provider is paid by results, so if they cannot get you back into work they don’t make a profit. This profit-incentive has encouraged Work Providers, such as A4e, to force claimants into unsuitable work & into unpaid work, touted as ‘placements' and/or ‘work experience’, at profit-making businesses.

Forcing claimants to work up to 30hrs a week for a month at a time, for no pay, provides free labour to companies, such as Tesco, Asda, Topman, Primark, Holland & Barrett & Argos; it also blurs the idea of voluntary work when you are forced into placements at charities, such as The British Heart Foundation & Age Concern. Local councils, hospitals and many other public organizations are using claimants as free labour under what’s called the Community Action Programme, which means you could be picking rubbish up in parks or changing patients bedding for 30hrs a week on NO PAY.

Not only is this forced unpaid work, it undermines the security & conditions of those already in paid work by giving managers the option of a steady stream of free labour.

Work Providers are also ‘parking’ claimants, who they deem as unprofitable/unemployable, on the sidelines of the Work Programme with no support or contact; and Work Providers, such as A4e, are being investigated over allegations of systemic fraud, centred around claiming money for job outcomes that never existed.

ESA claimants, in some case terminally ill people, are also being made “fit-for-work” by careless assessments, kicked off incapacity benefit or Employment Support Allowance and dumped onto the Work Programme.

"If you exploit us, we will shut you down!"

Our final target was devious Workfare bastards Tesco, who've brazenly stuck to using free labour despite sounding-off about withdrawing their participation from the scheme. We were able to prevent customers, via leafleting and discussion, not to use Tesco and the response from customers was overwhelmingly positive, with many refusing to shop there.

Over the coming months claimants/activists in Liverpool will be combating Workfare. The next direct action will take place on Sat 16th June:

https://www.facebook.com/events/315566365194170/ and we urge everyone to join in and shut down profiteers using forced unpaid labour.