A statement and poster about the real role of the European Union in the criminal Wars of the Transnational Elite, as well as in the Economic Wars launched against the European Peoples today. 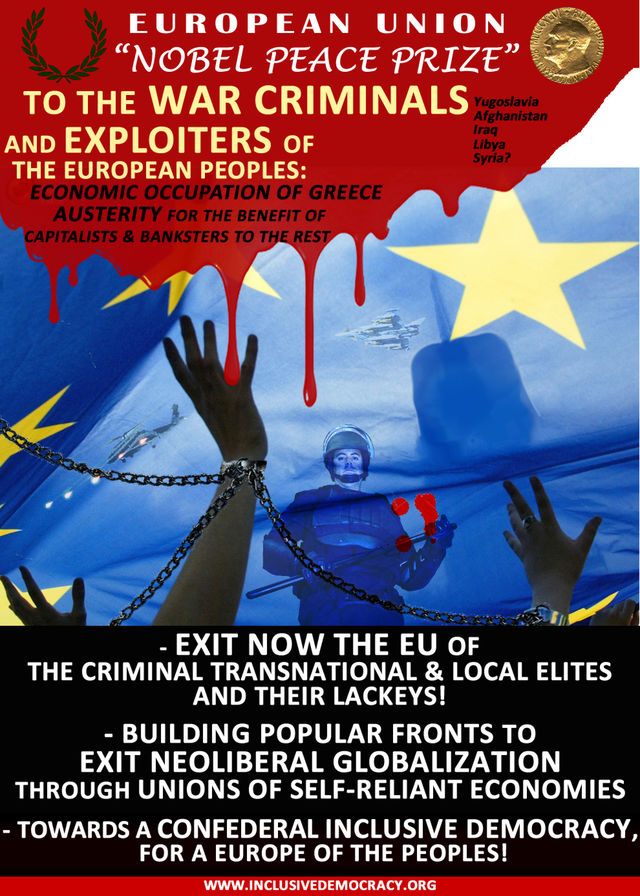 No one in the genuine Anti-Systemic Left should, of course, be surprised by the choice of the Nobel Committee for the Peace Prize. The Committee is, in principle, an instrument comprised by Academic and Bureaucratic stooges of the Internationalized System of the Market Economy and Representative “Democracy,” and the Transnational Elite, who control Neoliberal Globalization. From the awarding of the arch-criminal of the American Elite, Henry Kissinger, in 1973, to that of the big business Growth “environmentalist” Al Gore, and that of the American President (and War Criminal), Barack Obama, most choices of this adorning instrument of the System, have been on par with the priorities of the Transnational Elite.

This year though, the choice of the Committee was more instrumentalist and propagandist for the benefit of the Transnational Elite, than ever before. This is because the Committee chose to award, not just an “important personality,” but a pivotal Institution of the New World Order as expressed by Neoliberal Globalization and Representative “Democracy”: The European Union. And not only this, but they chose to award the EU just one year after the end of its criminal war against the people of Libya, where the European Military Machine, as part of the NATO brutal military machine, slaughtered scores of Libyan people. A people who resisted foreign intervention and the so-called “revolutionaries,” i.e. a small minority of the worst Islamo-fascist elements in Libya who, with help of similar imported criminals from all over the Middle East, were used (and trained) by NATO as its marines on the ground.

Not to mention, of course, the similar terrorist methods like those used in Libya, are being utilized now in Syria by the Transnational Elite, the EU technocrats and policy makers, and by the sleazy self-acclaimed “objective” Mass Media of the European Elites (BBC, The Guardian, Le Monde etc.). This, in order to prepare the ground for a new EU-NATO criminal military “intervention” in Syria with the help of the equally criminal regimes of the Gulf and Turkey, with the final aim of “regime change” in Iran, following the similar “regime changes” in Libya, Iraq and Afghanistan, so that the entire Middle East could be fully integrated into the New World Order of Neoliberal Globalization and Representative “Democracy”.

All this following the equally criminal role of the EU, fully supported as always in its wars, by the degenerate “Left,” the Greens and so on, which began with the operation to fully integrate Yugoslavia in the New World Order, after they had dismembered it and EU/NATO had brutally bombed it.

At the same time the slimy “celebration” of the EU Elites and of their Media and Academic stooges (and of many in the degenerate Liberal “Left”—most of them academics, whose research and other privileges are funded by the same EU) has not faded yet, the peoples of Europe are facing a brutal economic and even physical attack by the same Elites, with the same aim to fully integrate every people in the EU to the New World Order of Neoliberal Globalization. The only difference is that their own integration is attempted through an equally brutal Economic War which leads to the withdrawal of social and labour rights that had survived for almost a century, massive unemployment and poverty, the destruction of social health and education and the dismantling of any social service and social insurance system.

In the European South, and for the moment only in Greece, the local elites in collaboration with the transnational elite which administers Neoliberal Globalization and is represented in Greece by the main organs of it in Europe, i.e. the EU, the ECB and IMF (the Troika), have created an informal Protectorate of the EU and the Transnational Elite, in which all main economic decisions are taken by this troika, in a form of Economic Occupation that the country has never known before. This Occupation, which is differentiated from a Military Occupation, in the sense that an Economic Occupation is an Internal Occupation and not simply a Foreign one, takes place not only with the raw application of Economic Violence (mass unemployment, horizontally cutting down wages, pensions, abolishing the remnants of a pathetic social welfare, withdrawing collective labour agreements and introducing individual labour agreements, “Flexicurity,” etc.), but also with the unhindered use of Physical State Violence, and lately violence by an anti-immigrant racist organization, which is tolerated by the State and is fully backed by its security services (Golden Dawn).

The Crisis in the European South, which increasingly leads to its Latin-Americanization (in terms of salaries, quality of life etc.) and its Chinazation (in terms of Flexicurity, quality of jobs, etc.), is itself rooted to the integration of these Countries into the EU, and through it to the New World Order, as we have documented.

In fact, Spain, Portugal, and later Italy, are well on the road to become also informal Protectorates of the Transnational Elite, through EU, although they have not yet joined Greece in the stage of Economic Occupation. The South European peoples are simply paying the price of the uneven economic development imposed by the Internationalized Market Economy and the cut-throat competition imposed by Neoliberal Globalization —a fact which makes even more urgent the need for a new development based on self-reliance, within a new union of the European peoples based on the principles of solidarity and mutual aid.

Then, the elites, facing the prospect of bankruptcy of their banking systems and the dilemma of either bailing out their private banks at the expense of the peoples, or socializing their banks and creating new models of development based on self-reliance, they obviously preferred the former. The result of this choice was unprecedented Austerity measures being taken by the dominant Elites of the EU, with the entourage of State Violence employed mainly against the Underclass (England, etc.) who react to the usurpation of their lives. So, the European Elites (the Multinationals and Banksters and their lackeys in the political elites) in these countries are increasingly bailing out their losses due to the financial Crisis they themselves created, by transferring the deficits created by the bailouts (i.e. the burden of their crimes) to the people. From Education to Health, and from Welfare State to Social Service, all sectors of a once-upon-a-time strong Welfare State which was established during the Social-Democratic Phase of the System, after vast and bloody social struggles, are gradually collapsing, for the sake of the Private Sector and Liberation of all Markets.

All this is not accidental. The so-called “Nobel Peace Prize” is given to the EU while the European Elites are in the process of uniting themselves towards a Political Union of the EU, based on a Fiscal and Banking Union, which will decrease the instabilities of the System but will also deprive all members states of any economic and consequently political sovereignty. This means that the “World Government” that up to now existed informally (through the “G7,” etc.), is now being formally fomented. This implies that it is very likely that in the not too distant future the Transnational Elite may implement even a single currency for its Economic Domination in the Internationalized Market Economy, and that even more, power concentrated to the hands of the Elites, supranational Representative “Democracy” will be simultaneously implemented as the perfect political counterpart of Neoliberal Globalization.

In view of these nasty ongoing proceedings by the Elites, the peoples of Europe (and generally of the World), especially of the South, should join Popular Fronts in each country to exit EU (and generally the Institutions of Neoliberal Globalization, NATO, IMF, the World Bank etc.), as the first step towards the building of self-reliant genuinely decentralized and democratic societies, which eventually could be part of a Confederal Inclusive Democracy of the peoples of Europe, and beyond.

The International Network of Inclusive Democracy