For the first time ever (with many more to come), the fascist numpties of the EDL were vastly outnumbered in by trees. Saving their bus and train fares, antifascist campaigners in the Midlands left the anti-Nazi campaigning in Solihull town centre to us, the natural environment. Not afraid of bad weather (like the fairweather racists), we well and truly outnumbered an inconsequential fascist rabble repetitively chanting monotonous, moronic racist crap. 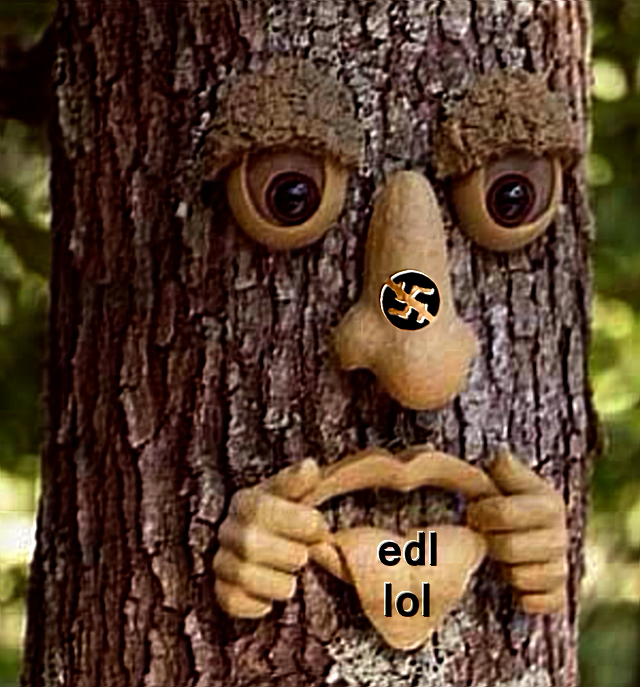 Elm, ash, oak, sycamore, willows, hawthorn and cherry blossom, we stood together in proud botanical diversity, rooted to the ground, refusing to budge while in-front of us, fascist lowlives swilled Stella, snorted coke, and raised stiff right arms towards the skies. We might have leaves instead of hands, branches instead of limbs, and drink only water, but we have much in-common with the fight against small-minded colonial British Nationalism and all it entails.

Just a few centuries ago, our timber was used to build slave ships, and in more recent times across the Atlantic, to erect the burning crosses of the KKK. By coming out and opposing the extreme right, we are returning the favour shown to us by the environmental warriors who built tree houses to stop polluting motorways being built roughshod through ancient forests.

Most stupid of all, at one point today, the handful of EDL who made it to Solihull were singing "God Save The Queen", assuming that royalty approve of their shameful drunken public antics. We don't support privilege or titled classes, but we must earnestly remind these docile nincompoops that even Prince Charles is fond of talking to trees, when nobody's looking. Which is more than can be said of the friendless EDL. There is little chance of expanding the Aryan gene pool when the EDL's entire dating vocabulary consists of grunts, snorts, burps and chants.

Unbeknown to the average EDLer, Cider making began in Normandy, France, but the particular brand of cider downed in great volume by hardcore white nationalist element which still attend EDL rallies, White Lightning, originates from fermented American corn starch, not the many rare breeds of apple trees growing in Britain and Ireland's finest rural orchards and threatened by changes to our ecosystem.

Talk about "British tree traitors" being disloyal to native species.

So much for white supremacists misappropriating the Tree Of Life, like they do the Celtic cross and the swastika....!

Whilst the average EDL meet/greet/get-pissed/chant & yawn would struggle to fill one of the old antique red British phone boxes on a good day, the EDL leadership still waste their time laying on empty coaches to EDL marches, fully aware their costly carbon footprints are contributing to the climate change threatening so many types of rare trees like us. Species cleansing is ironically being conducted by a political group with less solid brain mass than a hollowed-out woodland trunk.

Wishy-washy racial nationalists like the EDL prefer not to do their Holocaust denial in public when KKKev is watching (so as not to upset their pro-Israeli funders), but just like the BNP, their political wing the BFF are the first ones to believe in any nonsensical rightwing lie, hook, line and sinker.

The BFF/EDL openly state via social media, they do not believe in global warming. If "nationalist conservationists" had their way, there would be only broad oak trees growing in the British Isles. All other trees not part of Arthurian legend would be left to die. Over Christmas, Yorkshire EDL's Leeds Division (the dregs of the Leeds Service Crew - Leeds United LOL), publically announced that all Muslims should be deported from the United Kingdom, even people who are born in this country. Like British Muslims including white Muslim converts, we have nowhere to go, and unless the EDL stop wasting carbon mumbling incoherently about Muslamic Ray Guns and farting, we will one-day perish.

For that reason, we as Trees United, lent our hand to see of the fascist threat faced by Solihull from this rapidly declining but still divisive far right threat. Spread out through the green spaces and picnic areas of the town centre, unlike the EDL, we could not be kettled. We held our own until the drunken lumpen neo-Nazi invaders had swallowed their own puke one time too many, and decided, crestfallen, to hasten their retreat.

More "golden showers" than Golden Dawn, the cowardly defenders of all things narrowmindedly British, wouldn't have dared confront us in late autumn, when our mighty horse-chestnut trees shed our heavy, spiked conker pods onto their delicate middle-aged bald heads, or when our tree trunks are home to stinging bees and wasps that are attracted to the pungent aroma of stale sweat and rancid Stella.

Numbers steadily on the decline since Kev Carroll's ego got the better of him, and he arrogantly called everybody belonging to rival nationalist organisations "muggy mushrooms", though they are glad to see the EDL folding, anti-fascists were keenly looking forward to seeing the EDL's key organisers getting their just desserts at the jackboots of embittered dissidents such as Diddyman and Snowy of the NWI, under the guise of "Uniting The Right".

The hilarious sight of the twat with the Israeli flag and seig-heiling Celtic Cross banner-avers whacking nine bells out of each others arses with flagpoles, would have been a memorable moment of spectacular high comedy. Sadly for comedic purposes, thanks to Hel Gower, Kevin and "Special Agent Tommy" (or whatever he's currently calling himself), the EDL will be well and truly history long before their Manchester march materialises.