Things are getting desperate at the unregistered British Fascist Party (BFP). Unkle Kev Karroll (KKK) recently took over the rains of this piss-poor shambles of a nazi party when King Rat Weston jumped from the sinking ship and went all literary, but unbeknown to almost all the population, since last summer, an extra-special money-saving offer has been available to EDL / SDL and even "WDL Members"...... 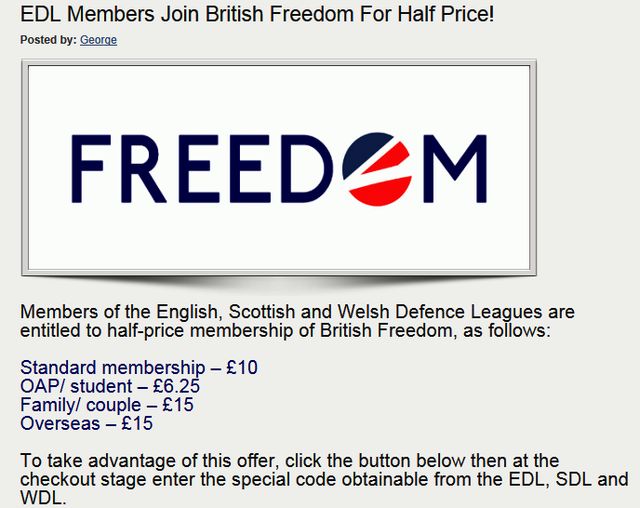 According to the BFF's very own tuppeny-bit webshite, you no-longer have to pay the full whack to join the EDL's "political wing" the British Fascist Party (known as The Fluffies). Simply enter the special discount code available from either the EDL, the SDL or the WDL....

Yes folks, the WDL... The Welsh Defence League who Jeff "The Stabber" Marsh had to apparently wind-up after they were all captured making Roman salutes with swastika tattoos over their arms (the whole lot of them), still in some alternative reality exist, and are there, ready and waiting to offer British Freedom Party discount codes for any potential BFF members.

Now this comes as a bit of a wee surprise to anybody who naively took Jeff Marsh at this word and believed indeed that the WDL were no more. (You can spam the clown on Twitter about this, lol). Jeff's Hitler-loving, Hitler-licking mates (most of whom were never Welsh) are still stealthily existing as the WDL, and since last summer, they have been waiting in Cardiff's down to heel backstreet boozers to offer money-off codes to Fluffy Fans.

We must take the BFF at their word, for after all, they are the EDL's representatives in "Parliament"... (in somebody's vivid imagination ... keep taking the pink pills, dear), so we have come up with some useful advice for anyone looking to take up this fabulous money-saving offer.....

Sadly, it appears take-up of discounted memberships has been pretty poor, and there is no mention of it on Martin Lewis's money saving website nor www.comparethenazis.com , which means only one thing - everybody who wants a discount BFF membership must meet up with the braindead losers in person.

If you are in England, this means a visit to the Midlands, in particular Luton, where on arrival, you must step off the train with tongue hanging out, ready to rim Tommy Robinson's sweet and cheerful ass. It appears he is still banged away in solitary at Her Majesty's Pleasure, but if you are pretending to be an authentic EDL member to get a reduced cost BFF membership, you must also pretend not to be in the possession of a brain.

When in Rome, do as the cretins do. To get said BFF Discount Code, thou must drink only wam cheap Stella, must lust after Hel Gower like she's a supermodel, and should be able to snort a line of coke in a minute (EDLers party trick). Their obsession with getting off their brains with rubbish beer and marching powder explains how the average EDLer can conjure-up enough courage to fantasise about sleeping with Hel Gower. Sadly, if only sleeping really meant sleeping. NFSE they say, and if Goddess Lel enters said hostelry and you are fixed up on the ultimate of blind dates, you won't be permitted to surrender with a headache. So remember to get bombed out of your brains adequately beforehand.

If you are in Scotland, och aye the noo, seek out the small soulless hostelry near Ibrox and start sobbing like a wee babby about Rangers not being allowed to be promoted this year. As if by magic, and army of pretend Scotsmen, complete with cardboard cut-out kilts will mystically appear on demand, to take advantage of the seemingly down-on-his-luck real Scotsman. Don't start using real Glasgow dialect of these South Of The Borderites will not understand you, but keep on using popular colloqualisms which rubbish English comedians use to joke about the scots. Oh, and drink only Buckfast. Not Stella!

To join the SDL, besides not having a brain like EDLers, you must openly hate black people, so bring a battered and bruised gollywog toy (available from the BNP) to the pub, and practise projectile vomiting on it. You must also be 110% anti-Catholic, so wear union jack trousers with a picture of the current pontiff on the backside. Things will go extremely well, until you dare to ask these "Muggy Mushroom" NF and BNP supporters to join the Fluffies, when one by one the plastic-neds will take turns to kick The Pope, and send you flying mid-air towards the back of the air, instead of giving you the hallowed discount code.

Welshmen, now this is what we have all been waiting for. You are on the trail of the Unholy Grail, a Raider Of The Lost Fart. We really don't know where to start with this one, as the WDL were supposedly disbanded over two years ago, upon the orders of Roberta Moore. Like the pretend-Scots of the SDL, most of the WDL are not Welsh, can't speak Welsh, and more than likely (Jeff Marsh excepted) don't actually like the Welsh.

You could always drop an anti-Cymru joke, the old chestnut, describing Welshmen as "sheepshaggers" in a Random Valleys pub, if you want to have the shit beaten out of you, or you could start making Hitler salutes in public next to a remote village war memorial whilst burning a Swastika, if you want to be mercillessly laughed at, by man, woman and child. Whatever you do, unless you are lucky enough to stumble across the Lost Tribe of Welsh Nazis, you are kind of fuckered, if you are wanting that BFF Discount Code.