The EDL In Manchester

The breakaway conspirators will arrive in Manchester for the EDL rally in their handfuls, ready to show their displeasure at North of England's street nazis being ignored by the EDL leadership Tommy Whatsisname and Emporer Kev Carroll, or at least that is their stated intention on Facebook. They call themselves the Northwest Alliance, and say they have nothing whatsoever to do with the EDL since their online public spat, but will continue to attend the EDL's rallies, just to be kind to Emporer Kev. 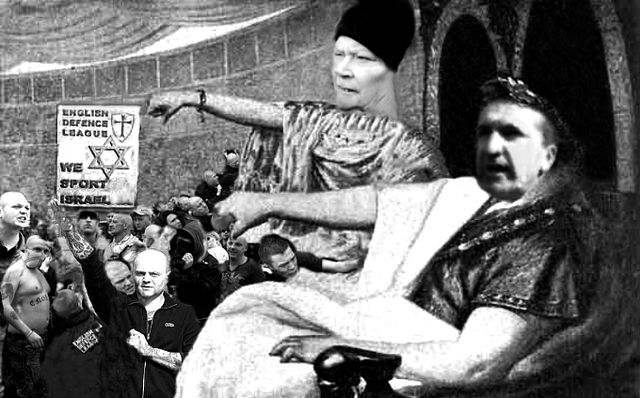 Tommy Gunn still banged up behind bars, this was the first time Emporer Kev was out in public, acting like he was "King Of The Castle" (King of A Miniscule Kettle in A Cornered-Off Part Of Piccadilly) as she swaggered out of the EDL's leadership limousine, waiting for the first Roman salute from devoted hardcore EDLers.

Someone, somewhere on Twitter, egged on by a llama harmer turned immigrant in Canada, said that Emporer Julius Carroll was gonna get his arse kicked by the Northwest Alliance.

Carroll, who had been up all night sending love tweets to pro-Israel fanatic Mrs Shitrit and stalking retired teacher Miss L Buttercup, laughed off all of these idle threats as pure conjecture. "They love me, really, fuckin' must do", he mumbled to himself incoherently, over and over again in his head.

He was having it no other way. After all, what "splitter" organisation in its right mind would exact revenge upon the EDL by dutifully turning up at its rallies. It just didn't seem to make any sense, even for the so-called "English Defence League".

It wasn't as if he didn't have doubts about his own safety. On the journey to Manchester, Kev Carroll snorted one line of cocaine too many, and dreamt about a pregnant sow wearing a crochless pair of knickers, becoming the spokesman of the EDL Angels (or Angles as they were often known). The sow told him that he should this time surrender, and not visit Manchester, but he wasn't going to turn back, and instead called the mystical sow all the names under the sun, and told her to "fuck off back to Essex".

After all, he was attending an EDL march where there was always in-fighting. Like all barons of the EDL leadership, he only ever did a runner from Ajax football fans.

The kettle was boiling up as the numbers swelled to 25. After waiting two hours just in case any more mugs would arrive, he had to get on with things, and so he grabbed the microphone and started talking absolute gibberish as always. Without his passport-faking control-freak of a cousin, poor little Tommy Gunn, on hand, Julius Carroll would be the ultimate control freak for the day.

Obviously he got booed, abused, and had whole bananas thrown at him besides the usual banana skins, (the complete lack of UAF members arsed to turn up and demonstrate against such a fuckwit shambles, meaning their were no black anti-racist protestors for the organised racists to chuck bananas and make monkey noises at, as they do), but there was no more in-fighting than you would normally expect at an EDL demo. Trying not to look in a mirror, he referred to Muslim people as "inbreds", and scapegoated just one community for a whole spectrum of child abuse cases, as he normally did, no change there.

The Stella cans were starting to get thrown left, right and centre (give them their due, EDLers would never waste cheap lager by throwing potentially fatal "whole cans" as missiles, as this would mean their dole money wouldn't make them as pissed as they had hoped. Using an umbrella, he batted away the empty cans thrown towards the stage, seeming quite confident, looking pleased with himself, pleased as punch. If he could survive an hour and a half of can throwing, the rest of the "EDL Vigil" would be a fucking doddle for Emperor Julius Carroll.....

So okay, Northern ex-EDLers hated his guts, most of them wanted him dead, but he wasn't scared of a load of flat-cap wearing, whippet-racing tripe-eating, black-pudding-ramming "muggy mushrooms". As he assumed himself (his brain on a par with the rest of the EDLers despite his wealth, class and intelligence, two separate things), owning a smaller brain meant having a shorter attention span, and importantly, a lesser memory. After a few more cans of Stella and a few more lines of Charlie, they would forget they ever wanted to leave the EDL. It was as simple as that for the EDL Emperor-In-Chief.

Most of the North West Alliance conspirators (NWA-ers Without Attitude) had stopped chucking stuff at Kevin, so he assumed most of them were happy to be EDL again. This didn't mean Caesar didn't want to humiliate them all at the first opportunity, calling everyone gathered (except the Southerners) "caveman Northern plebs". Spouting nonsensical crap for the first two hours seemed to work, as everybody was so bored shitless, no-one heard a word he said, and he was not lynched as would the EDL's hardcore neo-Nazis towards anyone of colour, given the proximity to a rope and a tree.

Casuals United had promised to turn up to provide some "muscle" to the Manchester EDL Pen, and keep the dissenters in line if they failed to show total and utter respect towards Emporer Carroll, and he naively believed their endless stream of boombastic tweets, however when push came to shove, only one man turned up, ironically the founder called "Joe Casuals" (not his real name), followed by three scampily clad underage teenage girls.

Seeming as though there was only himself, and the lack of danger from the inebriated, apolitical crowd, instead of relying upon weedy keyboard warrior Joe Casuals to be the Emperor's personal bodyguard, he was itching in the nether regions, so put him to work on a far more important, but more menial task befitting an EDL leader of his stature. A task ideally suited to somebody who claimed never to attend EDl rallies, but couldn't do without them (without becoming an even greater nobody).

"So much for all the revenge bullshit", Carroll chuckled, as the Northwestern Alliance's bestest fighters got completely messy on Stella and Charlie, bladders spontaneously erupting here, there and everywhere, making Manchester far wetter than it normally is.

"I've got them under my control again! They're mine, they're mine. They're all mine!", he chortled, as the rally continued without a seeming purpose. Even the racial abuse had ceased, when they racists forgot particular racist words to chant.

During the statutory (and yet ignored) fifteen minute's silence for Tommy Whatisname and his umpteenth "Fatal" hunger strike, buckets were rigorously circulated amongst the crowd to save their beloved hero's life, and many pennies were dropped into the buckets, the Emporer rubbing his hands with glee.

Kev Carroll, unlike those turncoat Lancastrian nationalists, was no muggy mushroom himself, waiting until the inevitable scuffle amongst comrades broke out, at which point he pocketed the cash without a single person noticing. So much for the warnings. There was no danger for him from his own people, after all, even his extremely estranged anti-followers.

Emporer Julius Kev Carroll was far more powerful than the whole world could ever contemplate. Forget the Bedfordshire Police Commissioner Elections. He had become a god in his own charlie-time, "the white marching powder manifestor of the whole universe".

All the time Carroll had been chuntering to the crowd, his assistant, and Guardian Of The Official Twitter Hel Gower had been ignored, overlooked, and treated like she wasn't there. This earned the sacred emperor the deserved bitch-slap for his troubles.

She too, like Emperor Carroll was a tiresome, pestering megalomaniac. Retaining control of the North was not enough. Greedy Hel Lel Gower insisted Carroll must fleece the mushrooms for all they had got. "There's only one way we can stay in the money before Tommy gets out, by doing what we the far right do best, assuming stupid stereotypes are FACT. Northerners are skinflint cunts who don't have a penny to rub between them, so we'll here in Manchester we will hold our first "Impromptu 2013 Official EDL Tat Sale".

And she was right. A half price sale on EDL branded hoodies, mankinis, and buttplugs went down a treat with the supposed dissidents, so much so, whilst they pledged their allegiance to Luton not Manchester, testing out their fascist buttplugs, while they chanted repetitively in a trance--like state "Allah Is A Paedo" over and over again, like a demented ancient mantra.

"There, Hel! Look what I'VE DONE!", rasped the Emperor, stealing all the credit and all of the money, earning him another bitch slap.

Empress Hel wasn't as thick as the average EDLer, threatening to kiss him on the lips unless he gave her some of the credit for retaining the loyalty of Manchester's sheeple.

While meaningless alcohol fighting still on all around them both, Stella cans flying left, right and centre, somebody from the Manchester Evening News pointlessly asketh forth Julius Carroll for his picture.

"Which subservient commie in the local press calls upon me?", he shouted out, pouting for the ideal EDL Leadership photo opportunity.

"Me first", roared Hel, scuffling with him to have the first photo taken.

"You've got your Special Branch ID Card, and besides you're a fuckin' minger, Gower yer stupid cow!", he screamed, as the two came to blows once again.

All of a sudden, Emporer Julius Kev Carroll felt something stirring in his pants.

"I feel a tongue shriller than all the lackey pisshead chants", he rasped, something visibly moving beneath his golden robes.

Whilst the inane chants of "Allah Is A Paedo" still roared out throughout a few square feet of the Piccadilly precinct, while one of them held forth a homemade banner with the words, reading "Beware The Kives of March", the same banner the pregnant sow had been carrying in his coke-induced dream during his limousine journey to Manchester.

As something started to emerge from the back of Emperor Carroll's robes, the inconsequential Northern EDLer feebly tried to climb on the speakers platform, and reach out to help Kev shouting "Knives of Mar....", but Kev booted the insignificant Northerner back into the crowd with absolute content before he could even finish his sentence.

The "lump" emerging from under Kevin Carroll's robes was non other than the loser himself, Joe Casuals, who upon hearing there were "reds" - i.e., Manchester United fans on the lose, went stab crazy, slashing Kevin fatally in the chest, doing ANTIFA's work for them.

Kevin Carroll dead, this was