Whenever the EDL and their fascist kind come out to play, (albeit in diminished numbers) the maggot larvae of organised racial hatred crawl out of the woodwork throughout social media, people most of the time silent about politics and such like, all of a sudden, inexplicably pop up, out of character, openly lending their support to the neo-nazi scum. 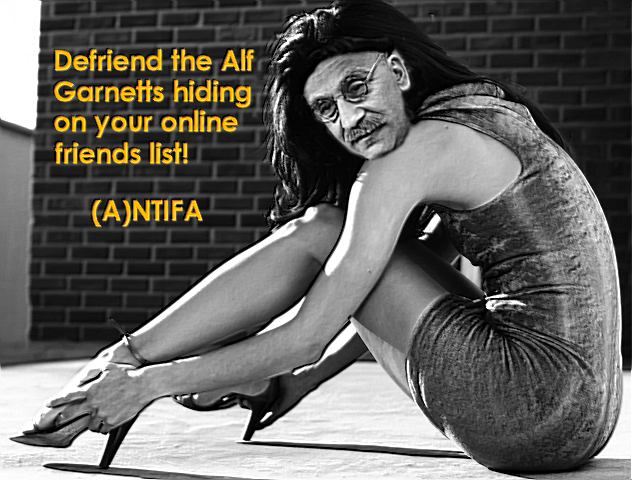 For most of us who don't hang around in the same circles as these dumbass fascist scumfucks, we can rest assured that people like them are a million miles away from us, and we are not taking just about the archetypal nut-roasting, Guardian-reading hippies that the far right love to categorise the anti-fascist movement as solely consisting of. The EDL shrinking faster than a burst balloon ever since Kocaine Kev Karroll made his infamous "Muggy Mushrooms Speech", they have coalesced down to the bare bollocks of a hardcore 14/88 skeleton, but they, as yet, have not all surrendered, no matter how downright irrelevant and hilarious they have become.

Whilst even in Daily Mail and Sun readership circles, coming out as a member of the EDL or the NWI is a kiss of death, there are some ignoramuses out there, who still think they speak for the silent majority. One of these is the loudmouth creep calling himself "Tony - Red Army", who rather than his name suggests as a supporter of the force that liberated Berlin and the concentration camps such as Auschwitz of nazi control, is actually batting for the other side politically, as a recently proclaimed follower follower of the fascist EDL besides being a Manchester United football hooligan.

@mufcsince1978 astonishing for an EDLer, and a self-proclaimed one at that, has hundreds of friends on Twitter. You'd think he was involved someway in the Man United supporters club. Maybe in all seriosity, he is. Who knows???

Announcing as the tagline on his account that he dislikes the safe family atmosphere at Old Trafford, this big, fat sourpuss of a twat surprisingly does seem to be remarkably popular amongst the online Man United faithful, knuckledragger though he is, with a good deal of followers, which is quite incredibly ironic bearing in mind that the demifuhrer of Casuals United (who has now fucked off to mainland Spain, Jeff "The Stabber" Marsh, sadistically stabbed footballing kith and kin as a hobby.

Judging by most of his recent tweets, we have nothing to believe "Red Army" had always been an avowed supporter of Stephen Yaxley Lennon et al, as from mid-2011 onwards, being an EDLer has made you a social pariah, not in a small way down to the gross stupidity and ignorance of their kind, what with the whole Muslamic Ray Guns vibe.

Anyone who is "Tony Red Army's" friend on Twitter or Facebook, once now aware he openly supports the EDL, since yesterday's pro-EDL tweets, need to take the only course of action necessary, whether or not they are head-over-heels in-love with his football craic, the hooliganism, or merely have a Valentine's Day fetish for fat guys with round faces, deathly grimaces, and beer bellies (Tony signs on the dotted line for all three!). They need to defriend the creep PURE AND FUCKIN' SIMPLE!

The same thing goes for anybody else who crawls out of anonymity to post a pro-EDL tweet or post on their public profile. Just because this loser fits the bill of the typical EDL numbnut, does not by a long chalk mean all EDLers have been tarnished by the proverbial fugly stick. Regularly snorting coke or swilling Stella will not help an EDLer become a supermodel, however when it comes to part-timers surfacing on Facebook or Twitter to big-up the EDL, some of them can look quite normal, or even, dare we say it, quite attractive, or "buff" even... Some of them even hold down ordinary jobs which don't involve dealing charlie, M-Cat or crack, shock horror!

Forget what these fairweather EDLers look like. Be they ugly or attractive on the outside, lurking just beneath their skin is a haggard, wizened Alf Garnett inner-monster frothing at the soul with ire and brimstone towards anyone foreign, darker skinned or Muslim.

Until an upcoming EDL march, they would have done their utmost to keep their true feelings about non-Aryans under wraps. Some might even be your Facebook or Twitter friends. So-called friends, we mus add, as if you are a true, committed anti-fascist, you cannot pay lip-service to Antifa, Hope Not Hate, UAF etc, whilst playing devil's advocate and still allowing such idiots to remain as friends (just to be kind to them). If you are such an enigma of indecision and inaction, you are a coward, no matter how strong or far back the friendship goes. Fuck freedom of speech (nazis would send you to the concentration camps for daring to express it). This is a serious moral course of action that defo needs to be taken against EDL scum!

We're not asking for everyone to "bully their bessies" cos they have turned into fascist monsters at the flick of a switch. Anti-fascism, as a socially-conscious movement, does not work that way. However there is a much simpler and just as effective way of dealing with a fascist threat from within friend circles.....

From now onwards, EDL supporters who have slept quietly on your Facebook or Twitter friends list until now, but spontaneously come out in the open to post supportive posts or tweets because of a deficiency in the grey matter department (they would have been better to keep schtum), should be swiftly and effectively removed from friends lists and forthwith blocked, treated as the pariahs they deserve to be.

Those friends of yours who, until now, kept under wraps the truth about where their true allegiances lied, and kept their racial superiority desires hidden, must be firstly made aware that they are complete and utter bell-ends, and secondly, they must be promptly and vigorously publically defriended, in so doing, letting others friends and acquaintances of the person know the score, so the Tommy Robbo fan will lose both immediate popularity and street cred.

We're not saying you have to delete them in an instant - yes, allow them the opportunity to explain their selves. Perhaps they are suffering from mental health issues, or have been indoctrinated by a racist family with thoughts of hatred towards their fellow member of mankind. Maybe, just maybe, when questioned and put on the spot, some of them could take return to their senses, denounce organised racism and fascism, tell Kevin Carroll to stick his muggy mushrooms where the sun does not shine, remaining close or occasional friends to you.

Which is fine and admirable of you - bearing in mind some racists DO change their minds - some ex-EDLers have even repented for their dark ways by joining Anfita and becoming anarchist punks, hating nobody but the fash and the powers that be - all power to them.

Those however who refuse to see the error of the ways, being rude and aggressive, calling you pinko commies etc., calling you all the possible names under the sun, whilst keeping with the sullied and soiled programme of racism, deserve point blank to be ostracised. In this situation, send the EDL former friends to fucking "Coventry", the losers.

When it comes to fighting racism, like the old hip hop pioneers such as KRSOne and EPMD used to say, "There Ain't No Half Steppin'!" This cannot be more true, than when you grow a set of balls and let your wayward friends know the vast philosophical gulf that stands between you and them.

Things just cannot be the same when Shaz, Tony or whoever starts bigging up the EDL right before your eyes, talking crap on their status like: - "Good luck EDL. We love you!", or: -"We salute you EDL boys - do us proud in Manchester!"

You cannot claim to actively oppose fascism whilst turning a cowardly blind eye and lending friendship and support to part-time racist bastards on social media, without being quite rightly called a hypocrite. Sometimes in life you just need to stand up and tell it how it is, not pussyfooting or beating around the bloody bush!

If and when you come across any of your friends on chummy terms with the fash, do the right thing, guys, tell them to sling their fuckin' hooks, unless they see the immediate error in their ways.

Looking back to before the Second World War , there were plenty of people during Hitler's reign, especially amongst the working classes who objected to the racial stereotyping and the persecution of minority groups such as Jews, Roma, LGBT and disabled people, but sadly many did not have the guts to take on the people close to them who openly admired Hitler. If enough people had said, "no mate, you are well and truly out of order with your hatred", history might have turned out so much different!

Sympathy should not come into it. You cannot still be friends with a lad or lass just cos you went to school with them, hung out on the football terraces, or cos they are engaged or married to a family member. Unless they are taught a public (but peaceful) lesson, they won't learn that nazi groups like the EDL or NWI are complete and utter filth, and must be actively resisted with the same indefatigable vigour that Winston Churchill fought the EDL's predecessors all those years ago, on the beaches. Just as Malcolm X did, fighting the Klan, and Martin Luther King did united the masses behind freedom and equality, you too must take a stand and defriend the fascists on your online strata of friends, the moment you become aware of their toxic pro-fascist stance.

The spirit of Malcolm and Martin lives on. No Pasaran, Anarchist and Socialist Brothers and Sisters.

Peace and Respect To All Anti-Nazis!!!