The EDL got absolutely nothing from today's visit to Manchester, leaving its braindead devotees so absolutely bored shitless, afterwards came a mad dash to jump naked into the canal at Canal Street (possibly wandering where the EDL's Gay Division had vanised to). After the usual run-of-the-mill speeches, anti-fascists will be pleased to know nothing has changed, Tommy, Kev and Hel still in-charge of the EDL, and not the French Revolution-like leadership change that many members had prayed incessantly to Nutzi Norse God "Odin" for. 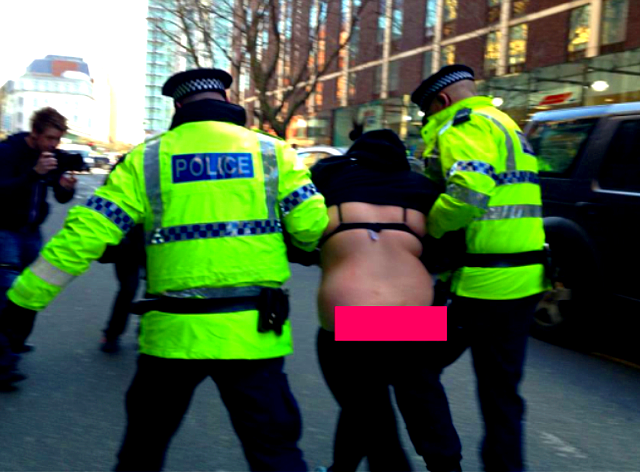 Muggy Mushrooms came from far and wide to Manchester believing this was a brand new dawn (or "Golden Dawn" even) for the beleagured EDL, the moment when the rebellious Northern racist fuckwits would stop paying lipserve to the Islam-obcessed leadership, and would take over the EDL and shape them into a flat cap, balm cake and whippet version of the Forth Reich.

Out would go the slavish devotion to Israel, and the fake pretence that the EDL were not homophobic, and in would come, what many EDL refuseniks on Twitter called "real patriotism without the political correctness".

On this particular pretence, many former members were in attendance in a crowd of no more than 450 fascists, including many ardent Hitler worshippers giving the EDL-branded Fash one last try.

So what exactly happened behind the Albert Square Pig Pen? Was English Patriot History changed forevermore? Was this the new Neuremberg? Was there a French-revoution counter-rev style with Tommy, Uncle KKKev and Hel Gower's heads lopped off with a makeshift guilotine erected Blue Peter-style from Stella Cans, silver foil and a "broken bottle blade" while chanting joyously Let Them Snort Coke!"

Was there 'eck! Absolutely nowt happened.

The Official EDL Leadership are claiming the event was a rip-roaring fandango of a street fascist success, hyperinflating attendance numbers to an fantasmagogoistic humongous 1500 attendees, but when the real maths are done with an electronic calculator, and they realise that they indeed cannot add up (or spell), they will still claim the march was an astounding success.

Unite The Right was a catchphrase invented to ensnare all EDL dissidents and former members into believing there would be a major change of leadership, where in-fact there was no net change after all of the postulating and posturing on Twitter and Facebook.

The speeches were all contrived. Normal service was successfully maintained by the EDL Leadership with Tommy, Hel and Kev safely in charge before and after the rally.

So it was indeed truthfully a success for the unloved EDL Leadership. The mugs who turned up longing for leadership change were so blasted neutron-style out of their stupid little brains, they stood like sheeple, chanting aimlessly "Allah Is A Paedo" in the cool March sunshine, without realising they had all been taken for a big, shiny, bells, knobs and buzzers ride.

Someone else who was taken for a ride (in personal police transit no less), was the clueless EDL angel who allowed her halo to slip, believing she was destined for a career in nude modelling if she lowered her jeans before PC Plod.

Sadly the reporter who took the full-frontal photo was in complete and absolute shock afterwards, and had to be resussitated (another thuggish EDL casualty), so reports she had diddled over herself in an incontinent burst of false patriotism, remain uncomfirmed.

The Overseer On The Ground