In the early hours of Saturday morning, a group of people committed to protecting the environment from extreme energy extraction set up camp on Duttons Lane, Upton, near Chester in the field where Dart Energy plans to test drill for coal bed methane. The original planning permission for test drilling expired last year, but Dart took steps to renew it and looks set to attempt test drilling here. Our job is to stop them. For more on the growing resistance to Dart Energy's activities in the Welsh and English Marches, Nottingham, Falkirk... see these previous articles [ 1 | 2 | 3 ].

Solidarity, support and supplies needed. The Camp is about halfway along Duttons Lane, Upton, a turning off the A41, and the council seems to have just erected a new street sign to help you find it. Postcode is CH2 2PE. 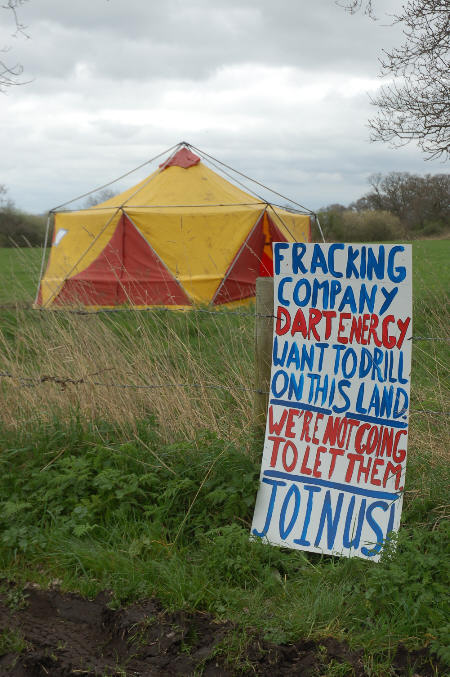 An invitation to join the Upton camp 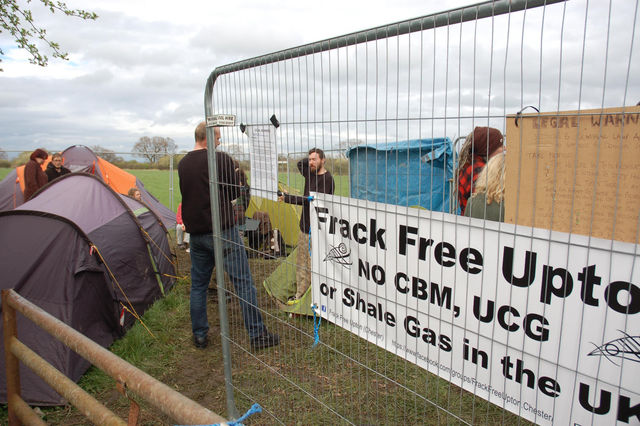 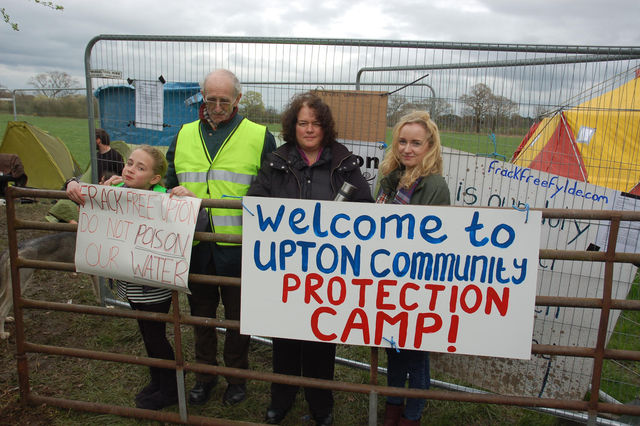 local support for the camp 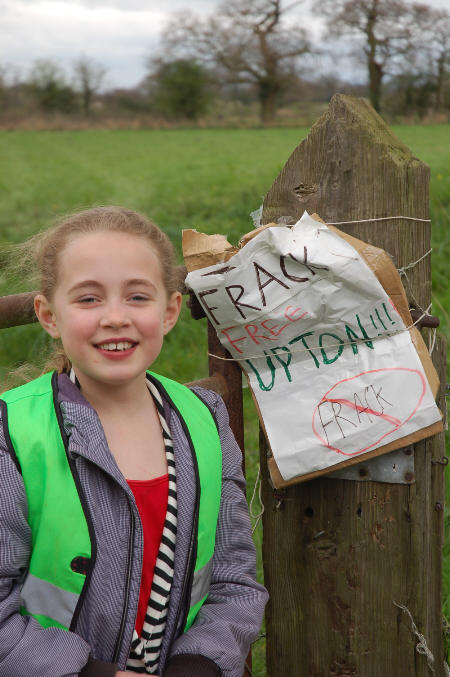 This sign has been up a couple of weeks (pictured with the signwriter!) 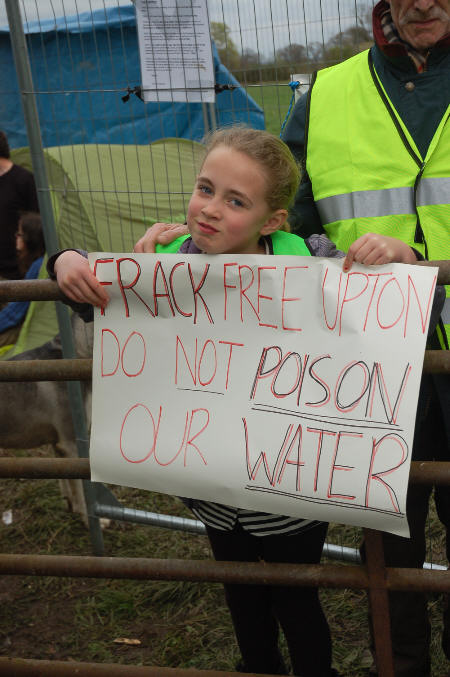 a message to dart energy 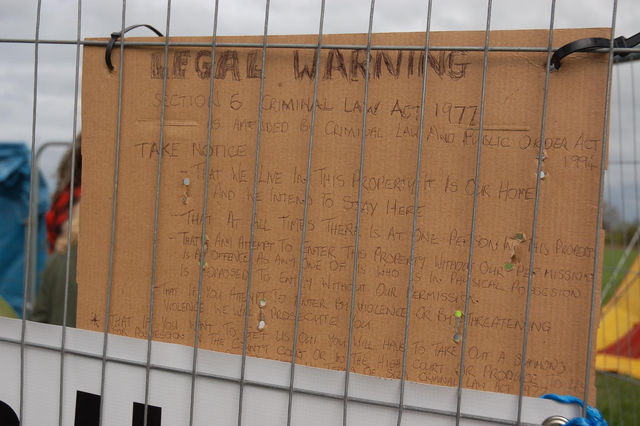 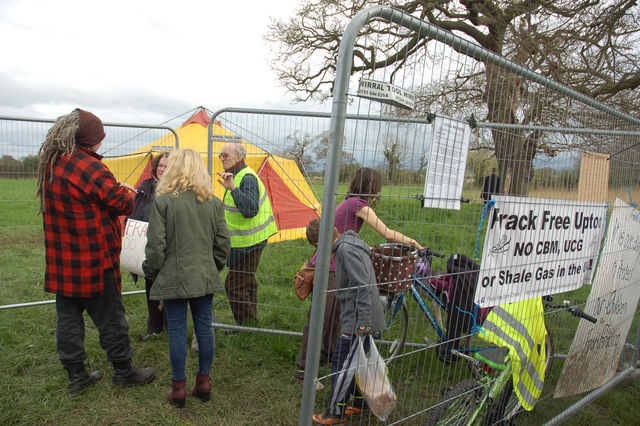 looking towards the proposed site entrance (behind tree) 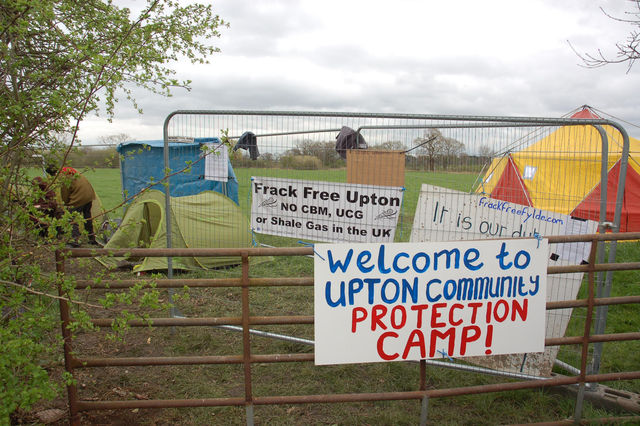 A film and new anti-fracking group in Oswestry; new group in Wrexham

Dart Energy is also trying to establish operations in Shropshire with a test drilling application in progress for Dudleston near Ellesmere and last Thursday night I was in Oswestry with a few other Wrexham folk and for the screening of Josh Fox's film about fracking, Gasland (there's now also a sequel, Gasland II). I'd seen the film before but it was just as horrifying second time round. Coal bed methane extraction may or may not include fracking but it's just as damaging - see the ABC Four Corners film Gas Leak to learn about the Australian experience with coal bed methane (usually called coal seam gas there). There's also a possibility of further drilling down beyond the coal seam to the shale layer. The post-film discussion led to an embryonic group being formed in Oswestry to resist Dart's plans for gas extraction in the area. Its first event will be a talk by Frack-Off later in April.

Meanwhile, in Wrexham, where the council has just thrown out a planning application by Dart Energy to test drill for coal bed methane at Borras, there was a meeting Friday night that agreed to set up a Frack Free Wrexham group and to organise a community event to bring people together and raise awareness.

A protection camp in Chester

On Saturday, I woke up to the encouraging news that a group of people had been up all night securing the Upton site and setting up camp there so I headed over in the afternoon to see how they were getting on. With a number of veteran protectors from Barton Moss and other camps, local campaigners and visiting residents from the immediate area, the space was already looking pretty organised with Harris fencing around the camping area, the geodome up, plenty of sawing and hammering going on and a press release under construction. Probably as a result of the dedicated work of the people who've been raising awareness of Dart's plans in the vicinity these past weeks, including holding a number of public meetings, the locals I chatted to at the site were well clued up, supportive and appreciative of the presence on the site, particularly since the camp has got there before Dart's had a chance to start work. The next few days are likely to be crucial, so please get there and support if you can.

This will no doubt change, but as of yesterday evening (Sat 5 April), the wish list read as follows:

Or just pop along to say hello, bring a smile.
See you there.

Come on down to the camp and meet the campers and each other!

All welcome, Tea and Cake aplenty.

Drawing, colouring and sign making in the kids tent.