Newsflash: Labour Doesn’t Care About You

It turns out the Left can move people – just not very far or in very interesting directions.

Seeing as how these things are usually rained out or freezing, The People’s Assembly at least managed to pick a nice enough day for their “No More Austerity: Demand the Alternative” march on Saturday (June 21st).

It’s a shame they couldn’t also have picked a more inspiring message – begging the government to stop the public service cuts they’re ideologically committed to and demanding a new Labour government as the only ‘alternative’ they can imagine. Hardly an Earth shatteringly radical call to arms for the poor and oppressed. But they do have Russell Brand, so that’s something. 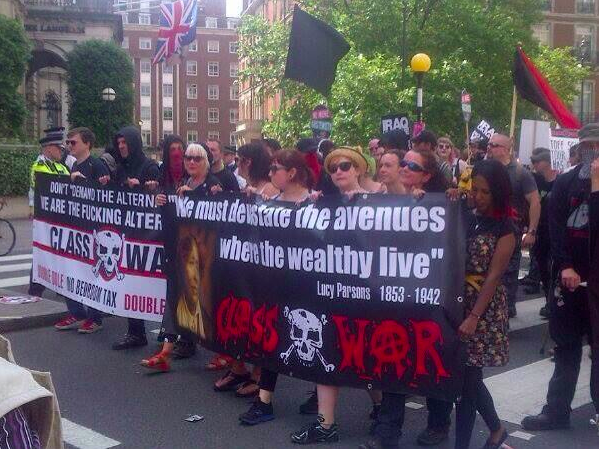 The march itself was decent enough standard lefty fare. Trade Unions, campaign groups and of course every flavour of Trot you could want to avoid turned out to fill the streets. Numbers for these kinds of thing are usually hard to come by, but the organisers are sticking with a (generous) estimate of 50,000. Of all the blocs that gathered to fill out Portland Place, the prize for most entertaining had to go the Class War crowd. Who else would have banners with ‘We Are The Fucking Alternative’, quotes from Lucy Parsons and ‘Fuck Off Back to Oxford’ next to Owen Jones’ massive face? These, coupled with rousing speeches and the shocked looks of passing Ascot goers trying to reach the station put the assembled Anarchos in high spirits and attracted plenty of attention to them. So much attention in fact, that a squad of Police Liaison Officers- including two from Wales preparing for the expected NATO protests – spent their whole day shadowing them and being called bastards.

The truth is, Labour isn’t failing to make moves against cuts and austerity measures because they haven’t been asked yet, they’re failing to do it because they don’t want to. It’s not in their interest to make sure the rest of us are doing all right if it means damaging the profit margins of the elite who make up their leadership and donors. The Labour party are every bit as capitalist as the Tories, and just because they’re less shameless about it doesn’t mean they’re going to provide any salvation. A party who once ignored a million people taking to the streets against war in Iraq clearly don’t care about we say at all, and probably couldn’t give less of a shit what a few thousand marginal lefties want to see on their manifesto.

With a link to the full Article 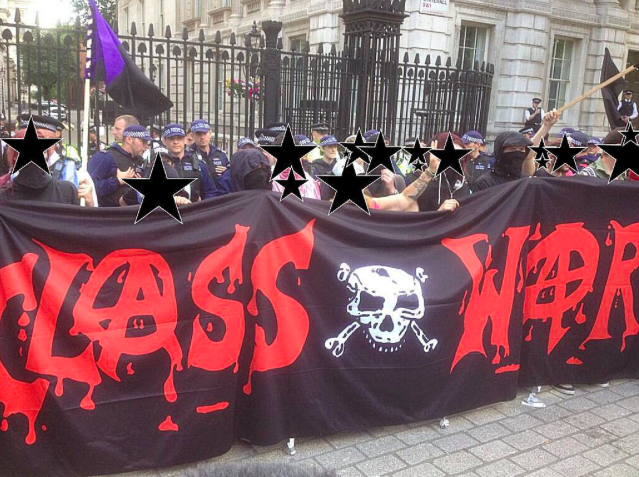 The complete article has analysis, history and some understanding of what the working class are going through at the moment. That's more than can be said for most of the shit that is now presented as a radical or anarchist analysis of anything in the UK. No doubt it will be left on the open newswire, not the 'promoted newswire' were the 'wadicals' live out their self-righteous middle class fantasies.

Some more of the Article here:

The stroll down to Parliament was pretty uneventful, save for the delightful occurrence of Rape-Apologist-in-Chief Alex Callinicos absent-mindedly wandering into the Class War bloc and another of his rape apologist minions receiving a forceful ‘wanker!’ from a Sectarian Individual. When the march arrived at Parliament Square, melting from the sun and half drowned in obscure lefty publications and 9/11 conspiracy flyers, the real tedium began. Speaker after speaker up on the stage ran through the regular left wing rally script – rehashing stories of strikes gone by, congratulating us on such a great turnout, blaming all evil on the Tories, forgetting to mention capitalism and of course reminding us that to end austerity we all need to vote Labour. The call to get Labour back in power usually seems pretty weak, based on their track record, but it seemed even more redundant coming in the same week that Labour announced plans to slash benefits for those under 25 years old, and not long after they admitted they wouldn’t reverse cuts that have already been made. Which would suggest to anyone listening that Labour don’t see combating austerity as a high priority.

Among all this liberal posturing, there was one call for revolution from the stage. Famous sexist and haircut Russell Brand called for a “peaceful, effortless, joyful revolution”, which sounds a lot like doing not very much. When the most radical demand coming from a left wing platform is to take part in something ‘effortless’, it’s high time to admit that the movement is toothless. The organisers and their supporters have clearly been a bit miffed by the lack of coverage for the demo on the BBC – they’ve been moaning about it all over Facebook at least. But when you consider that this was a simple, uneventful A to B march and rally affair with the only real message seeming to be ‘ask the Labour party to be nice, then vote for them either way’, it’s not really surprising that media interest was low. People are pissed off at the crappy economic situation? Hardly news. 50,000 people on a protest? Come back when its double that and maybe someone will care. If the left wants to grab headlines, they’ll have to finally admit that new tactics and far more interesting demands are needed. The media doesn’t care and the Labour party doesn’t either.