UKIP's most popular and prolific tweeter David Jones, who is regularly retweeted by all the UKIP hierarchy including their two MPS and their MEPs, has twelve and a half thousand followers which makes him the most popular member of UKIP on social media. His twitter account is peppered with calls for Islam to be banned and tweets calling for Muslims to be expelled from Britain, but Muslims are not Mr Jones's only pet (race) hate.

He also loathes black people with a vengeance also, and wishes Britain was wholly white (read on). 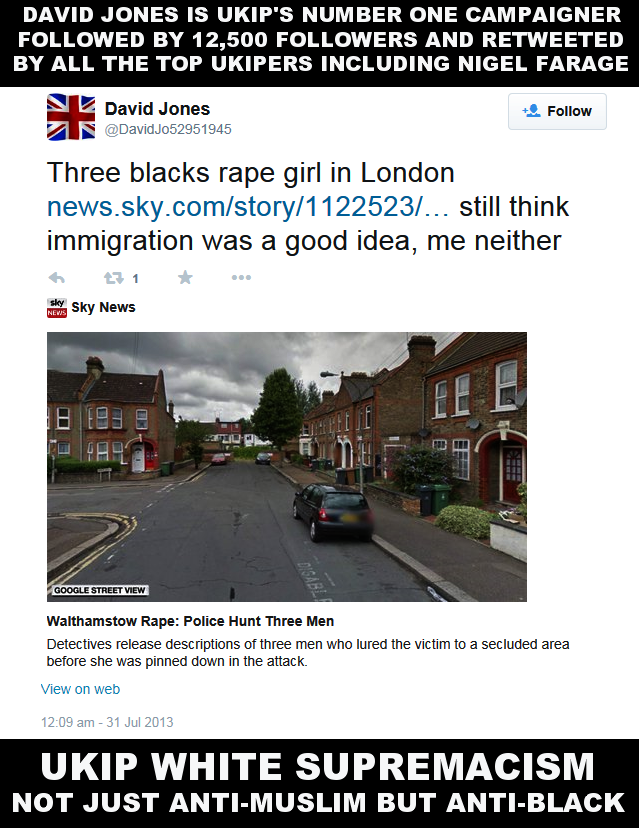 The following tweet makes racist reference to the skin colour of alleged rapists, his words bemoaning the fact that black people were ever allowed to immigrate to Britain: -


His vile anti-black racist words, "Three blacks rape girl in london. Still think immigration was a good idea..... me neither".......


Feel free to make your own screenshots of the tweet, just in-case it is deleted under orders of Nigel Farage and chums, who are trying to "whitewash" the party before the forthcoming general election.


The tweet is identical to the kind of vile white supremacist tweets posted by Nick griffin in the last five years.


Anybody who is black, and is thinking of lending their vote to UKIP as a protest vote, think again.


Reviving claims that Farage repeatedly used the n-word when referring to black voters, Sked described: "He wanted ex-National Front candidates to run and I said, 'I'm not sure about that,' and he said, 'There's no need to worry about the nigger vote. The nig-nogs will never vote for us.'"


Please read this article from 1999, when Farage has been confronted with a photo of himself meeting BNP bomber Tony LeComber, which also makes reference to the fact that UKIP meetings had always been accompanied by the words "n*gger" and "n*gnogs).


At the party's conference two years ago, al journalists were ejected from the room whilst UKIP discussed Muslims and Islam, ensuring that any neo-nazi sentiments were firmly kept behind closed doors.


Nigel Farage mdoelling himself on Putin, if UKIP succeed in gaining the slightest whiff of permanent electoral power at the forthcoming election, all minotities will suffer fascist oppression.