The Yorkshire Division of the EDL, who now retweet neo-nazi NWI posts on their facebook pages, are claiming to have struck a friendship with local anti-child abuse campaigners in Halifax, West Yorkshire. A registered charity who campaign against child abuse from all ethnic backgrounds, the Children's Society have been unwittingly been linked to the EDL's racialisation of crime. 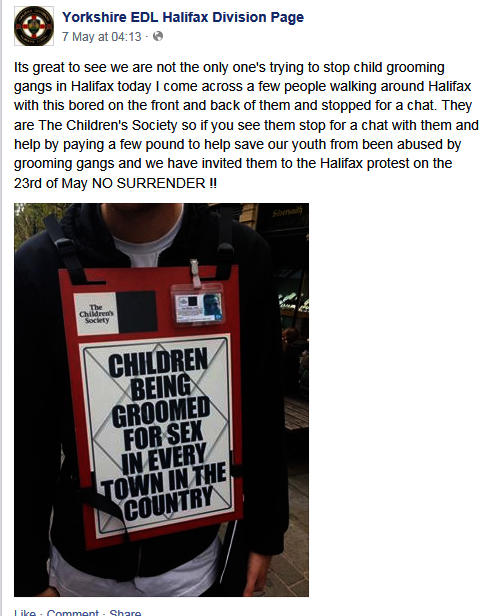 Spotted on the Halifax branch of the Yorkshire EDL (a page now littered with posts from their openly neo-nazi "North West Infidels" (NWI) counterparts, the EDL boasted that during a recent visit to Halifax, they befriended local West Yorkshire workers with the charity and they invited them to attend their forthcoming fascist march of hatred through Halifax Town Centre on Saturday the 23rd of May 2015.

The Children's Society are known for doing an excellent job at helping society protect itself from child exploitation. The sandwich board which was pictured by the Yorkshire EDL fascists, warned of child abuse in every town in the United Kingdom, including all-white towns and villages, a point readily overlooked by this vile drunken fascist hooligan gang.

Any attempt to draw a highly respected children's charity into supporting a far right political group and their abhorrent policies of racist hatred, must be vigorously opposed.