Taking their inspiration from the lynch mobs of the Mississippi Delta, the rednecked lager swilling former football hooligans of the "South Yorkshire Casuals" emerged as Yorkshire's answer to the KKK, marching against a rape suspect just because he was reported as having a brown skin and a "big nose"....... The pre-march event post claimed "immigrants were out to destroy Barnsley". 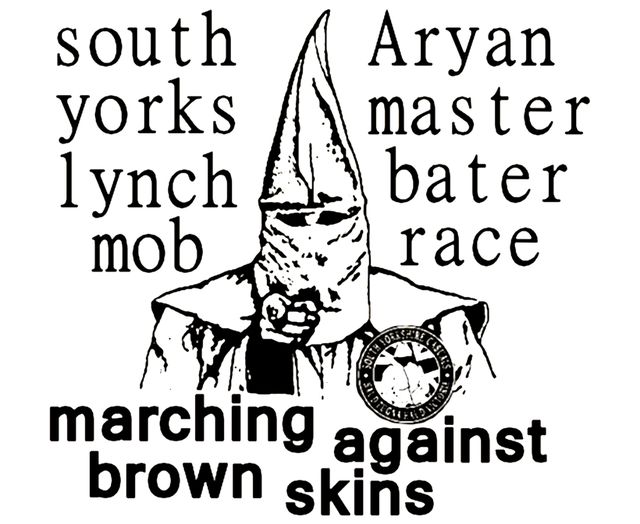 Leaving their burning crosses in the pub car park after downing too much Stella and cocaine, the proud Aryan army marched through the streets of Barnsley frightening pensioners out shopping with their thuggish white supremacist chanting, ending up with self-proclaimed demi-Fuhrer of the SYCKKK Dale Kelk ranting manically about dark-skinned immigrants.

Dale Kelk, was awarded the "Freedom of the Sheffield Star", and responded by spouting far right propaganda - claiming he was not marching against one particular race - just people with skins which are not as pure white as the driven snow.

https://www.facebook.com/BarnsleyCommunityWatch
(showing off his chest)

On the Barnsley Community Watch page, Kelk absurdly claims he earned a special commendation for the march...... He was marching for the (white) people of Barnsley....... 5 words / 14 words, and so on......