Horrific young fascist, and budding nightclub DJ, EDL supporter Ryann Bateman, a from North Wales, has had a racist hissy fit since learning their are hardworking British Asian staff keeping hospitals, health clinics, emergency ambulances and other sectors of the NHS staffed 24/7, blaming David Cameron for employing them. He links lifesaving health workers with brown skins to the murderers of ISIS. 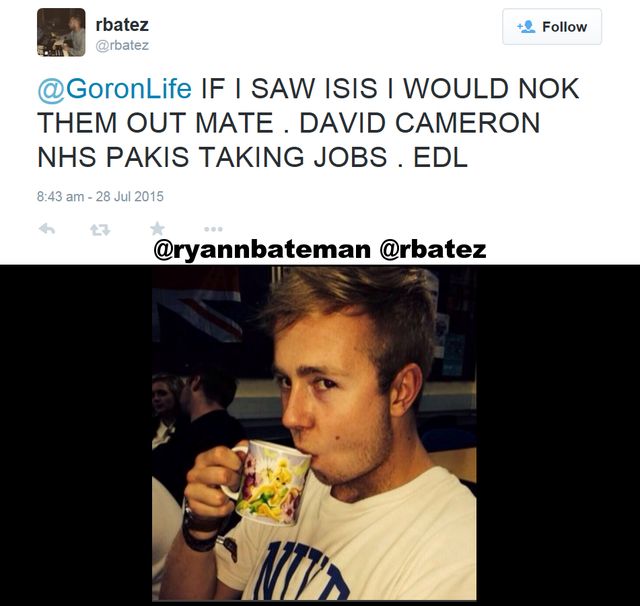 In a typically unintelligible EDLer rant, Ryan Bateman of North Wales, a vile fascist Twitter troll (@rbatez and @ryannbateman) has launched a broadside at David Cameron, furious that the NHS dares to employ staff with brown skins who he assumes to be extremist Muslims under the pay of ISIS.

Besides being a Welshman following the English (so-called) Defence League, Ryan is a budding DJ, and his twitter profile shows him at the decks in a club in North Wales. Let's hope he does not ever faint at the decks, or drink too much alcohol and end up in the local hospital.

All the non-white doctors looking on him, trying to assist, will freak the poor little fascist cretin out.

RETWEET AT YOUR LEISURE!