Football hooligans a long since dead species in the EDL, numbers declining with every goosestep, the few remaining formidable fascists calling it a day to go and join the National Front, the battle weary so-called "English Defence League" has become the last vestige for the emotionally desperate. 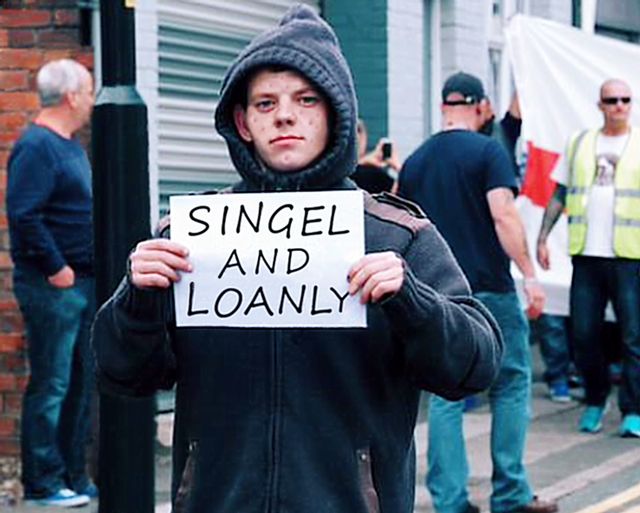 Drummer Lee Rigby's memory exploited to the grave, what was once a sizeable army of jackboots and Stone Island jackets has rapidly rotted away into the black mould of social inadequacy and rudderless numptyism that leaves little to the imagination. In Halifax, whilst supposedly protesting against nonces, several members exposed themselves to passers-by, which says it all. Once "marching down the street", now slithering down the drain - to nothingness......

Moronic misfits who lack the social skills to charm the opposite sex, and the brainpower to see how totally and utterly pointless the EDL has become, wasting their pennies on the same old speeches, the same old fisticuffs with Dave Bolton, the same old arrests, and the same old lack of emotional fulfilment, the life of the embattled lingering footsoldier is "virgin" on the ridiculous. Dreaming of a bevvy of EDL Angels primed to pop sad and lonely male nationalist cherries to oblivion, all the date-weary hangers-on discovered was a scattering of sour-faced middle-aged men with seven-month pregnant beer bellies.

The future of the Aryan master race is long gone.