With their Hitler-loving brethren taking a pasting in Liverpool last Saturday, it is the turn of Britain's long-time established ageing neo-nazi group the National Front to goosestep around a multicultural city centre, praising their late fuhrer idol Adolf Hitler. Let everybody know who was involved in the astounding effort against the nazi cowards in Liverpool that Manchester needs similar resistance to the Holocaust-denying organisation. 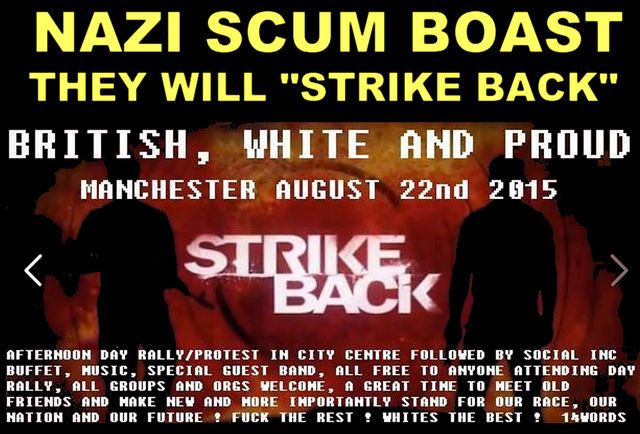 Having kept this relatively quiet for the past few weeks, hoping to slip under the antifascist radar, the dinosaurs of the National Front will be hoping for better luck in Manchester. Watmough and chums will be there, as will Diddyboy and his loser mates from the NWI, not forgetting the peculiar nationalist badge-pedlar who is Eddie Stampton, who will be joining the NF in their attempted "Manchester takeover" this Saturday.

This will be followed by an NF social in a shit-hole hostelry in Oldham where fat, toothless racist geriatrics will attempt some karaoke.

Let's extend the warm Liverpool welcome to the NF in Manchester. Concerned locals, polish antifascists, Irish republicans in MCR have taught the neo-nazi fuckers a good lesson or two in the past to sink their bombast. Together, North-West England will ensure this fine Mancunian spirit of antifascism prevails once more.