Every case of a paedophile gang abusing children, when the abusers have brown skins and Muslim-sounding names, has been targeted by drunken, racially abusive fascist groups such as the EDL and Britain First, without fail, all across the UK. However, when a Bristol-based gang of white Anglo-Saxon paedos sexually abused babies and filmed their horrific beyond words abuse on the internet, far right groups such as the EDL have refused to blink an eyelid. 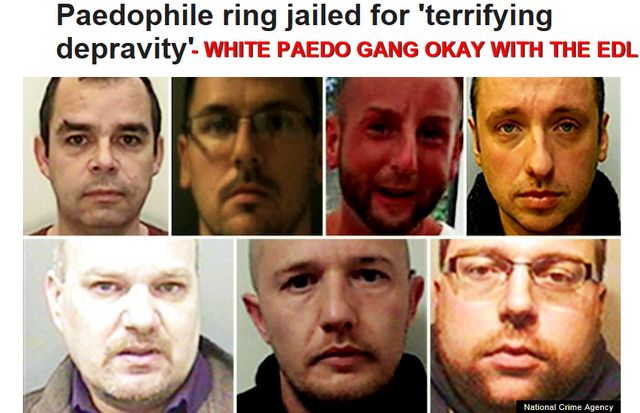 The EDL and similar fascist thugs pretend they are "protesting about paedophilia" by gathering in a Wetherspoons pub and getting bladdered, rallying against only those paedos (practicing or non-practising) suspected of being brown skinned and Muslim. Their get out clause when the nonces are non-practising and use alcohol (forbidden under Islam) as "cultural Islam". But whenever nonces have Christian names, surprisingly their abuse is not called "cultural Christianity", a conclusion when applied to white Anglo-Saxon offenders no more tenuous, given Western culture was founded by Christianity.

Let's get it clear. Fascists do not give a shit about the victims of paedophilia - their ranks teeming to the brim with kiddy fiddlers of all persuasions. White kiddie fiddlers just like this horrific gang of evil sex offenders, who, just like the Rotherham offenders drugged their victims.....

"In the worst nightmare, from the very deepest recesses of the mind, at the darkest hour of the night, few can have imagined the terrifying depravity which you men admit" - Judge Julian Lambert.