If you have ever wondered whether the Daily Express opinion scripters were, and what their actual views are - We have discovered the twitter account of one of their journos who writes their xenophobic pro-UKIP opinion columns, professional Manchester racist journalist "Christian Black" who sickeningly mocks the victims of racial hatred, and posts openly racist remarks about President Obama. Such are the vile opinions of this particular Daily Express staff member. 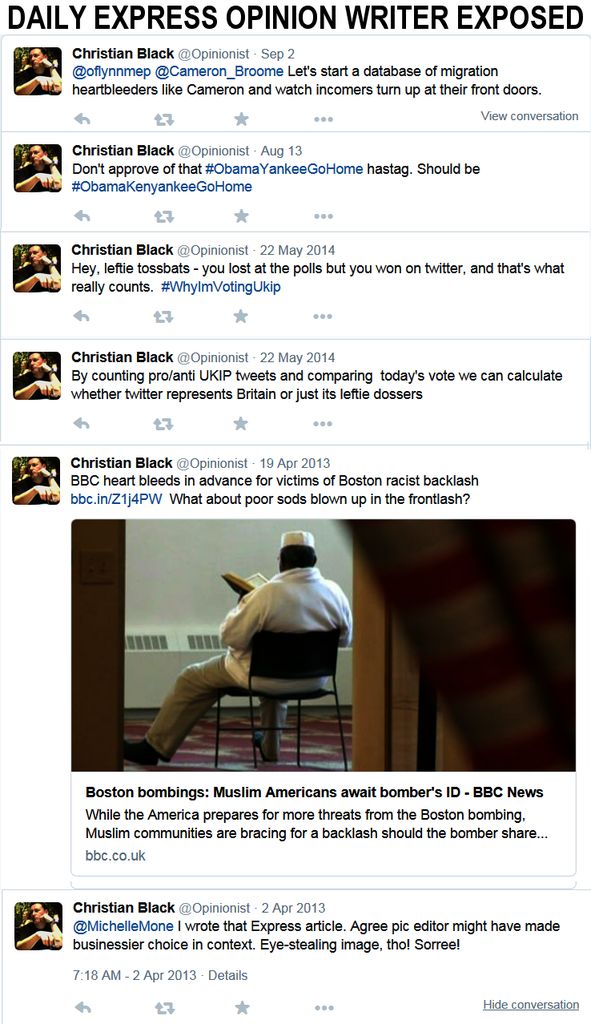 There has been a belief held by many that the editors of the Daily Express editors didn't necessarily share the views of the management, and were not necessarily racist, or supported UKIP but simply knew where their bread was buttered, and pimped hate for cash.

Reading interactions with antiracist journalist Fleet Street Fox, we happened to stumble across the personal Twitter account of one of the Daily Express's bile-filled opinion column writers, Christian Black, who also writes lifestyle pieces for the extreme rightwing tabloid.

Using his Twitter account, Mr Black tweets vile anti-immigration tweets openly mocking the victims of racist backlashes, and does what no self-respecting British "Fleet Street" journalist should do, making disparaging racist remarks about President Obama, calling for "the Kenyan to go home". Obama's press office TAKE NOTE the next time the extreme rightwing haters in the Daily Der Sturmer come knocking for an interview: -

Of course, being an avid UKIPer, Christian Black also sneers unprofessionally at "lefties"-

Shame on Richard Desmond for turning the Express into a far right newspaper. He most definitely should know better.....