SHAME ON YOU: Traitorous drinking establishments in Preston who pretend to be patriotic, knowingly allowed hardcore neo-nazis to gather and drink there, including the 55 club which has a track record of allowing the BNP and other white supremacists to gather there. They openly waved Waffen SS flags, the unit responsible for rounding up Jews and murdering Jews, Poles and Roma people throughout Central Europe in the former Soviet Union. SHAME ON YOU! 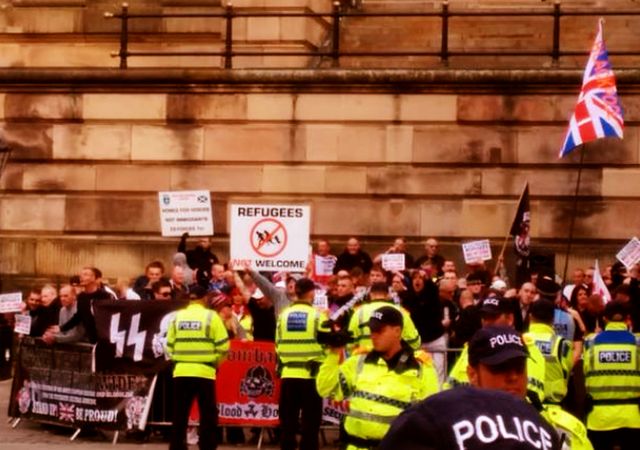 Allowing the drunken, moronic fascists of the EDL to drink in your establishment is one thing. Inviting Combat18 and Waffen SS supporters to be served at your premises is totally and utterly unforgiveable. The Waffen SS participated in the Holocaust, for Christ's sake - how could you welcome them in with open arms????

Ask yourself this, the management of the Bull and Royal and the 55 Club.

Brave British combatants in World War II were murdered by the Waffen ss including 97 British prisoners of war at the Warmhoudt massacre. Read all about it on Wikipedia, if you don't know your history, you false patriots.....

The Wormhoudt massacre (or Wormhout massacre) was the mass murder of 80 British and French POWs by Waffen-SS soldiers from the 1st SS Division. Anyone allowing neo-nazis who admire the SS are not just spitting in the face of humanity, but are traitors to Britain!

Preston Against The Nazis!