Ten years ago, with a string of council election victories, the BNP were pretending they were a bona fide political party, and had left street fascist violence behind. However, all their seats gone, in 2015, they have returned to their boots and fists. Before today's neo-nazi march took place in Preston, a march that saw fireworks and marbles thrown at passers-by, BNP Nottingham's Official Twitter feed called for the NWI and the NF to "kick the reds", encouraging and inciting the disgusting acts of violence that occured. 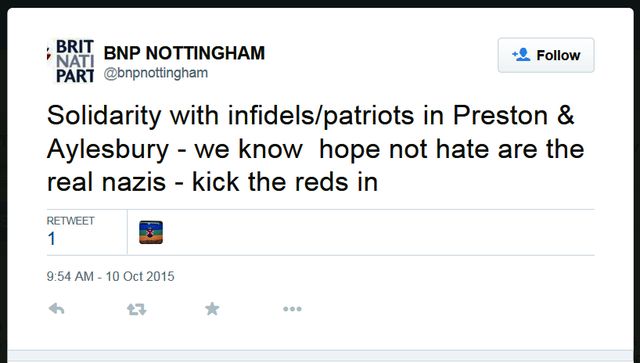 As the tweet demonstrates, all veneer of respectability has long-since gone out of the window, in regards to the BNP.

A registered UK political party encouraging political violence towards political opponents against the law, and also should be considered by the Electoral Commission as a breach of regulations.

The BNP should thus be officially struck off as a political party.