After years of Muslamic Ray Guns and "What's That Symbol" ranting, the feckless little "footsoldiers" of the EDL admit what we knew all along - they are seriously lacking in grey matter. There's dumb. There's dumber. Then there's EDL. Radicalised by Pam Geller and friends, and brainwashed with cheap, tasteless lager and adulterated coke, it is now openly acknowledged that nationalistic intellects turned to Jelly. Even Spiked Magazine (AKA "Living Marxism" now Libetarian Capitalism), who inanely insited nobody must laugh at the EDL, have now fallen stonily silent. EDLers have always been, and still are, the idiots of the Global Village, backwards, racist, misogenistic caveman opting out of the advancing multicultural civilisation which makes their ugly views irrelevant. 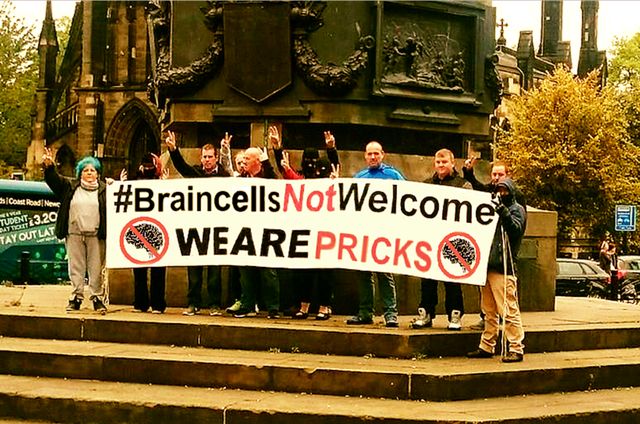 With grasses, double-dealers, violent criminals, rapists and paedophiles galore, failed feckless football hooligans jumped at the chance of being in Garry Glitter's gang, so they could chant 'Allah Is A Paedo', whilst turning a blind eye to all their white nonce colleagues. In thirty years, according to Geller and her programmed EDL minions, there will not be any white people left in Britain. Nor Christians, if you believe (and donate money to) the Ministry of Paul Golding. The Doomsday scenario lapped up unquestioned by lame EDL minds is testament of the inane stupidity of British street fascists and their UKIP comrades, but by openly stating that white civilisation is dying out, socially-inept EDL morons are excusing their failure to procreate, let alone lose their virginity. Shunned by even their beloved EDL Angels, instead of polishing up their chat-up lines and knowledge of the world, EDLers blame their terminal failure to procreate on Muslims, lesbians, people with melanin in their skins, and refugees, overlooking the fact they are charmless, fat, unappealing nobodies.

Pamela Geller is their collective missing braincell, the shouty American Islamophobe who single-handedly helped reinvigorate the neo-nazi right. Whilst namesake Uri (Gellar) bent spoons, she manipulated weak and vulnerable minds with illogical paranoia and hatred. Before Nicholas Griffin and friends leap in, jackboots failing, saying "I told you so. It's the Mindbenders", just because Geller is from a Jewish background, doesn't mean she "controls the media". The only thing she inspires are violent racist street thugs, and mass murderers of Children i.e., Anders Breivik, who attended several EDL marches including Bradford.

Blood and Honour logos and SS flags the lasting legacy of the EDL, as ardent footsoldiers filter away to groups like the National Front, she should be given a rapturous reception on Stormfront. Cosying up to Rapture-toting Christian fundamentalists who support Israel only because they believe a second coming of Christ will eventually slaughter all Jews, though Jewish by birth, her championing of extreme rightwing political discourse, has put a large number of European fellow faith citizens at risk of harm from neo-nazi violence. She is an even greater liability to her faith community than Richard Desmond. Now that's saying a lot. The CST find her views absolutely abhorrent, and even Ambrosine Chitrit (or "shit-rit" as she likes to demean herself on Twitter), doesn't send her birthday cards anymore.

Unless Donald Trump wins the presidency, and installs an immediate Reich, Pam Geller will be known for little else than helping give birth to a dwindling gang of personality-lacking psychopathic fascist morons who have never had a life. NO PASARAN!