Preparing for a violent visit to Bradford, the EDL's drunken North East division scuffle with the police, assaulting an offduty officer, preparing for facsist violence at their forthcoming Bradford demo. The NE EDL are helping organise their visit to Bradford, and ANTIFA need to keep a firm eye on the violent criminal presence of Ronald Wood and Alan Spence, as they showed up on Saturday afternoon in Newcastle itching for a fight. The police cannot be relied upon to be everywhere at once, and last time they failed to stop the fash from going on walkabout after their protest. No doubt they will escape the cordon once more when their despicable anti-refugee / anti-Muslim protest has ended. 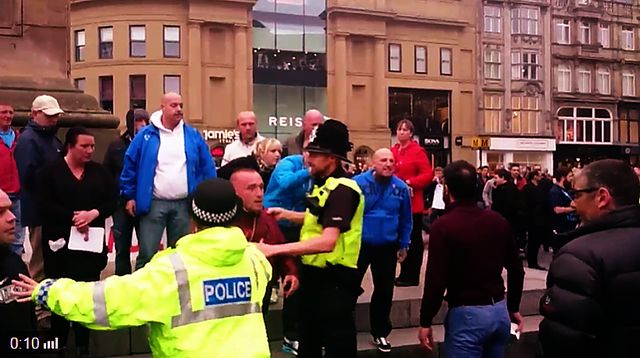 If the police lines are down once the demo has ended, and the EDL manage to intimidate shoppers in Bradford City Centre, and get into the main shopping areas, towards Sunbridge Road, Westfield, or like last time, intimidate cinema goers and ten pin bowlers at the Leisure Exchange at the top end of town, next to the Interchange, roving antifacsists need to be ready to chase the fascists away.

When their penned-in "static march" has ended, is when they are at their most dangerous. Instead of quietly waiting for their trains back to the places they came from, some of the more violent, pissed-up, coked-up morons will try and get a piece of the action afterwards.

For some inexplicable reason, the last time the fash visited Bradford, the police were caught off-guard post-demo, many coppers left suddenly, and this allowed the nazis to leak out of the Interchange and and racially abuse families using the Leisure Exchange without arrest. There were videos of this kicking around somewhere on YouTube, if they have not been removed.

When the cops go home, the fash will try to cause trouble.