For all the hyperbole tweeted online, notorious neo-nazi rabble rousers such as @englishmaker and Liverpool's failed pub singer Les Seavor (@ublocks) pretending fascists would be descending upon Bradford in their thousands, only a splattering of eighty racist idiots according to the police and the media, could be arsed to show up and march, on the day. Dripping wet, noses running, trying their best to snarl and sneeze at the same time, the EDL's finest army of losers failed to capitalise on the Paris murders, soaked to the skin, sad and incredibly lonely, looking so pitiful, anti-facsist passers-by had to fight the temptation to drop pennies into their tacky merchandised hoodies. 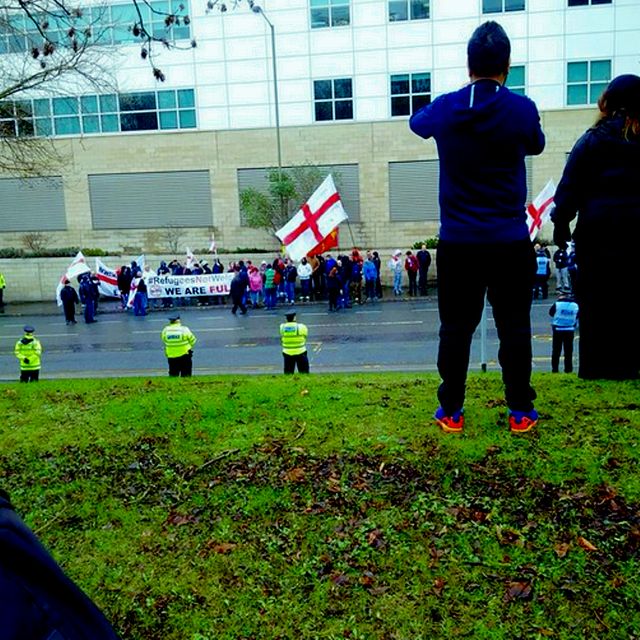 Not so much "coming down your street" as slithering down your drains, taking tough yet turgid as damp cardboard, what remained of the small-town Islamophobe gang was well and truly a damp squib. Like Adolf Hitler, they compare religious minorities to rodents, however the only rats in Bradford City Centre were white, balding and of the "drowned" variety, some of whom had spent hundreds of pounds on train and taxi fares to stand idly getting soaked in typical Pennine showers with nobody listening to their pathetic anti-immigrant and anti-Muslim bile. If only they wore Peter Storm rather than Stone Island, they might have left without needing a change of underwear as drip by drip, the would-be "football casuals" got casually soaked to the smalls on this typical Bradford saturday lunchtime, their sodden jeans heavy with precipitation and the muddy puddle splashings of passing police vans.

The worst thing to do, with wet trousers, is to be desperate for a piss. Whilst antifascists partied on Broadway and the City Park, sheltering now and again for a well deserved coffee or two, as the rain got heavier, sloshing perfunctarily on flat lager can after can, left the EDL's fucksoldiers dancing around needing the toilet. White pride beefs the warped Aryan ego, racially abusing passing Asian families with little kiddies, but is of little use when you are alone, damp, depressed, and wondering what the fuck you are doing stood around in a cattle pen, getting wet, for nothing, when your real friends (if you have any) are at home, feet up, warm and cosy, watching a movie and eating pizza.

The ever-dwindling band of EDLers are advised to change hobbies to trainspotting. At least, that way, they can stay dry hovering under cover on a train platform, grumbling at immigrating trains with darker liveries.

Read this for major lols.

Adolf Hitler was a failed artist.
Our Les is indeed a failed pub signer.

I bet Les has gone quiet now with the totally pathetic 80 turn -out!!!