There is an unwritten rule for British fascists with fame credentials to hide their hate from the masses, but shamelessly, former Big Brother celebrity Josie Gibson has chosen to come out in support of Stephen Yaxley Lennon, betraying all the Asian and black voters who rang up and texted support for her, during the television talent show. And gaulingly, this brazen Islamophobe is happy to racialise the Paris attacks to 300,000 young UK followers for cheap publicity. This pathetic excuse of a celebrity is totally and utterly dispicable, knowing mainstream media voices like hers normalise neo-nazi hatred of minorities, ultimately resulting in discrimination, marginalisation and racial violence. 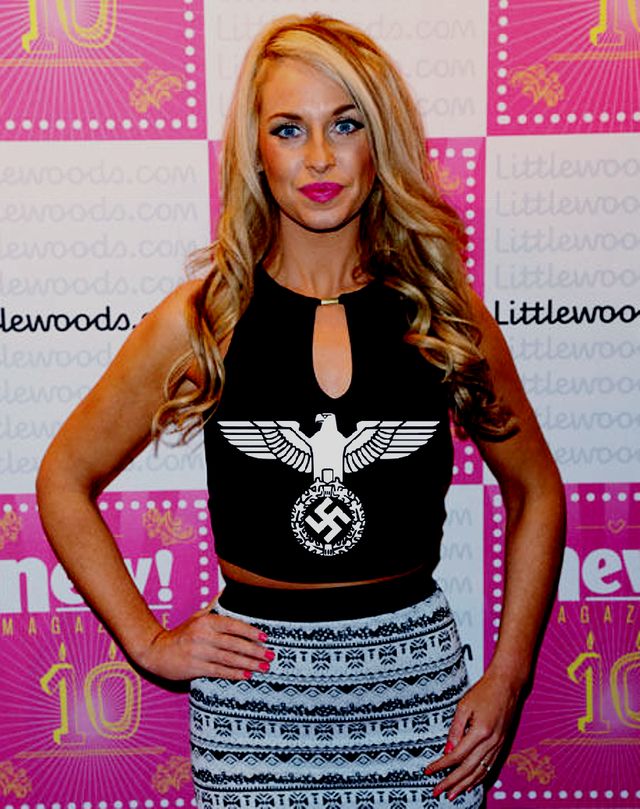 The Daily Mail, fascism-championers with a track record, have even posted Stephen Yaxley Lennon's hate video for all readers to watch, unsubtely helping to populaise his repulsive racist views (deliberately or by accident). Yaxo. (Tommy Robinson) has fallen into the wayside since leaving the EDL, and he is currently jumping for joy that a vacuous ex-Big Brother celebrity model has come out in his support when even other Z-list other celebritities refuse to do so. On Twitter, she is still shamelessly defending the former EDL-leader, backing up his vile bigotry rather than making the usual (it's a fair cop etc) half-hearted apology claiming she is not sorry for hating on Muslims. #Bluehand's James Bond fantasists have reportedly already lubed-up their fingers ready for celebratory solitaire action, stacks of Kleenex at the ready.

The old statement of defence "I have black friends", has been rehashed by Josie, claiming she was only against extremists and had "Muslim friends" and "lived next door to a mosque". As she and we know, plenty of EDL sympathisers live next door to mosques. Some vandalised them, post dog fasces through their letterboxes, and get jailed. In the 1930s, celebrities and intelligencia including authors, scientists and radio presenters supported racist and far right views, including eugenics. The Daily Mail itself, with the backing of millionairre Lord Rothermere, printed the now memorable pro-fascist headline "HURRAH FOR THE BLACKSHIRTS".

Celebrities giving backing to racist politics provide delf-justification to violent, murderous criminal thugs. Few other celebrities worldwide are openly racist with the notable exception of Katie Hopkins, who longs to see refugees dead, she has not as yet nailed her far right political colours to the mast, even though she happens to be a Daily Mail employee. Like her American showbiz namesake Mel Gibson, Josie is on dangerous ground. Surely if she wants to sell herself as still "being a thing" to the British public she should think twice about championing repulsive fascist fuhrers. Tommy Robinson is expected to help relaunch Pedida UK next year to a blaze of publicity, and the more mainsteam voices in support of his hateful ideas, is a wet dream come true for the convicted wifebeater and one-time drug dealer from Luton.

ANTIFA must be ready to counter any rejigging of the British far right whenever it happens, the EDL on its last legs after Saturday's drizzly humiliation for the fascist thugs.