Coming at a time when hatred and suspicion of Muslims worldwide is at all-time high, Katie Hopkins of all people has surprisingly received a call which "blows her away" by justifying her opinions in one fell swoop. A supposedly honest, supposedly devout Muslim caller rang up Katie's controversial LBC phone-in, and claimed that he had to keep his children away from mosques as they were teaching kids to be terrorists. Alarming yet easily dismissable by the (un-Murdochified) facts that the vast majority of British Muslims abhor terror, this controversial caller has been automatically believed by many sections of the media, without being verified as authentic. Few if any radio talk-show callers are verifiable, but few if any callers are believed to be genuine sources of true information. The caller might or might not have been real. He could have been a genuine person with worries on his mind albeit groundless ones. Some people are afraid of bogeymen in the night, and shield their kids from the dark. Whatever his status, the caller's anti-Islamic fears given credence, is yet another setback for those of us striving for peace, justice and equality. 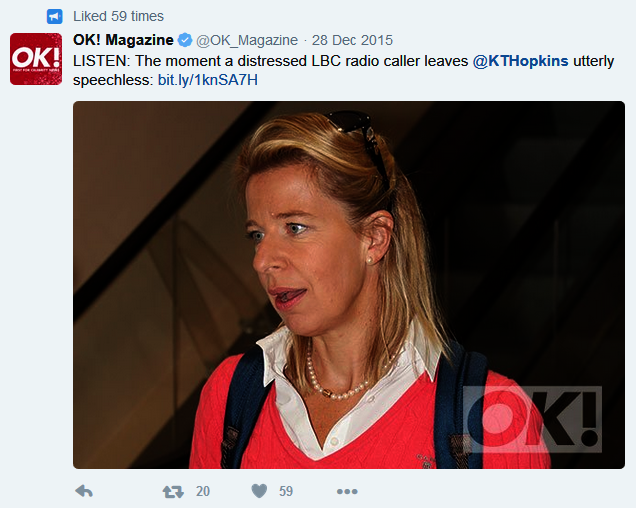 From Botox to bollocks - Desmond's OK Magazine Gets Political 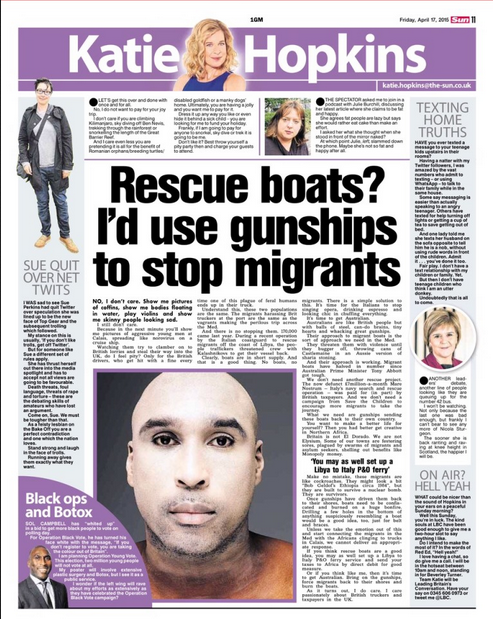 Hopkins Wants Refugees To Be Murdered 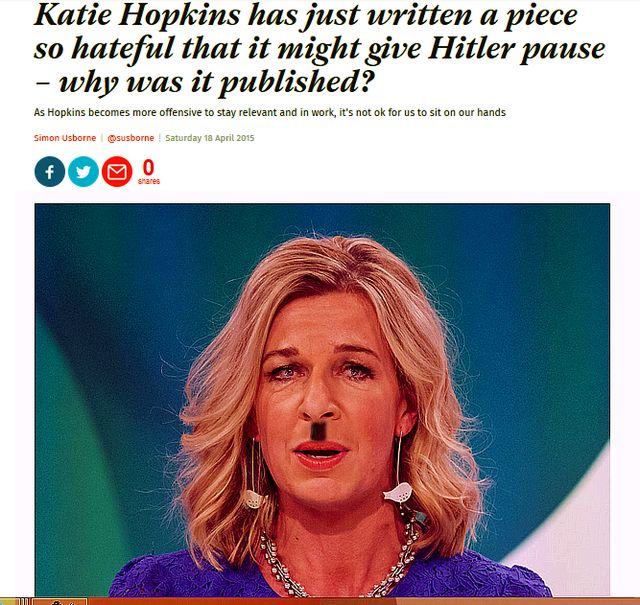 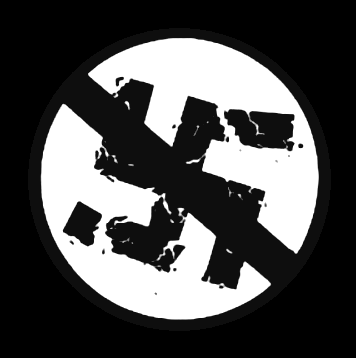 Although alarming, nothing in the caller's conversation was verifiable. It doesn't mean he was in-fact anything but genuine, but one has to be sceptical whenever supposed "whistleblowers" fail to provide investigable fact. Anybody who uses social media including Twitter and Facebook will have come across trolls, some more sophisticated than others, some of whom will spin fanciful tales with a deliberate political twist to influence impressionable minds. Far right political organisations such as Britain First and the EDL have been shown to concoct anti-Muslim stories that thousands of their followers lap-up and believe as fact. Not much thought and sophistication goes into a Britain First hoax, however there are plenty of cleverer rightwing organisations which one could not put it beyond them to falsify a radio phone call to maximise Islamophobic fears surrounding terror.

Callers sometimes ring such phone-ins with false identities, accents, biographies, deliberately to stir-up alarm and deceive the listeners. There is absolutely no reason for a radio host to take a surprise caller at face value, regardless of any "whistleblowing" content they reveal during their conversation. The most intelligent radio host will be unpolitical (or keep their views to themselves)l allowing cold, calm questioning to assess data, and help catch out imposters. Katie Hopkins neither falls into the category of intelligent or unpolitical, her views about minorities including refugees and people with disabilities, beyond the pale. Most of all, she is an outspoken anti-Muslim bigot. The fact a supposed "mosque-terror whistleblower" materialised on his programme, should be a cause of suspicion.

If an extreme anti-Jihadist think tank were to set up a hoax caller with a certain degree of listenability and community / faith knowledge to smear an entire religion, this could be so easily done. Long before the days of the internet and trolls, "shock jocks" became the staple diet of propaganda media stateside, broadcasting lumpen opinions to their listeners, scapegoating minorities in the belief the majority would do "the Full Niemoller" and steer clear of either sympathy or solidarity for the stigmatised "Demon Of The Day". In America, since the dark days of Senator McCarthy and his "Reds Under The Bed" anti-communistic witch-hunts, political opinion has been subtly interwoven into entertainment broadcasting. Opinions have been concreted into news, into chat, into sports, and of course, into celebrity hero worship, to directly affect the way puzzled listeners and viewers react to the world. The Hollywood actors and performers blacklist was the result of governmental bullying of one of America's most liberal institutions.

Social conservatives baulk at opposition to bigotry, arguing blindly that free speech and freedom of thought are all that matters, however history tells us there is no such thing as the concept of "freedom of thought" when Joe Public is persuaded to think in a divisive, nationalistic manner. The Nuremberg rallies are a deadly reminder of the ultimate political brainwashing, as millions of ordinary Germans were brainwashed into hating a religious minority to and beyond the point of indifference when the genocide began at Auschwitz. Americans haven't been acclimatised to a comparative level of inhumanity, the African American Civil Rights movement popularly embraced by all communities to a certain extent, however racial injustice never quite went away, as didn't the desire for global warfare. Throughout the Vietnam era, when black Americans lost their lives for flag and country, those who returned home experienced homelessness, unemployment, and relentless scapegoating that bloodied the celebratory optimism of Martin Luther King.

Long before Muslims were the main course on the menu of hatred, Jewish people, black and Hispanic Americans have been the target of derision, stereotyping and hatred across all the main US media networks, as "politically-incorrect" conservative political opinions continued to be infused into radio and televisual entertainment. Loathed by some, but loved by many, shock jocks built careers around strengthening racial divides, divides still alarmingly apparent in modern day America.

People are not born racist. Bigotry is learnt, not just from parents and peer pressure but what everyday people see and hear through the media - newspapers, radio, television, and now the internet. New media can open minds, the Anonymous movement testament to younger generations starting to think for themselves, however ageing global media barons continue to wield significant influence over logical thought. in France, the fascist FN have become alarmingly popular with young people, thanks to rampant Islamophobic and anti-Roma political discourse via the media, especially in cementing public attitudes surrounding muslim headdress.

The United Kingdom has largely resisted Shock Jock media culture. Up to recent years, our talk show hosts have courted controversy, sometimes airing unpleasant opinions, but our most "shocking" conservative radio presenter James Whale was never in the same league as American network hatemongers. Katie Hopkins changed all that. Rightwing radio and newspapers have given her the licence to champion eugenics, and enthuse about aborting disabled foetuses, along with calling for refugees to be killed by the sinking of boats, along with her blatantly anti-Muslim tweets. Up until now. British celebrities have always erred on the side of caution, reluctant to be viewed by the British public as bigots, but in the ear of reality television soundbites, that has all sadly changed. In Nazi Germany, many famous people including actors, newsreaders and musicians openly supported anti-Semitism and national socialist politics. By giving celebrity haters like Katie Hopkins a voice, we are as a society risking legitimising abhorrent hatred which seriously threatens our renowned sense of compassion and fair play. How many Katie phone-ins, tweets and photo opportunities before the majority of white British people think like her??????

There is nothing to suggest LBC or Katie were trying to deceive the public with this caller. Katie was reported as being "taken aback" by what the supposed Muslim caller had said, however there are a considerable number of professional far-right Islamophobic organisations who could have been behind the call, if it was not as genuine as first believed. Arising amidst in a climate of fear and suspicion perpetuated by warmongering politicians and scapegoating rightwing newspapers, engineered troll calls are not beyond the realms of opportunity. One thing is for sure - regardless of the authenticity of the caller, the media attention given to the man's unsubstantiated fears of mosques "breeding terrorism" give credence to yet more negative perceptions of Islam in the public realm. If a caller had rung in, claiming he had met space aliens, he would have been roundly ridiculed as talking absolute nonsense based on the widely-held assumption that UFOs and little green men don't exist, and yet an equally unprovable caller making claims which go against all understandable evidence, is taken as truth.

Against a backdrop of the most powerful influence-makers in the world Rupert Murdoch and Donald Trump openly vilifying Muslims, the actual truth of the vast majority of British Muslims rejecting ISIS, marching against them, and helping rescue Northerners in the floods, falls on deaf ears and goes unreported, whilst Islamophobic myth starts to become widely believed. The moment unproven radio caller stories becomes fact, is the moment rationality permanently gives away to prejudice, is the moment the people of Nazi Germany take notice of the words of Adolf Hitler.