The "not-so-great" and the "not-so-good" turned out to march from Birmingham Airport's station to a carpark in the middle of nowhere for their spectacular opening fascist event. EDLers turned up in their dozens hoping for some action, having snorted nostils-full of regular marching powder, however in the damp Midlands drizzle, their fascist get-together was nothing more than a damp squib. Most of those who marched against Muslims were hardcore extreme rightwing football hooligans, however the quiet event was so uneventful that several fell asleep mid walk, shuffling along like clueless zombies wishing they were elsewhere. Even standing on a cold, blustery train platform, trainspotting, is far more exciting than Pegida UK. A damp squib, pure and simple. 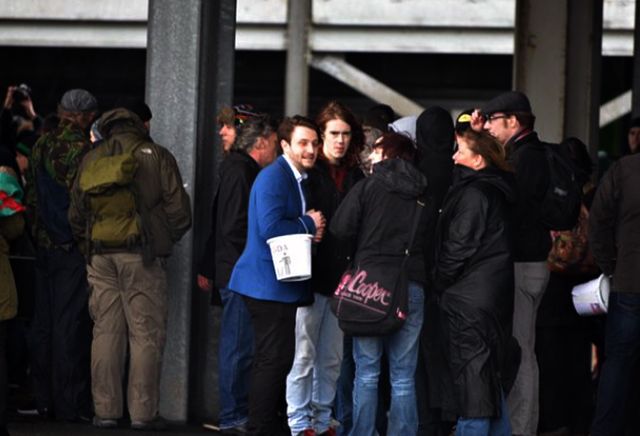 Upon arrival at their NCP Nuremberg, dressed up like the Emperor's New Clothes, the Pegida Experience failed to deliver, the soaked marchers greeted by a tedious piece of classical music especially written for Pegida Dresden, which was hardly noticed by anybody, not even the press. They could have at least played some Skrewdriver to cheer up bored-stupid nationalist footsoldiers. Welcomed by an array of expensive screen-printed flags and banners while chased by moneygrabbing Tommy's "bucket fannies", a small handful of Kippers in blazers who looked like they moonlighted in a 1950s holiday camp, it was all rather nothing.... Absolutely nothing.

Tommy Tit eventually spoke, ranting about how Britain should round up Muslims and do this and that to them, Nazi-like, but he lacks the oratory of Oswald Mosley. His droning vocals were nasty, they were vehemently hateful, they were typical of his fascist mindset, but they were not rabble-rousing. By the time he advanced onto saying that "there was so such thing as a refugee", it was yawns all round. 27 buckets circulating amongst a pitiful crowd of 125, calls for "spare change" pestering every Pegidan repeatedly, added to the hefty cost of last minute train fares, it would have been far cheaper to buy bulk packs of Stella while watching crass Pat Condell rants on YouTube.

By now, many Pegidans were wondering what the hell they were doing there, instead of sitting in the pub or attending the footie, those not subject to banning orders. The mind-numbing tediousity of Pegida's opening fixture, will hardly guarantee their return for their next silent goosestep.

Pointless was an understatement.