With Brexiteers gaining in online polls, and in some instances returning to the lead, due to a narrow Thatcherite #Brexit agenda based solely around immigrants and immigration, the future looks frighteningly bleak for the United Kingdom post-Brexit, especially as racist pornographer Richard Desmond, Dacre and Murdoch are all-set to continue to use the fear and loathing they single-handedly helped incubate towards the European Union to turn on EU migrants, before turning their emphasis upon halting all immigration including refugees fleeing death and destruction. Once our extreme rightwing media megalomaniacs get a taste of blood, like sharks circling a wounded swimmer, the unelected yet ultra-opinionated thought-makers will pick off one target after another, as the clock is turned back decade after decade, reversing every last vestige of social progress back into the dark ages. 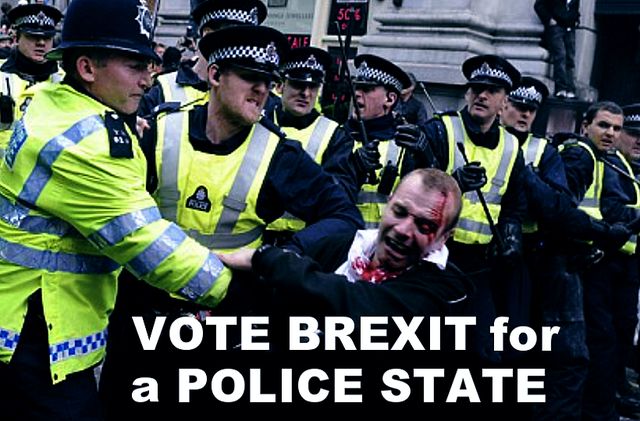 Cancelling human rights is already central to the Tories hardline rightwing social agenda, and the dinosaurs of the media boardrooms have their sights set upon an oppressive, bleak and uncaring monocultural future at parallel with the regimes we defeated in the second world war, a future of unemployment, suspicion, eternal scapegoating and racialised political policing against anybody daring to speak out against the #BrexitReich.

With Scotland set to push for independence to re-enter Europe, England, Wales and Northern Ireland will be subject to continual rightwing media control. Firstly, after independence, the papers will refocus specifically on crimes committed by Eastern Europeans (interspersed by offences committed by Muslims), to heap pressure upon the Tory government to expel all foreign migrant workers. When jobs fall like ninepins after #Brexit, global investment tumbling, far right groups will, like the press, temporarily switch focus from Muslims to EU workers, pitting English against Polish workers, causing tensions to spill over onto the streets. Nationalism, unleashed by the independence vote, will worsen beyond all recognition at the lower end of the wage scale, whilst bosses continue to award themselves ever bigger wage increases, racial warfare the ultimate smokescreen used by Maggie Thatcher to divert attention from the excesses of capitalism.

Rather than disbanding, as what would have happened if #Brexit had lost, UKIP will be reinvigorated, and will continue on as a pressure group to keep the pendulum swinging rightwards, with the help of their supporters in the media and in the Conservative party, campaigning for everything outdated and horrific from the reintroduction of fox hunting, zero tax for the very wealthy, and the return of the death penalty. Jimmy Savile fans amongst the Kipper and Tory ranks will be hoping corporal punishment in schools becomes legal again, whilst fascists ironically campaign for courts to introduce birching, whilst continuing to tweet away about "barbaric" Sharia law.

The whole of Scotland cannot however be spanked into line by Thatcherite Tories, and sooner rather than later, via politics, and acts of civil disobedience, they will get their way, leaving behind an increasingly violent and sectarian Belfast and an apathetic Wales, the latter of which lacks the clout to leave behind the Union.

Without Scotland, England will be ruled forever by rightwing politics, more than likely, in the short term by the Tories under Boris Johnson and ultra-rightist cohorts. There are many parts of England that have always been Tory, especially the inner shire counties of Middle England, and others that only voted for Tony Blair because Rupert Murdoch said so, to allow the Tories to regroup out of the spotlight, to reconquer later. Every PM since the late seventies has been decided by the pressure and influence of Murdoch, and with the hard-copy rightwing gutter press set to last another twenty years at least, this allows more than enough time for domineering media barons to keep most English counties blue in the future decades. Without any Scottish MPs in Westminster, England will be mathematically forever Tory, an ever increasing wealth and class divide between north and south ensuring the Tory faithful will remain eternally faithful to Conservative Party politics (with the odd, pressurised UKIP diversion).

When unemployment and / or far right activity feeding on the xenophobic atmosphere generated by the Sun, Mail and Express begins to bite, and intolerance bites towards EU migration, EU countries like Spain, France, Italy and Portugal exacting revenge (which they undoubtedly will do) towards isolated, non-integrated ex-pat communities, and Polish and other European nationals return to Europe on the back of a devastating recession caused by #Brexit, and Britain stops welcoming refugees, black and Asian people will find life increasing becoming untenable. if Donald trump can turn white, black and Hispanic against each other in the wealthiest nation on the planet, working up old-fashioned 1970's racial tensions will be an absolute doddle.

Vilifying African-Caribbean people alongside Muslims will be easy meat for ultra-rightwing Tories and their dog-whistle handlers in the press. A beefed up National Front / National Action, Infidels, or whoever they are, will always be ready to step up to the plate to do the governments dirty work when backs are turned, as happened in recent history with Golden Dawn in Greece. Whilst the media is quick to turn upon migrant communities as a supposed cause of racial tensions, real tensions arise courtesy of front page headlines and angry white men in pubs reading such headlines and getting in a manufactured huff about "the other".

Racial attacks against immigrants and Muslims are at an all-time high thanks to Desmond, Dacre and Murdoch, who must be hoping and praying their is no god to answer to, for all the hatred, death and destruction these three men have caused Britain and the world. The rise of the far right has not just allowed violent Islamophobia to flourish, but also old-school anti-Semitism to return, aided and abetted by social misfits such as National Action and Joshua Bonehill who fed the hate of anti-immigrant headlines, converting it into traditional neo-Nazi hate for the modern age. Old-fashioned neo-nazis and anti-Semites have got gone away, despite the tabloid media trying to paint the Labour Party as the sole source of anti-Jewish hate. Blinded by sheer hate, and a misguided belief flying the Israeli flag at EDL marches would produce Jew-loving Muslim haters, as if the two were exclusive, Pamela Geller, and her streetfighting puppet Tommy "The Tit" Robinson, had unknowingly helped nurture the next generation of Adolf Hitler-loving anti-Semites.

When Stephen Yaxo Lennon left the EDL, members rebelled against the "Jew flag" as they called it, spurred on by their openly anti-Semitic Infidel offshoots who already had begun to openly hate Jews. Since then, despite their Christian-fundamentalist Rapturist twitter Trumpite pals displaying Israeli flags as their avatars, EDLers on social media have moved further away from pretending not to hate Jewish people, to the extent that many Kippers and even Tommy Robinson himself now share anti-Semitic memes against George Soros, accusing him (just as the nazis had done towards its own Jewish communities) of welcoming foreigners into Europe to destroy the white race, or "white genocide" as they call it. Not that Tommy Robinson was not a fully-fledged member of the anti-Jewish BNP, as were the rest of his family and friends who he had registered with the party before Nick Griffin's demise.

Every British Islamophobe generated by the EDL, was aided and abetted by manipulative rightwing hate rags - the Express and Mail. Whilst the Mail has a shamelessly Nazi Jewish-hating pedigree, Richard Desmond's is of a Jewish immigrant background, which demarcates his fostering of anti-Muslim hatred, and with it a climate in which anti-Semitism flourishes, as a betrayal for his own faith community. As noted by Hope Not Hate, the UAF and Tell Mama, most Islamophobes are readily interchangeable with anti-Semites, in the UK at least, where few bigots feel solidarity with either the Palestinians or Israel, for that matter. Non-Christian, non-white foreigners are foreigners and nothing else to the thuggish Express, Sun or Mail reader. Ask anti-fascist / anarchist Jewish community organisation Jewdas about how Islamophobia has nurtured its genocidal cousin anti-Semitism, and they will reveal all.

Thanks to the UKIP and their Thatcherite cohorts, Brexit Britain will be proto-fascist and street fascist. Brexit Britain will be totalitarian. Brexit Britain will be racist. Brexit Britain will be sexist and homophobic. Most of all, #Brexit will be disenfranchise the poor and persecute dissenters in age-old British tradition. Anybody thinking leaving Europe behind will "liberate" British citizens, need to think again. With water cannons on standby in London, whenever a future Tory home secretary commandeers them in interests of "national safety", there will be no inch given for anarchists and anybody else who wishes to protest against government policy, once human rights are lying dead and buried in the dustbin. The Poll Tax riots would never be allowed to happen again, while neo-nazis roam free, unfettered by dismantled anti-hate laws.

Whilst rejecting the ballot box as the root cause of corruption and oppression, steering clear of endorsing rival brands of capitalism by not voting, the #Brexit vote is fundamentally different.

Once Britain leaves behind the safety of the EU. there will be nobody to protect us from the excesses of unbridled Thatcherism, with echoes of Nazi Germany close at hand. Police state ahoy!