The area around the ancient sacred site of Nine Ladies Stone Circle, a place of outstanding natural beauty, is under threat by the quarrying companies Stancliffe Stone and Marshalls PLC. The Nine Ladies protest camp has succesfully managed to stop the companies quarrying for the last 4 years, but the end of August is a crucial time and help and support is much needed. 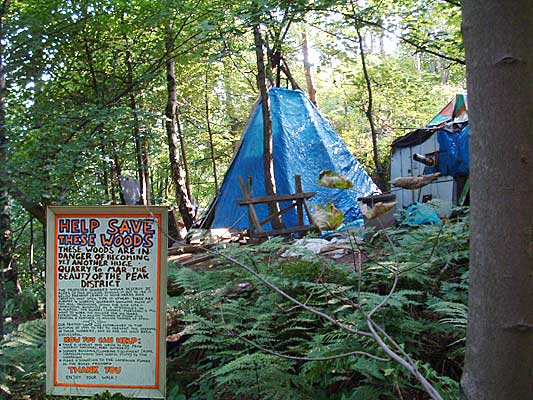 Stanton Moor, situated within the Peak District National Park and near the village of Stanton-in-the-Peak, is a place of outstanding natural beauty, where lush woodlands lead to the top of a hill and the ancient sacred site of the Nine Ladies Stone Circle. The whole area is a haven to fallow deer, badgers, rare bats and plants and there are natural springs that supply water to the local village.

The Nine Ladies area is also where Stancliffe Stone Ltd and Marshall’s PLC want to re-open two dormant quarries, Endcliffe and Lees Cross. These have lain dormant since the 1950s, when the destructive quarrying stopped, giving way to today’s re-generated woodland. The companies now want to extract 2.4 million tonnes of gritstone from the hillside over the next 40 years. This means quarrying 35 acres of woodland to within 250 metres of the stone circle and leaving behind 1.2 million tonnes of spoil.

A direct outcome of this will be the degradation of the hillside and the setting of the Nine Ladies Stone Circle and the destruction of the local eco-system, as well as a rise of noise and pollution levels in the wider area due to increased lorry traffic. There are further fears that quarrying will cause landslides, as the site lies along a geological fault line, and that local spring water supplies will be affected. All this for the noble cause of supplying building materials for projects such as McDonalds in Blackpool (judging by the case of another quarry in the nearby area).

The companies’ plans to wreak mindless destruction however have not gone unchallenged. People have actively protested against the re-opening of the quarries and established a protest camp on the hillside in the autumn of 1999. Over the years this has not only survived but grown in size and numbers despite continuous eviction threats. The last eviction threat was at the start of June and was based on the ludicrous accusation by the Peak District Authority that the camp was a threat to the environment - the same environment that they are considering granting permission to be quarried!

The end of August is seen as a crucial time by protesters. The time for granting permission is coming to an end, and there is a strong chance that the outcome will be in favour of the companies. So help and support is especially welcome and needed.

* Take up living in a tree-house!