Protest in Chester: Optimism and Observation

Chester held its own welcoming committee for the President un-elect last night, complete with a seven foot papier-mâché statue of Bush and a list of 20 indictments against the man. 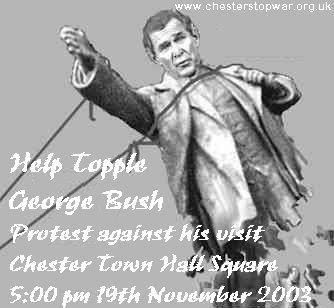 The two hundred person crowd cheered as the statue was toppled before Chester’s town hall at the end of the hour long protest which was put on by the Chester chapter of the Stop the War Coalition.
“We need to stop his policies from getting a grip in this country”, said activist, organizer and social worker Richard Akinson. “There is a lot of work to be done and that is part of our campaign trying to educate people about what Bush’s policies are and why they should be opposed.”
Many protestors hope that Americans will see how unpopular Bush is in England, which would damage him in upcoming presidential elections. Mr Akinson said: “I think it’s going to stop bush using this as a source of sound bites and film shots for his re-election campaign.”
Fancis Lane, a teacher, postal worker and member of the Coalition expressed her resentment of Bush and Blair: “There are a number of reasons why people don’t agree with Bush and his policies. Personally as an ecologist Global warming and the way he has failed to support the Kyoto protocol is a big issue for me. And the other one is the way he and Blair have failed to support the nuclear non- proliferation treaty which is on the verge of collapse.”
The Chester Stop the War Coalition has been organizing since October of 2001, by holding meetings, protests, discussions with city and school officials and by handing out information during the busy weekends in the town center. The coalition has maintained it’s resilience despite heavy opposition in what many call a ‘very conservative’ city which has been marred recently by racial and anti-homosexual rows.

Many activists would not give their names due to recent police and community harassment. One told of a recent Stop The War Coalition meeting which was attended by police. Chester law enforcement were on the scene at last night’s protest but declined to comment on allegations of MET involvement and the allegations of MET & US Secret Service coordination on requesting numbers of expected protestors.
Mrs Lane said: “There is a serious issue of freedom of speech especially this week when there’s been so many movements to restrict protesters by not letting them go to where they’re allowed to go. I mean there are 14,000 police shifts over the next couple of days and when you think of the money it’s costing... and they’re saying you can go here and not there, it’s an issue about freedom of speech!”
Another Coalition member who wished to remain anonymous spoke of their meeting with the University Chester College president regarding the protest, and being told the university was not a political establishment. The person expressed disappointment with the lack of student response and an administration that would not allow political groups to dissent. “It’s the students who will be living the life of continuous war”, they stated.

When asked about the suspension of some students who have walked out in protest of Bush/Blair policies Francis Lane commented: “I think it is very heavy handed considering everyone under 18 does not have the right to vote and people have to express themselves in other ways. They can walk out of schools as they have done in the past, strike at universities and make their views known.”

Protesters and organizers were optimistic about their approach to combating the policies of Bush and Blair.

Mr Akinson commented on the motivation for protest in the local populace: “A lot of them are already responding I mean look at who we have here tonight, and we have a full coach load going from Chester on its own to London to join the protest there tomorrow.”

While Mrs Lane urged: “carry on building a grassroots movement and a protest movement. I mean all over, the world is looking at these protests just now, it is a global movement.”

For more information about this protest and the Chester Stop The War Coalition visit their website at: www.chesterstopwar.org.uk. A list of twenty indictments against Bush and other materials can be found there as well.