A protest against Asahi Glass Fluoropolymers UK Ltd (at their Thornton Location) was harassed by police today even though it was prior arranged with the Police.
In total, around 25 Officers of the law turned out to intimidate the 7 protesters. 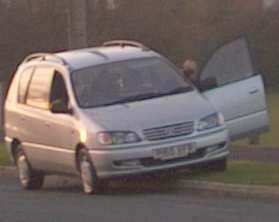 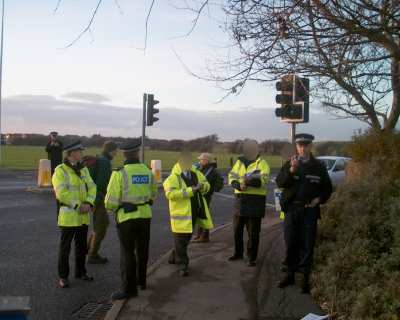 The police and AG rep's harassing one protester 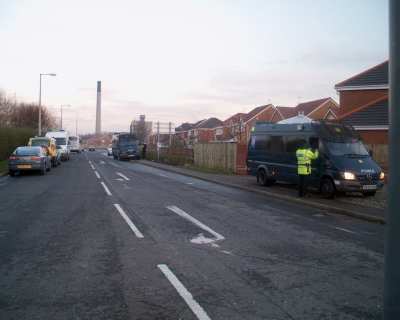 The army of vehicles (one is not in the shot) 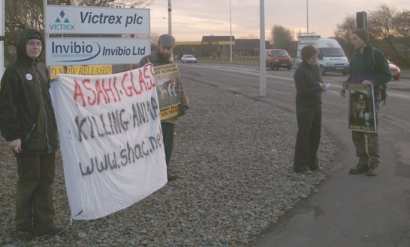 The protest itself (hurting anyone? no)

An Asahi Glass demonstration that had been arranged with the Lancashire Police as under the terms of the Injunction (see www.shac.net for this ridiculous document) was harassed by around 25 police officers yesterday.

http://www.lancasterARG.org.uk), which arranged the demonstration, was firstly subjected to being spied upon by police officers (See Pictures) from behind their unmarked police car door. Whether the police knew that we had seen them arrive is yet to be known, but their pathetic attempt to photograph the protesters was spotted and thwarted (by holding plackards in their way). However, this was not the end of the filming.

Soon after, a further van full of police arrived (bringing the total to 5 now - bear in mind that we had only been there for 5 minutes and there were only 7 of us). These officers also had cameras and proceeded to film us (you can see them filming us in some of the pictures). When asked why they were filming us, the officer with the video camera refused to say anything (several attempts were made).

Around about 10 minutes after setting up, 3 representatives of AG turned up to serve the injunction on us, asking for our names and addresses (presumably to add to the injunction list); what they didn't stop to think about was the fact that we had arranged to be at the protest with the police, so we already knew the injunction was in place.

The police tried every tactic possible to move us, and intimidate us, such as having one of their cars drive up and down the roads (presumably to make it look like there were more police about than there really were).

One of our protesters arrived with our main sign(s), (see the pictures) which consisted of 22 human sized letters spelling out 'Asahi Glass Puppy Killers', which the police quickly removed from display. According to DI Upton (the officer in charge of the 'Operation') "the signs will distract drivers, and you wouldn't like to cause a crash now would you?". He failed to realise that 7 protesters and a few signs were not as much a distraction as the dozen or so police officers in yellow coats wandering all over the road.

By this time, two riot vans had turned up complete with half a dozen officers each and a further car with 2 plain clothes officers. These officers didn't do much except take more pictures of us and stand by their vans.

Were riot vans really necessary for 7 protesters? (It could not possible escalate into a riot as by law there must be 12 or more people involved.)

After the representatives of AG had served injunctions on everyone there (one case was just a shout followed by the throwing of a document at the person), the police informed us that we had to move to the designated area which was a little way up the road (where nobody would see our demonstration) even though we had arranged to be at the traffic lights with a DI Birk (spelling might differ) of the Lancashire police. When told this DI Upton stated 'I am the officer in charge of this operation, what you have been told before is wrong', when questioned on whether he was saying that DI Birk was incorrect in saying the traffic lights were the place to be he stated 'No, i do not mean that he told you wrong information' followed by a quick restatement of the fact that we have to move or be arrested. We asked to speak to DI Birk but we were told that that would not be possible because he could be anywhere.

One of the protesters had at one point walked to a car and put something in the boot. On returning from the car a police officer gave him a producer (meaning he has to go and show the police his license etc...), what the police failed to note that the person in question had not put the keys in the ignition or turned the engine on, therefore making the request for a producer illegal.

After ten minutes of arguing with the DI, we decided to move elsewhere (not to the designated area, but somewhere outside the exclusion zone). We were duly told that if we put up banners or posters that we would be arrested for distracting drivers, we were also told that if we leafletted anybody, we would be arrested. (What kind of demonstration would this be? Just seven people standing somewhere shouting!)

We proceeded to move our protest to the island outside Safeway (which is a well outside the exclusion zone). One of our cars had lost a passenger so they went looking for them. They were stopped by the police and one of the passengers of the car was arrested for 'breaking the terms of the injunction' even though we were plainly leaving the area whilst searching for the missing person. The arrested protester was allowed to leave after giving her details. The driver of the vehicle was for some unknown reason not arrested.

Around 10 minutes later we all regrouped at the roundabout outside Safeway and were informed that some of us had been told that if we leafletted any motorists we would be arrested (reason for this unknown).

The police didn't bother to come and harass us at our new location as they knew that their threats were pointless and nothing could be done. However, they did waste more time and money by driving the landrover containg DI Upton and two other officers round and round the roundabout for half an hour, presumably trying to intimidate us.

This all goes to show that once again the police have wasted a large amount of tax payers' money and police time in order to protect a immoral company, and to suppress our right to protest (something which G W Bush so blatantly applauded recently).

One final note, we are not sure whether the helicopter hovering around above us was to do with the police but it could have been.