The two Manchester protesters who covered a British Petroleum stand in fake blood during the 2002 CBI conference in Manchester's G-MEX appeared at the crown court last week charged with criminal damage. Their action addressed BP's greenwash as the company sought profit from catastrophe in the impending Iraq war and the Baku-Tblisi-Ceyhan pipelines project. The jury found them not guilty of 4 counts of damaging clothing but could not reach a unanimous verdict on the damage to the stand. Eventually the pair were found guilty of the charge.

The G-MEX incident proved humiliating for security organisers, coming two days after protesters successfully stormed the building. CBI chief Digby Jones told the press that he would ensure the pair received maximum punishment. The conference had been besieged by protests over corporate globalisation, equal pay for women, fire service pay and the Iraq war. 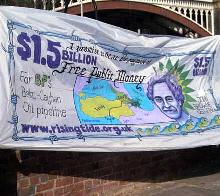