A meeting has been arranged by the Peak District National Park Authority to enable local people to voice their concerns and objections to the proposed A628 Mottram/Tintwistle Bypass which will go through across open farmland, moorland, a local nature reserve, and a section of the Peak District National Park.
Locally, councillors and MPs are supporting the scheme and little publicity is being given to those who oppose the scheme. This is an opportunity for the Peak Authority to see first hand that there *is* opposition to the scheme and that it is not a done deal as councillors would have them believe.

The meeting is to be held at Bradbury Meeting House in Glossop, on Thursday 15th July @ 7pm. There has been little/no publicity regarding the event, so please bring yourself and anyone else who opposes the proposed bypass, so that your objections and concerns can be heard.

Info about the proposals, the proposed route, and results of the sham workshop exercise are available from the Highways Agency website:

http://stopmottrambypass.tripod.com site (a bit unreliable though).

A new website providing info on the sites that will be demolished by the bypass and info on alternatives/contacts is in progress.

Thanks alot.
See you there.

when the new website it done, or if you're other people not connected to the anti-bypass website you listed, please let us know and we'll let other people know in the region, Manchester Earth First!
mancef AT nematode DOT freeserve.co.uk
www.earthfirst.org.uk/manchester 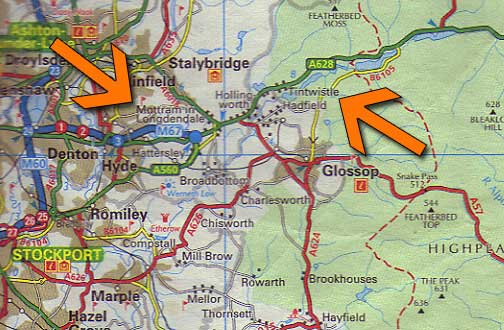 Just in case anyone was wondering where these places are...

The idea of building new roads to solve traffic problems is backward looking and takes no account of global warming and climate change. This local problem is something that affects everyone.

read grumblings about how busy the M62 is, join the dots from the East Manchester motorway spur to nowhere, add in a Stockport bypass bringing traffic round the south of Manchester, and see when you hit the M1...

Not all bad news?

Perhaps not all bad? I found this article in the Tameside Advertiser yesterday.

I'm not sure when it was written though (date shows day the page was viewed) but will be speaking to Pat Ellison later today, so hope to get the low down before the meeting on Thursday.

It turns out the main emphasis of the Peak Authority meeting in Glossop is to give local residents an opportunity to talk about all aspects of how the Peak Park is managed, so APT and CPRE are looking to populate the meeting primarily with people who want to put the Park Authority on the spot about why they think it's okay to build a dirty great road (as already mentioned, a potential motorway by stealth?) through a section of the park.

There is more carbon dioxide in the atmosphere than for 55m years, enough to melt all the ice on the planet and submerge cities like London, New York and New Orleans, Sir David King, the government's chief scientific adviser has warned.

Speaking on his return from Moscow, where he has been acting as the prime minister's "unofficial envoy" to persuade the Russians to ratify the Kyoto protocol to fight climate change, Sir David said the most recent science bore out the worst predictions.

An ice core 3km deep from the Antarctic had a record of the climate for 800,000 years and showed the direct relationship between the amount of carbon dioxide in the atmosphere and warm and cold periods for the planet.

Critical in climate records is the quantity of ice at the poles and in glaciers. Records show that at the peak of the ice age 12,000 years ago, the sea was 150 metres below where it is now. "You might think it is not wise, since we are currently melting ice so fast, to have built our big cities on the edge of the sea where it is now obvious they cannot remain.

"On current trends, cities like London, New York and New Orleans will be among the first to go.

"Ice melting is a relatively slow process but is speeding up. When the Greenland ice cap goes, the sea level will rise six to seven metres, when Antarctica melts it will be another 110 metres," he said.

Records of the 3km deep Antarctic ice core showed that during ice ages the carbon dioxide in the atmosphere was around 200 parts per million (ppm), and during warm periods reached around 270 ppm, before sinking back down again for another ice age. That pattern had been repeated many times in that period but had now been broken because of the intervention of man.

Carbon dioxide in the atmosphere had reached 360 ppm in the 1990s and now was up to 379 ppm and increasing at the rate of 3 ppm a year - reaching a level not seen for 55m years when there was no ice on the planet because the atmosphere was too warm.

"I am sure that climate change is the biggest problem that civilisation has had to face in 5,000 years," he concluded.

So-called "Preferred Route" for the bypass

Here's a pic showing the "preferred" route for the bypass.

I hope the local Greens are there, but if not, they will certainly campaign against this. I can try and get a local contact if anyone wants it.

I know they have quite decent votes out there in the Peak District and they might be able to apply some leverage on councillors in marginal wards.

Little Em, if you went, can you let us know what went on? also anything else?

I'm writing up a report about the meeting right now and I'll upload it as soon as I'm done. In brief, there were about 30 attendees. Of those, three (of which two were local councillors) spoke out in favour of the bypass proposal, whilst ten others spoke out against the bypass and expressed concern for the environment and support for alternative approaches. To all the concerns raised and calls for alternative approaches, the Park Authority said that they agreed entirely, which was promising. Quite alot was said during the meeting, hence my not attempting to fit it all in here. As I said, I'll upload something more detailed in the next few days.

WRT the Green Party, I wasn't sure whether they were aware of this issue so I've written to the the North West group asking what their position is and also asking for their support. If you've a contact please let me know who I should get in touch with. If support is likely to be forthcoming it'll be greatly appreciated: Whilst there are considerable numbers opposing the scheme, there is a lack of *formal* support from large and influential groups (other than the CPRE) and because of that - perhaps - a lack of visibility and coherence for the opposition, whilst the 'fors' (called the Siege Committee, of all things), backed by MPs and councillors, are very well organised indeed. Any influence that can be exerted at the Council level will be very welcome.

Thanks for keeping your eyes on this. Much appreciated.
Little Em

I received an e-mail from a Greenpeace Active Supporter this morning saying that as far as they were concerned this bypass was a done deal and nothing could be done to stop it - which is exactly what the local councils want us to think but quite a long way from the truth (take the Dibden Bay port that was rejected at the government level when everyone thought it was in the bag) . What a way to start the day. With attitudes like that, it's hardly surprising that we've new roads plastered across our countryside. Until the last foot of tarmac is laid, myself and others will be voicing our opposition to this scheme and providing a forum for others to do the same.
End of Rant
Little Em