Early last week activists occupied the Australian Consular Offices in Manchester in a protest against old growth logging in Australia. After seeing the destruction caused by logging in areas such as Victoria and Tasmania activists in the UK decided to target the Australian consulate.

Australia is home to some amazing areas of “old growth” rainforest, which have remained relatively unaltered by humans for thousands of years. Now, it is being felled at an alarming rate, even in supposedly “protected” areas.

In Tasmania, 90% of native forest felled is converted into woodchip for the Asian paper industry. Thus, priceless ancient forest is trashed and sold for $15 (less than £6) per tonne to make cardboard. There are huge campaigns against this logging in Australia, involving direct action blockades, tree-sits, marches and rallies, lobbying, and more. 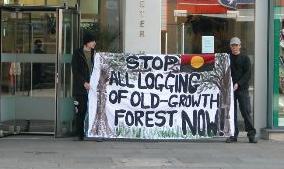