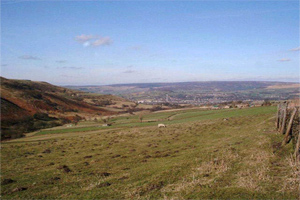 
The proposals for a by-pass for villages on the edge of the Peak District are now gaining momentum and have reached a 'crucial stage' according to the recent South Pennine Integrated Transport Strategy (SPITS) newsletter. The by-pass is part of wider developments for the A57/A628/A616 Woodhead route, strengthening the road links between the M1 and the M67 on the outskirts of Manchester. There are fears that this route could eventually become a major M67/M1 cross-Pennine link road. A significant component of the current scheme involves building a new road through a section of the Peak District, and other beautiful environmentally sensitive areas.

There has for a long time been talk and speculation in Sheffield about new road building in the peak district to improve links between the Sheffield area and Manchester. It has now come to light that what could eventually be the first stage of developing a new M1/M6 cross-Pennines link road, the A57/A628 Mottram-Tintwistle by-pass, is going through the public planning process. The July SPITS newsletter reports that the Highways Agency is inviting tenders for a Design and Build Contract for the bypass. The successful contractor will be responsible for the preparation and design of the road scheme, assisting in getting the project through the statutory processes, and finally for the construction of the bypass. The newsletter also reports that it 'looks inevitable that a public enquiry will precede implementation' of the by-pass' construction.


The proposed scheme comprises the construction of a 6km by-pass for the villages of Mottram, Hollingworth and Tintwistle, and modifications to the A628 and A616 corridor between Tintwistle and junctions 35a and 36 of the M1. The road building plans, as they stand at the moment, threaten the unique landscape around this area, more specifically the beautiful Longdendale valley, the nature reserve of Swallow's Woods, open moorland, and as some have argued, ultimately the whole of the northern Peak District by laying the groundwork a future major M1/M67 link road.

The campaign group in favour of the by-pass, strangely called the 'Siege Committee', argue that the bypass is needed to alleviate the heavy traffic thundering west through the villages from the M1 to the M67. According to the group, the traffic through the villages has increased as a result of improved road links on either side of the villages. The new road is essentially needed to separate out traffic, particularly the 40 tonne lorries, from the streets used by local residents.

Building the bypass and making improvements to the A628 through the Peaks would have the knock on effect of further increasing traffic levels through the park, and impact upon the environment and the people living in the park. Opponents to the road scheme argue that traffic restraints are needed for the existing roads, not more roads. According to the Campaign Against the Mottram and Tintwistle Bypass by-pass opponents' calls for traffic restraining measures on the A628 have always been knocked back as unfeasible and the by-pass presented as the only viable solution. However, opponents argue traffic restraints on the A628 have now been included in the road scheme because of concerns raised by the Peak Park Authority over the impact of increased volumes of traffic in sensitive areas of the park. So it seems that traffic restraints are now feasible, which raises even bigger question marks about the by-pass being the only viable alternative to the current traffic problems. Opponents to the bypass also worry that building the bypass is a means of introducing a 'motorway by stealth' across the Peak Park.

Pressure for the alternatives to the bypass to be explored again are mounting. A meeting with the Peak District Park Authority recently took place in Glossop where people's concerns about the environment were raised, and support expressed for alternatives. The alternatives proposed include: re-opening of a train link for freight, which could be loaded at a terminal just off the M1 near Sheffield, running through Glossop and on to Hattersley; imposing weight restrictions on the A628, as was done with Snake Pass; improve safety and speed restrictions on the A628. For more information on the alternatives check out

Websites of opposition to the bypass:
*

For further information on road building schemes in the UK and campaigns against them, check out Road Alert.