After a similar strike just over two weeks ago, hundreds of mental health workers in Manchester are going on strike for a second time today in a row over the suspension of union official, Karen Reissman. 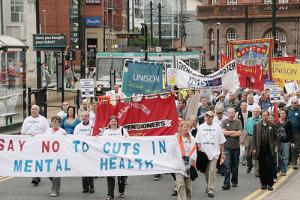 Reissmann, a psychiatric nurse, was suspended in June for allegedly bringing Manchester Mental Health and Social Care Trust into disrepute.

The union Unison said she was suspended for speaking out against job cuts and government policies. The NHS trust has said it is a private employment matter. About 700 workers staged a similar three-day strike last month.

The workers, who are mostly nurses, will be on strike from Monday until Wednesday. The strike covers all in patient, hospital and community psychiatric services across Manchester.