Activists target the RBS Regional Headquarters to highlight the companies investment in projects and companies whi directly proift from climate change, as part of the national day of action against RBS called by the Rising Tide Network. 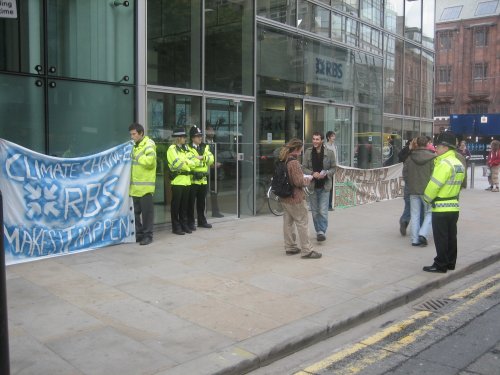 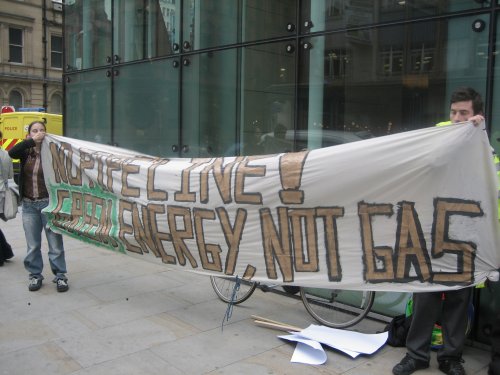 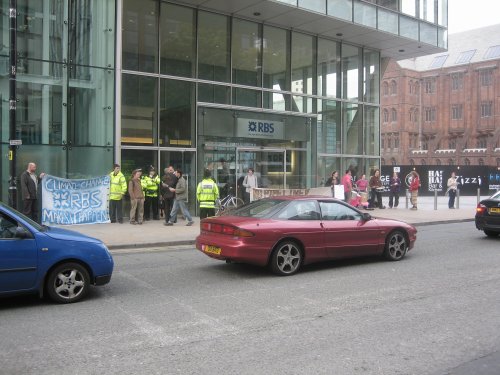 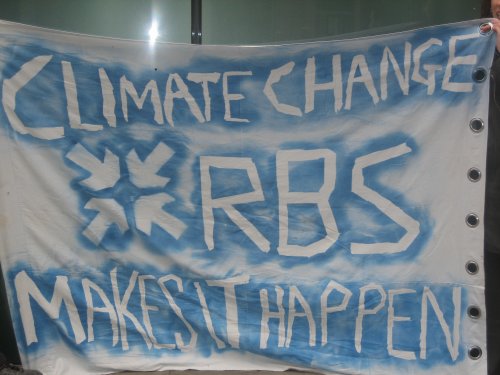 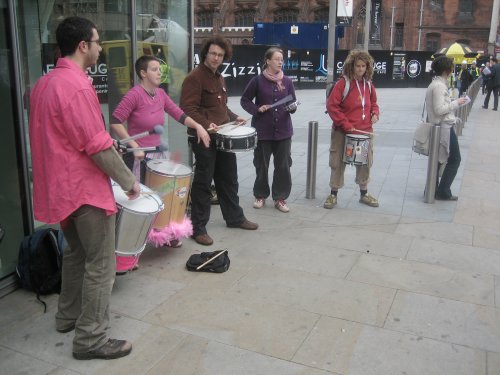 Manchester Climate Action targeted the RBS headquarters on Deansgate, Manchester, as part of a national day of action called by the Rising Tide network.

Local groups which formed to mobilise for this year's Camp for Climate Action, have this morning taken action against RBS, a major backer of the aviation industry and the world's self-described ‘Oil and Gas Bank’.

Banners were displayed reading: 'Climate Change: RBS Makes It Happen' and 'No Pipeline! Green Energy Not Gas'. Protesters were greeted by 3 Tactical Aid Unit Vans and security guards, but despite police attempts to stop noise under the public order act, the samba band played and flyers were given out to workers, customers and passers by.

RBS employs some 5,000 staff in the Greater Manchester area and is the 2nd largest private employer in the area.

RBS provides oil companies with the cash to build and operate drilling rigs, pipelines and oil tankers. RBS also profits through the aviation industry. From the Niger Delta to the Arctic, RBS loans play a key role in forcing open the new carbon frontier, which contributes to environmental destruction,disruption of indigenous peoples and increased conflict across the planet.

RBS is the second-largest bank in Europe and has global assets of over $1120 billion, including UK brands NatWest, Direct Line and Churchill Insurance. Despite creating a heavily green washed public image through sponsorship of sports and the arts, RBS activities have major destructive impacts on the environment and society. The thirty oil and gas finance deals RBS signed between 2001 and 2006 locked us all into 655 million tonnes of emissions over the next 15 years, more than the UK’s entire annual emissions.