Ongoing research by Ding Quarry protestors is confirming the historic importance of the upper sections Rooley Moor Road above the Spodden Valley, known for generations as the “Cotton Road” or “Cotton Famine Road”. 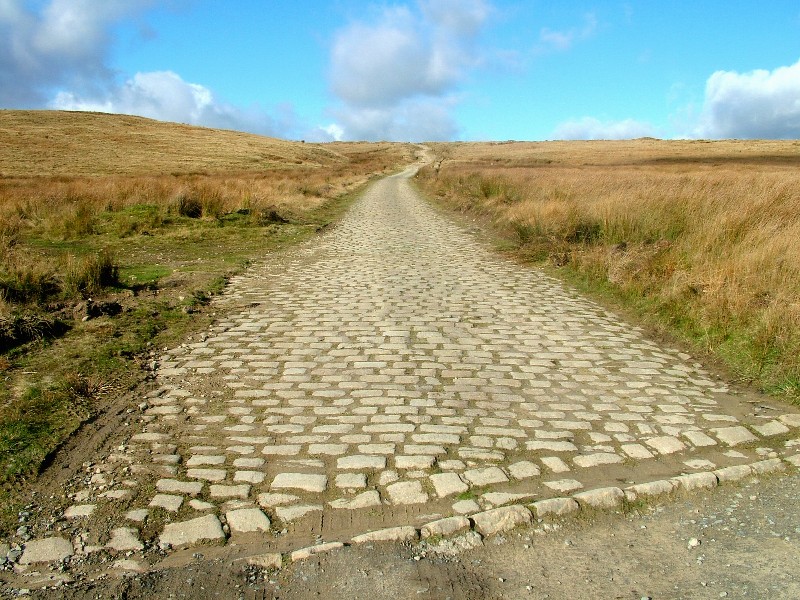 Many visitors to the tranquil Pennine moorland beyond Catley Lane Head are amazed to find a picturesque Victorian stone road untouched by the tarmac and concrete of the twentieth century. At an altitude of over 1500 feet this historic feature may also lay claim to being one of the highest roads in England. Enjoyed by walkers and cyclists, this moorland route also forms part of the Pennine Bridleway allowing safe access for horse riders on the Mary Townley Loop.

Reference to published work by local historians and research collated by the Local Studies Section of Touchstones reveal a connection between Rooley Moor and Lancashire Mill workers in their support of US President Lincoln and the Union cause in the American Civil War.

How did the “Cotton Famine Road” get its name?

The Union blockade of Confederate ports during the American Civil War led to shortages of raw cotton supplies to Lancashire- then the world’s leading producer of finished cotton goods. Although there were some supplies of Indian short staple and Egyptian cotton, the deficit caused by the lack of American supplies was described at the time as a “famine”. Such an emotive phrase could have been particularly poignant for the Irish migrants to Rochdale who had sought sanctuary in the mill town as a result of the “Potato Famine” a generation earlier. They had swapped the blighted fields of Ireland for Lancashire’s dark satanic mills. Unfortunately, in the troubled mid 1860s they were dependent on a factory system that was failing them.

Rochdale District had a mixed economy with wool and fustian textile production in addition to cotton. However, there remained significant hardship for many in the town as a result of the American Civil War:

As the battle of Gettysberg raged throughout 1863, the Rochdale (Poor Law) Union minutes recorded 19,374 town folk receiving “outdoor relief” –a quaint reference to the widespread poverty and starvation that was occurring. The police reports for 1864 show that many of the remaining cotton workers were on short time. In those days before the Welfare State, Rochdale, like many other Lancashire Districts, organised its own Cotton Famine Relief Fund.

Instead of siding with the cotton-producing Confederate States, many impoverished Lancashire cotton workers expressed support with the Union’s cause- in particular, with support for the abolition of slavery.

An explanation was offered by Karl Marx writing in the New York Daily Tribune on 14th March 1861:
"As long as the English cotton manufacturers depended on slave-grown cotton, it could truthfully be asserted that they rested on a twofold slavery, the indirect slavery of the white man in England and the direct slavery of the black men on the other side of the Atlantic."


Rochdale has a long history of international solidarity with other working people. In 1844 our Rochdale Pioneers formed the modern structure of the Co-operative movement.

"I have not forgotten the men of Rochdale, their love of freedom and of truth, and I trust that those who are now struggling, honourably and constitutionally, for the freedom of the black will join in every effort for a fresh instalment towards the Charter of an Englishman's liberty. (applause) Those who pat the slave-owners of America on the backs would like to be slave-owners in England too (cheers and hear! hear!)...I trust that we shall find that in establishing liberty universally throughout the American continent we shall be placing the crowning pinnacle on the ediface of freedom here as well".


In September 1862 US President Lincoln had issued his Proclamation of Emancipation. On New Years Eve 1862, Lancashire cotton workers attended a public meeting at the Free Trade Hall in Manchester. A letter was drafted and sent to President Lincoln. An excerpt reads:

"...the vast progress which you have made in the short space of twenty months fills us with hope that every stain on your freedom will shortly be removed, and that the erasure of that foul blot on civilisation and Christianity - chattel slavery - during your presidency, will cause the name of Abraham Lincoln to be honoured and revered by posterity. We are certain that such a glorious consummation will cement Great Britain and the United States in close and enduring regards."

This letter travelled from Manchester across the Atlantic and elicited a considered response, drafted by a President at war- all in little over 2 weeks.

Abraham Lincoln’s swift reply acknowledged Lancashire’s hardship as a result of the Cotton Famine:
"...I know and deeply deplore the sufferings which the working people of Manchester and in all Europe are called to endure in this crisis. It has been often and studiously represented that the attempt to overthrow this Government which was built on the foundation of human rights, and to substitute for it one which should rest exclusively on the basis of slavery, was likely to obtain the favour of Europe.
"Through the action of disloyal citizens, the working people of Europe have been subjected to a severe trial for the purpose of forcing their sanction to that attempt. Under the circumstances I cannot but regard your decisive utterances on the question as an instance of sublime Christian heroism which has not been surpassed in any age or in any country. It is indeed an energetic and re-inspiring assurance of the inherent truth and of the ultimate and universal triumph of justice, humanity and freedom.
"I hail this interchange of sentiments, therefore, as an augury that, whatever else may happen, whatever misfortune may befall your country or my own, the peace and friendship which now exists between the two nations will be, as it shall be my desire to make them, perpetual."

Later in 1863, as the cotton famine grew, Britain’s Parliament passed The Public Works (Manufacturing Districts) Act. This allowed the town’s Board of Guardians to borrow money at a low interest rate. Work-creating projects included “…improvements in Catley Lane”. The 1851 Ordnance Survey map shows part of the track, now known as Rooley Moor Road, was once called Catley Lane.

Prior to the Confederate States seceding from the USA, British Ordnance Survey maps show that a significant section of the track from Cowpe to past the old Moorcock Inn, was a mere "footpath". This would not be unusual as the main modes of moorland transport were by foot or packhorse.

There are scant records to categorically confirm that the road improvements were for the “Cotton Famine road” over Rooley Moor. However, maps drawn in the years after the American Civil war show the former footpath had changed to a proper road. This is the wide, metalled road we can still see today. The large stone setts of these sections of Rooley Moor Road are contemporary with other Rochdale roads laid in the mid to late 19th Century.

In the 1920’s, within living memory of the American Civil War, local historian Ernest Price wrote his History of Norden. Reference is made to the “Cotton Road” over Rooley Moor.

As Northern folk we are often “backwards in coming forwards”. We don’t brag about our heritage- it is not the way we do things. Therein lies the rub. There has been no concerted push for designating the Cotton Famine Road a Conservation Area or Scheduled Ancient Monument. We don’t appreciate what we have until it is threatened.

We now face such a threat: a quarry company wants to use the Cotton Famine road. They want Heavy Goods Vehicles to transport up to 28 million tonnes of rock along it. One wagon every 2 minutes from 7am for the next 30 years- over a road built for horses and carts. The Environmental Statement submitted for the developers concludes that there will be “no alteration to the cultural or archaeological heritage of the area”. [p287].

We disagree. Our Cotton Famine Road is a tangible reminder of local hardship caused by an historic conflict across the Atlantic. The fight against slavery of African-Americans was a principle upheld, despite considerable suffering, by the working people of Lancashire. It appears that for meagre poor relief in the 1860s, unemployed Rochdale men broke rocks and surfaced the road over the Rooleys. These historic sections of stone road across our tranquil Pennine moorland warrant recognition and legal protection. If this is to happen, our elected representatives must act quickly.

Given our Cotton Famine Road’s historic and cultural importance it may be unthinkable to many people, worldwide, that almost 2 million quarry wagon journeys could be permitted over the next 30 years.


Say NO to Ding Quarry