The IWW (Industrial Workers of the World), the UK’s only revolutionary, rank-and-file, autonomous union, is getting ready to wreak havoc on National Blood Service (NBS) bosses if they don’t scrap cuts plans. 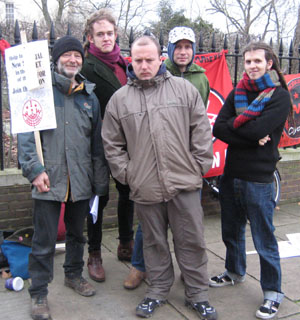 The last year saw the IWW and their allies launch a nation-wide campaign to prevent NBS management from enacting dangerous cuts that will only serve to ease their own workload. IWW members in the NBS’s recognised unions (Unison and Unite) have also been at the forefront of the campaign to push the big unions to act against the plans, rather than seemingly roll over and let management do whatever they want.

NBS bosses plan to centralise thirteen blood processing centres into three ‘supercentres’ in Colindale, Manchester and Bristol. This means 600 jobs will be slashed and local economies and labour markets are going to be hit hard. What’s more, the transport of blood will be even more reliant on our already-overcrowded and polluting road system, with many hospitals more than 100 miles from the nearest centre. Put simply, these plans are a danger to workers, communities and patients.

Of course, the threat of privatisation looms heavily over the NBS, and many see this as a route towards the piece-by-piece selling-off of the NBS to various profit-hungry and irresponsible companies.

As a result of the campaign, the Board of Directors issued an ‘independent’ report with the management consultants McKinsey and Co., which is due out on February 1st. The IWW and their supporters are preparing to hit NBS bosses hard if they don’t scrap the plans. IWW members in the NBS are also calling for greater workers’ control, as well as a transparent and recallable board of directors, elected by the workers themselves, as a bare minimum.

Adam, one IWW activist, warned NBS bosses about the backlash they should expect: “If they think they’re going to get away with these cuts, they’re wrong. We’re taking these clowns on, and we’ll fight them all the way.”

Please get in contact with us if you want to help the IWW with joining in actions in this crucial campaign in the coming weeks, and build a powerful and militant union within the healthcare sector.