On Monday morning, 17th September, activists hit the streets of Manchester to expose Barclays and their involvement with Huntingdon Life Sciences and the NYSE. 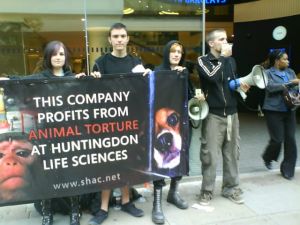 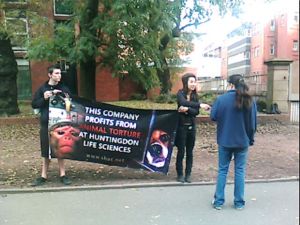 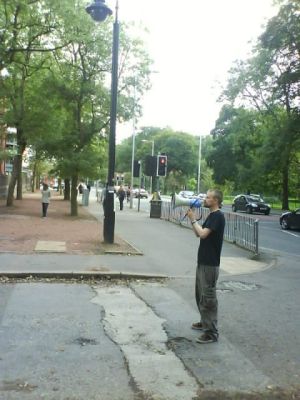 The first branch was their fancy new bank on Market Street, the busiest pedestrian street in Manchester, where banners were held outside and chants echoed around the streets revealling Barclays' support for animal abuse. The public were very supportive and some vowed to close their accounts, obviously disgusted that a high street bank would back the puppy killers at HLS.

Next was another branch and offices of Barclays along a busy main road into the city centre. When we described the monkeys inside HLS being caught in the wild, locked in cages and poisoned to death some of the younger, and more supportive, staff said they felt bad working with a company that backs animal abuse. The manager also told us he'd get onto the Head Office about the issue.

The Manchester University branch was next, on a busy cross-roads at Oxford Road. The bank was emptied and cars driving past honked their horns in support, obviously disgusted at Barclays holding HLS & NYSE stock.

We then popped round the corner to the new University of Manchester vivisection facility where security decided to jump on an activist and tried to smash up the megaphones. Obviously they don't like people exposing the truth about their beagle kennels and marmoset breeding facility. We will be back to the site and keep pressure on the academic animal killers.

Next we went back to Barclays in the town centre and chanted for over an hour where public support was great and more people said they'd close down their accounts until the bank made some ethical decisions and dumped their HLS/NYSE stock.

Last stop was the Manchester Barclays office / bank where we saw the staff out and gave them information about their company's dealings in animal cruelty.

We will travel to the ends of the earth to close you down Huntingdon, rest assured!