On the occassion of the first death anniversary of Nawabzada Bala'ach Marri, member of the Baluchistan state assembly who was killed during his struggle against Pakistan army, strikes were observed all over Baluchistan. Texas-sized Baluchistan was annexed by Pakistan against the wishes of its people in March 1948. The state has witnessed five bloody uprisings. 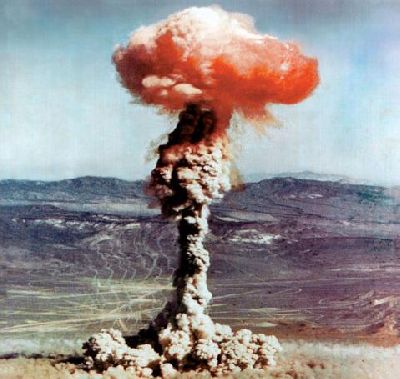 Site of Chagai nuclear tests May 1998.

WASHINGTON DC: Pakistan President Asif Ali Zardari, whose spouse Benazir Bhutto is widely believed to have been assassinated with Pakistan army involvement, has been urged to convene a summit meeting in London to address the unresolved Baluchistan issue as the province marked the first death anniversary of state assembly member Nawabzada Bala'ach Marri.

Marri was called Baloch Che Guevra and was one of the six sons of veteran nationalist leader Nawab Khair Baksh Marri.

On the occassion, the American Friends of Baluchistan founder Ahmar Mustikhan sent a letter to President Asif Ali Zardari requesting him to call a meeting in London, with NATO as an international observer, to find a lasting solution to the bloody crisis.

Zardari, who is a Baluch, was requested to act fast before the Pakistan army generals boot him out--the South Asian nation has remained under military rule for more than half of its independent existence. Mustikhan deplored the continued killing of the Baluch and is spearheading an international campaign to collect 100,000 signatures to have the nuclear tests stopped in Baluchistan

Mir Noordin Mengal, a nephew of the slain leader who is himself is an activist with The Netherlands-based Unrepresentated Nations and Peoples Organization in Europe told the Indy Media on phone from Dubai that a meeting was held in Dubai to pay tributes to Nawabzada Bala'ach Marri.

"There have been complete strikes in many cities and towns across Baluchistan," Mengal said.

Following is the full text of Mustikhan's letter:

You know my family quite well and might also be knowing about my journalism and activism work from the platform of the American Friends of Baluchistan.

You have been a close friend and classmate of a late cousin, having shared the class bench with him at the Karachi Grammar School. Both you and your respected father Hakim Ali Zardari have been to our family home in Karachi many times.

Your ailing mother-in-law Mohtarma Nusrat Bhutto had been a family friend. My late uncle Sattar Mustikhan was one of the dozen people who attended her nikah [marriage vow]with Zulfikar Ali Bhutto. The newly-wedded couple had borrowed his car when they went into hiding. Likewise, Zulfikar Ali Bhutto's elder brother Sikander Bhutto was almost a daily visitor at our old family home in Garden East, in Karachi of yore.

I am writing you on a day of great loss to the entire people of Baluchistan. The Baluch in Baluchistan, Sindh, Punjab, Gulf, Europe, the United States and Canada are mourning the death of one of their great heroes Nawabzada Bala'ach Marri, who like his legendary father Nawab Khair Bakhsh Marri never compromised with the real rulers of Pakistan, the military generals. We deem the generals responsible for the killing Nawabzada Marri exactly one year ago. They are the same generals who killed former premiers Mohtarma Benazir Bhutto, Zulfikar Ali Bhutto, Huseyn Shaheed Suhrawardy and Liaquat Ali Khan.

The American Friends of Baluchistan will pay International Tributes to Nawabzada Bala'ach Marri in Washington DC on November 29.

Needless to say, the army's secret service Military Intelligence had also killed your estranged brother-in-law Mir Murtaza Bhutto and then tried to frame you for his murder.

But of course the worst atrocities have been committed on Baluchistan, by far. I know you take great pride in being a Baluch and have this God-given opportunity to be of great service to them and to the rest of the humanity by presiding over the peaceful balkanization of Pakistan.

You know quite well the Baluch never wanted to become part of Pakistan. The Texas-sized state was annexed against the wishes of the Baluch people while the Khan of Kalat was in military custody in Punjab. That the annexation was fake, forged and fraudulent is clear from the very fact that there are different dates on which the Khan of Kalat Mir Ahmedyar Khan signed the Instruments of Accession and on which Muhammad Ali Jinnah signed that black document.

No Baluch have accepted that forged document that got signed at gun-point and will never do so. Shaheed-i-Baluchistan Nawabzada Bala'ach Marri proved this by sacrificing his life.

Nawabzada Marri's father Nawab Khair Bakhsh Marri is loved by the Baluch as a leader of their national movement for bravely challenging Pakistan's ruthless army for more than three decades now .

Another key player in Baluchistan is Sardar Akhtar Mengal, president of the Balochistan National Party and a former chief minister, who is widely respected as the Nelson Mandela of Baluchistan. Mengal braved extreme torture in Pakistani jails while his elder brother was assassinated by Pakistan's secret service and his body was never found.

Equally important is Nawabzada Brahamdagh Bugti, young leader of the Balochistan Republican Party and grandson of slain leader Nawab Akbar Khan Bugti. He has ruled out any compromise on the Baluch right to sovereignty over their homeland and is valiantly defying the Pakistan army occupation of Baluchistan.

Thousands of students and youths, organized under the banner of the Baloch Students Organization, are yet another potent force in Baluchistan politics. These youths have challenged the Pakistani occupation forces and scores have been killed over the years. Just two days ago one such youth died in the Baluchistan town of Mashkay in firing by Pakistan's paramilitary force called Frontier Corps-- the same force that supports the Taliban in its operations against the International Security Assistance Force.

A significant development in Baluchistan in recent years was the departure of the De Jure Ruler of Baluchistan Khan of Kalat Suleman Daud Ahmedzai from Pakistan. Ahmedzai who is the head of the erstwhile government of Baluchistan or "Khanate of Kalat" -- a more than 400 years old institution. Ahmedzai has sought asylum in the United Kingdom. He has taken a solid stand for Baluch rights and believes international mediation is the only way out to end the Baluchistan conflict.

In spite of divergent methodologies, all these leaders and parties are secular and have been united on the question of Baluch sovereignty over their land and resources, which means withdrawal of Pakistani troops that have been killing, maiming and enslaving the Baluch for more than 60 years now.

It's not just minor issues, the Baluch have serious differences with Punjab in the world outlook. We know we are a secular people, while those who matter in Punjab are mostly jihadis, baring a few exceptions like Najam Sethi, family of the late Mazhar Ali Khan and a handful of others.

Conservatives Punjabis on the upper echelons are supported by the freeloaders who came from India and who style themselves Mohajirs. It is unfortunate jihad is an article of faith for them. Jihad in Baluchistan, jihad in Afghanistan, jihad in India and as far as Bosnia and Chechnaya. In fact the Inter Services Intelligence, under General Mehmud Ahmed, is widely believed to have played a major role in the 911 attacks on the U.S.

What we see as a result is innocent victims, from New York, to New Delhi to the hills of Bhambore where the Pakistan army martyred Nawab Akbar Khan Bugti, former governor and chief minister of Baluchistan in August 2006.

To me, Pakistan is one of the worst sins of the white man in the last century.

You know very well what the Pakistan Army did in the erstwhile East Pakistan, now Bangladesh. They killed three million people and raped half million of their women. And they even did not spare even one of the best politicians Pakistan ever produced, Zulfikar Ali Bhutto, ignominiously beating and killing him in the dark dungeons at the military headquarters.

Returning to Baluchistan, you know well the Baluch people have fought at least five wars of liberation against Pakistan army. We are going to keep up the good fight until the very last Baluch. Pakistan owes Baluchistan tens of billions of dollars in unpaid monies from natural gas and mineral resources.

Tens of thousands of people have been killed resisting this loot and plunder. Salutes to the unknown soldiers.

We saw towering Baluch figures being killed by the Pakistan army in the last 60 years. These honorable sons of the soil include Nawab Nauroz Khan Zarakzai [who died in prison at the age of 90], Nawab Akbar Khan Bugti, Nawabzada Bala'ach Marri, Mir Asadaullah Mengal, Mir Safar Khan and a galaxy of others. Many spent years and were tortured in Pakistani jails: Agha Abdul Karim, Mir Ghous Bakhsh Bizenjo, Nawab Khair Bakhsh Marri, Sardars Akhtar Mengal, Sardar Ataullah Mengal, Abdul Nabi Bangulzai, among others.

On top of all the military brutalities, killing, maiming and jailing of the best sons of Baluchistan, Pakistan conducted its nuclear tests in Baluchistan against the explicit wishes of the Baluch people on May 1998, destroying thousands of acres of Baluch lands forever. A Punjabi prime minister at the time, Mian Nawaz Sharif, shamelessly declared tests changed the black “mountains into white.”

All of this must stop and now is the time to work in conjunction with the upcoming Obama administration to set things right.

I look with appreciation your sincere desire to solve the Baluchistan issue and just as most Baluch leaders have already told you we have serious reservations about the powers you command.

But if you are earnest in your desire for peace, you may please convene an International Conference on the Future of Baluchistan in London.

The participants must include all the Baluch chieftains that attended the historic jirga in Kalat under the leadership of the Khan of Kalat, Suleman Daud Ahmedzai, in September 2006 plus of course the most revered Nawab Khair Bakhsh Marri, Sardar Ataullah Mengal and Nawabzada Brahamdagh Bugti.

Those who must have mediation status at this conference should include ambassadors on the U.N. Security Council and nations represented in the NATO—the NATO has emerged has a key player in the region and the Baluch will welcome their presence.

If such a conference decides on a peaceful balkanization of Pakistan nothing like that. The entire humanity will be indebted to you. If you do so, history will treat like a hero just like President Mikhail Gorbachev of the former Soviet Union.

Please do it now before the Pakistan army GHQ does to you what it has done to so many others before you.

We will still consider the Punjabis and Mohajirs as our brothers as long as their military boots stay out of the sacred Baluch soil.