On Monday 12th Jan 2009 between 1830 and 2100, free expression occurred
at terminal three of Manchester International Airport. A protest was held by Climate Rush in a designated zone away from all passengers and prying eyes with a cordon for the press and some police horses.

Approximately one hundred protesters descended decorously to make their
views on airport expansion known. Edwardian dress was the order of the day,and we didn't disappoint. Top hats and tails, corsets, shawls and a street urchin all made an appearance. 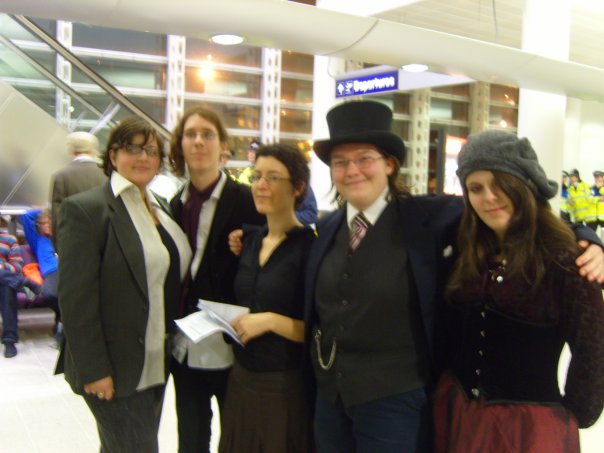 Bradford and Manchester activists at the Northern Climate Rush

The police were trying to beat us at our own game by leafleting – colour
flyers detailing the restrictions on the protest and specifying which lines
we were not allowed to cross. We weren't allowed to enter the building
without taking a flyer.

Police deployment was so large in Operation Overkill that they predicted up
to two hundred baby eating anarchists ready to disassemble planes. Or a bunch
of students , or a few anarchotroublemakers and chaos merchants (which is
what they got). In return, they had horses outside, a fair few employees on
overtime, and also had waiting tactical support unit vans crammed with 20
officers each.

Protesters' initial thoughts that direct action was The Only Way were
confirmed.


The protest consisted of : a fantastic banner, many people, a string duet
(half a quartet, at least); picnic a-plenty, and a brief spiderman
impression.

We came, we ate, we danced, we Made Our Feelings Known.

There was (that we know of) one arrest.

The protest was against airport expansion and domestic flights. In a time of
recession and climate crisis, government money should be spent on
improvements to rail, trams, and buses, not on subsidies and infrastructure
for the aviation industry.

We have waited too long and been misled too many times. It is time for us to take control and to lead social change.


See below for reports on the Northern Climate Rush