Around 35 students held a climate change ‘Eviction Demonstration’ outside (and on top of) a Royal Bank of Scotland branch at the University of Manchester Students Union on Wednesday 11th February 2009. The group from People and Planet have submitted a motion to the Union General Meeting proposing that the Union does not renew the lease for RBS’ branch when it expires in January 2010. 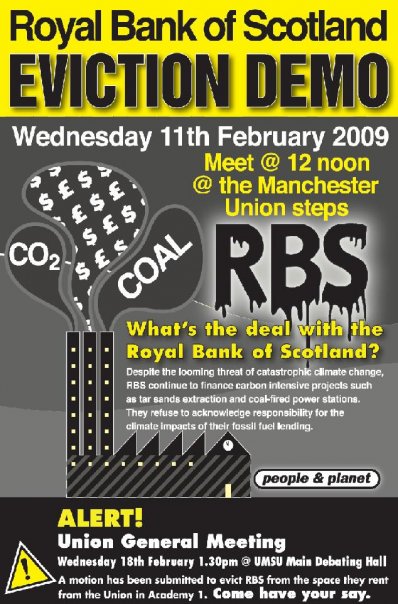 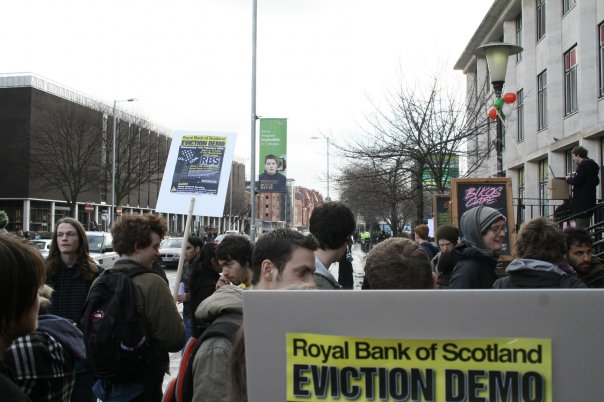 Gathering at the Student Union steps 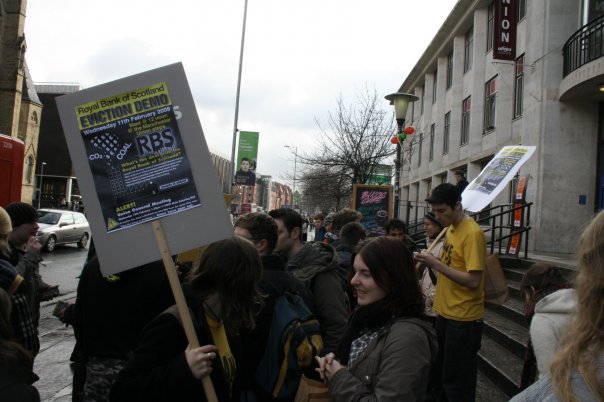 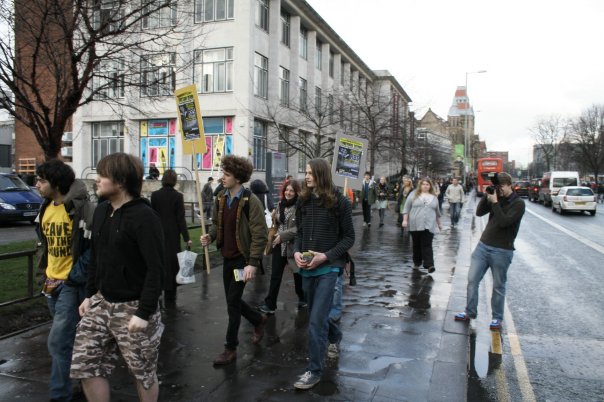 Heading towards our local branch 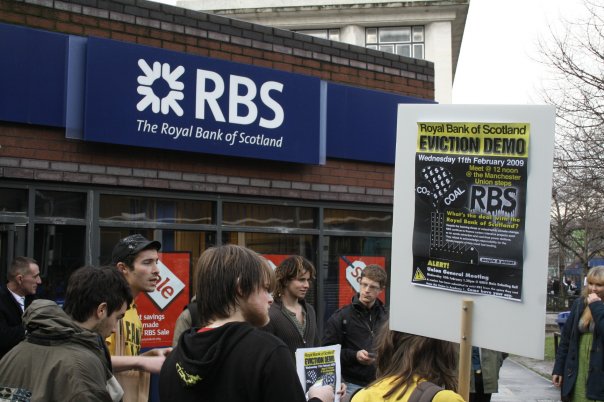 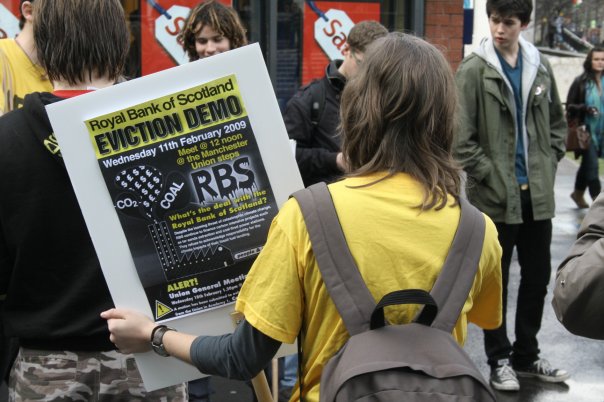 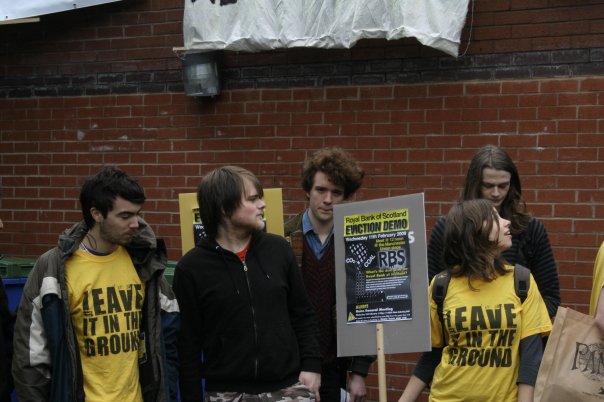 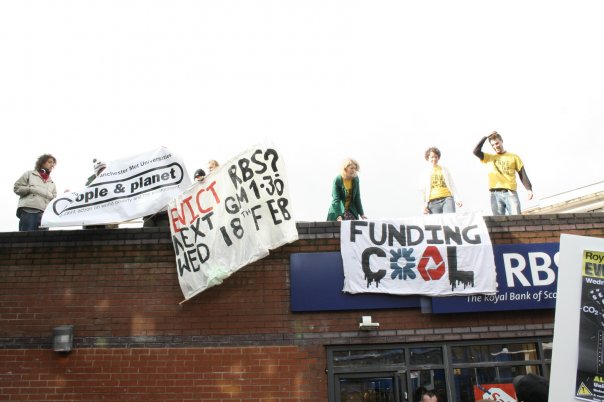 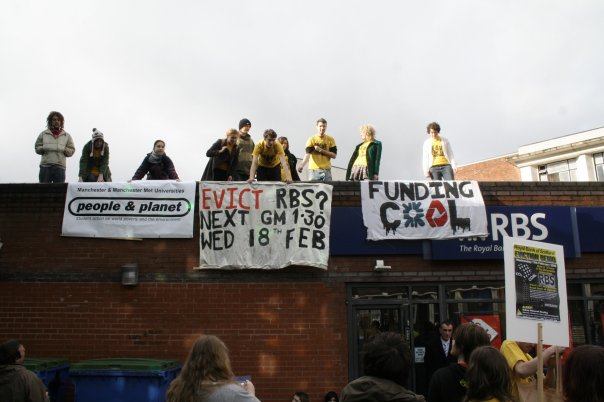 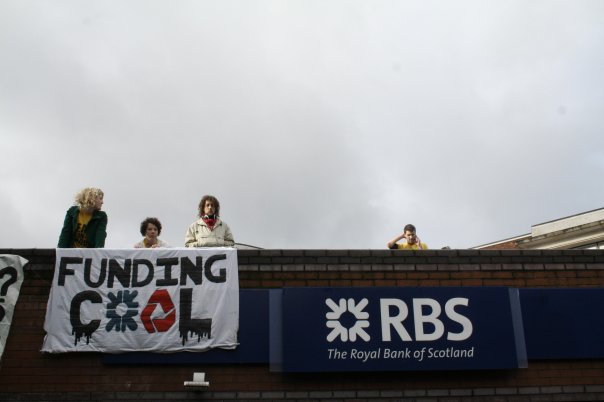 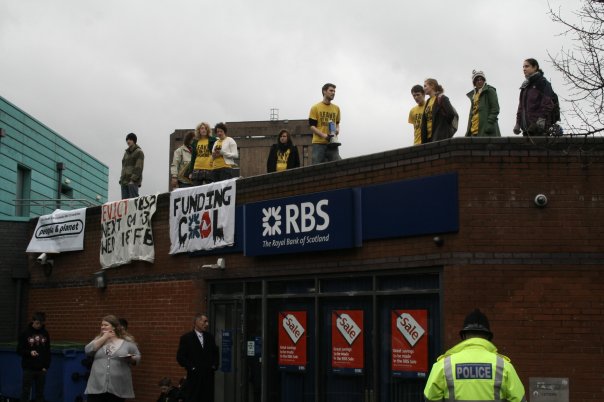 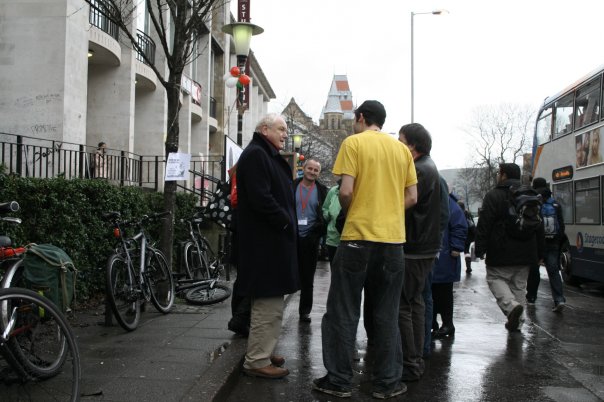 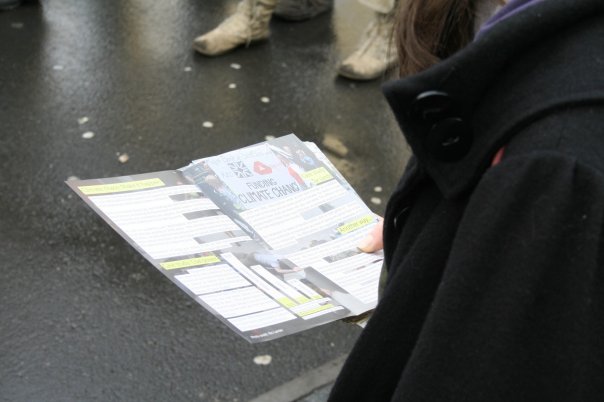 With flyers in hand...

The demo began on the steps of the Student Union at noon. RBS had hired in extra security, and the campus cops were sniffing around. So a group went to the front of the RBS and talked loudly of their plans for ‘rapid information dessimination’.

Whilst this distraction ensued, tieing up security, a second group snuck round the back and climbed aboard the roof. From here they dropped banners advertising RBS’ fossil fuel investments and advertising the Union general meeting the following week.

Meanwhile the rapid information dessimination went ahead with everyone racing off to speak to as many people as they could in 20 minutes before returning back to the RBS branch to compare scores.

The Royal Bank of Scotland provided $16 billion for coal companies and exploration projects from May 2006 to April 2008. This has included some of the dirtiest and most dangerous oil and gas projects including the Baku-Ceyhan pipeline in Tiblisi, Georgia which has been criticised by Amnesty, WWF, and Friends of the Earth for its human rights and pollution impacts. The embedded emissions from RBS loans total more than those of the whole of Scotland.

Toby Brett, 19, Physics Student at Manchester University says; “We hope to send a clear message to RBS that if they continue with their irresponsible investments then they will not be welcome to rent branch space from our student union.”

This action was part of a wider national campaign calling for a boycott on RBS in September 2009.

And awarded RBS a spoof greenwash award at their regional headquarters in Deansgate.
(

are you aware that almost 70 per cent of RBS are owned by the UK government? it might be worth mentioning it since the boss has to report to gordon brown

Hit The Roof but stay away from the Edge

I thought Manchester students were wiser than this: occupying campus buildings, especially rooftops, are not only dangerous but unproductive.
This is a FINANCIAL ISSUE.
Act in a FINANCIAL WAY.
Go to shareholder meetings (hopefully you are a shareholder) and complain there.
This a good time for shareholder revolts, not campus rebellions.
Have you not learned anything from the idiocy of the 1960's?

Opinion piece - Should we evict RBS from Union property? - YES 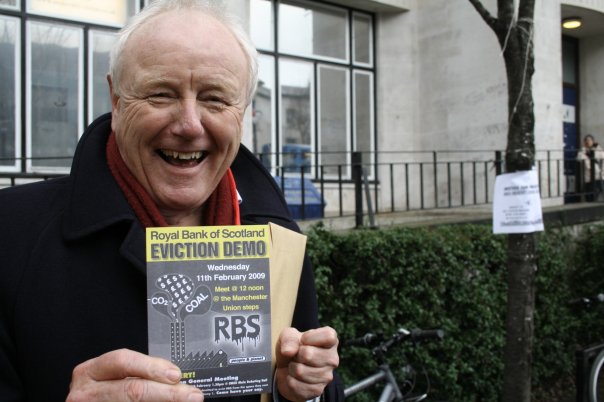 "Cut off their bonuses!" said one man on the street

This article originally appeared in Student Direct on February 16th 2009

RBS are one of the most aggressive companies in bidding for fossil fuel projects. People & Planet’s Toby Brett says get them off campus, NOW.

The Royal Bank of Scotland. Adrenaline-fueled bankers who have not only buggered the economy, but whose irresponsible risk-taking goes beyond the stock market, including gambling with our climate, too.

There are frequent new warnings of the dire scientific predictions for the world if it carries on with a “business as usual” attitude, and the corresponding rise in greenhouse gas emissions. Extreme weather systems, floods, droughts, water shortages, crop failure; the warnings are there. So what makes RBS such a key culprit in this global problem?

RBS is the largest investor in fossil fuel industries out of all the UK banks, at one point even calling itself the “Oil and Gas Bank”. Its Oil and Gas Team are not just distant partners; they are active ones, facilitating meetings to help yet more fossil fuel projects off the ground. Other banks have noted that RBS are usually the most aggressive player when bidding to provide loans for fossil fuel projects.

For example, take RBS’s recent funding of tar sands extraction in Alberta, Canada. The tar sands are a particularly carbon intensive source for oil production, and are only commercially viable when the price of oil is high enough. Extraction consists of destroying the fragile boreal forests, a valuable carbon sink that covers the land, and then tearing the ground up by strip mining. The refining and processing of the tar sands, a clay-like mixture of sand, water and oil, releases three times the carbon dioxide of regular crude oil.

RBS try to portray themselves as “financing the transition to a low carbon economy”, in the words of their promotional literature. Naturally, they should be commended for providing $2.6 billion for the renewables industry. However, this is eclipsed by the $16 billion they provided to coal-related projects such as a new coal-fired power station at Kingsnorth in Kent. Coal is the dirtiest form of energy production, causing 70% more carbon emissions than an efficient gas power station. So much for financing the change to a low carbon economy.

It is true that there is still a demand for oil, gas and coal. But the investments of RBS maintain the expensive infrastructure that perpetuates this demand. The move to a low carbon economy is hampered, not helped, by RBS’s investments. No government will be eager to reduce its reliance on fossil fuels if they have industry lobbyists on their doorsteps complaining that their expensive new power station must be decommissioned due to climate concerns.

There are those who say that if RBS are evicted from Union property, it won’t change anything. However, the recent actions against RBS in Manchester are part of a much wider national campaign. If RBS begin to feel that their investment portfolio is costing them prime branch space on the high street, then this will send a very strong message right to the top. Let us not forget the national student campaign against Barclays in the 1980s. Barclays were the biggest bank in apartheid South Africa, but a sustained campaign across the country decreased their student market share from 27% to 15%. Eventually, in 1986, Barclays pulled out of South Africa.

What are the costs of not renewing RBS’s lease? A more ethical alternative to RBS is required to ensure the Union doesn’t lose any revenue. Furthermore, we will ensure that RBS management liaise with trade unions to guarantee that the small number staff who work at the Academy 1 space are relocated to its many other branches in the city. The staff there already work at other branches; Academy 1 RBS is itself a sub-branch of the Precinct Centre branch.

Shutting down this branch will send a clear message to the bank that it is no longer socially acceptable to continue funding a path to climate chaos. Students are a key target market for high street banks. Our Students’ Union is democratically run by the student body, giving us a unique opportunity to make this statement to RBS, an opportunity that we do not have on the high street. It is important that we do not sit idly by as irresponsible bankers play hard and fast with our economy, our planet and our future. Nature does not do bailouts.